The Delhi Half Marathon 2018 was just conducted yesterday, at the Jawaharlal Nehru Stadium in Delhi.

Organised by Airtel, the marathon is in its 14th year now and had athletes and runners who had been practicing for this marathon for months now, participate in a 21 kms race. It stretched across the stadium as well as various places in central Delhi before finishing at the starting point.

The marathon is looked forward to every year with great enthusiasm, but Delhi’s rising pollution problem has been putting a damper on the event.

This year, just a few days before the marathon, the city’s air condition was declared as “very poor” on Saturday and doctors and experts expressed their worry about the marathon being conducted in such a bad condition.

It was considered risky to expose the participants to these harmful atmospheric pollutants, and various doctors even talked about postponing the marathon till the air quality was better.

Going according to the India Meteorological Department (IMD)’s forecast that was sent on Saturday to the Central Pollution Control Board (CPCB), an official from the latter organisation said that, “We are not expecting any improvement in air quality in the next couple of days. Even on October 22 (Monday), the wind direction will be westerly.”

The air quality of Delhi has been at a constant stage of “poor” with the AQI dropping to 292 but on October 17th and Saturday that is 20th October 2018, the quality did drop to “very poor.”

However, apparently that did not deter the participants or the organisers from holding the event, since almost 35,000 people were seen taking part in the marathon.

What Did Airtel Do?

For their part, the organisers of the event, did take up some good measures in order to ensure that the participants were not affected so badly by the air pollution.

From moving the marathon from November to October, in order to avoid the Diwali pollution, to also using ultra high frequency (UHF) radio waves to keep the air clear for runners, Airtel did its part well.

The UHF radio waves for that matter would dispel pollution of the small particulate matter that can be inhaled by the runners and harm the lungs.

The date was preponed specifically to avoid the increase in pollution that the festival of Diwali sees due to the high number of crackers being set off across the city.

Along with that, the organisers also dropped water vapour from a height of about 6 meters, along with water fans in order to settle down the dust that was in the path of the participants.

Perhaps because of these measures, there were no incidents reported related to air pollution and as told to Reuters by Vivek Singh, the Managing Director of Procam International, a race promoter, the air pollution was reduced by “at least” 30 per cent while the race was on. 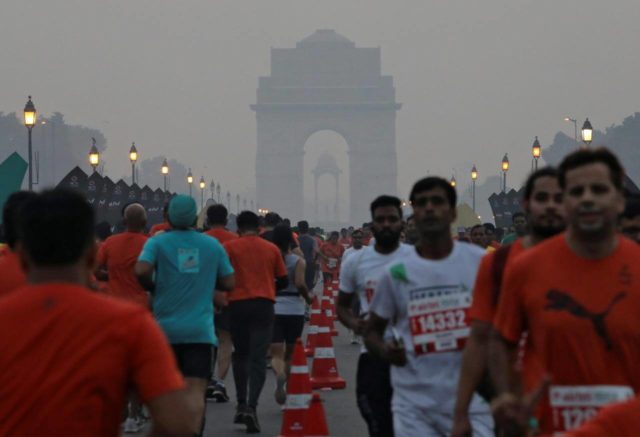 Read More: Which Is The Right Air Mask You Should Be Buying To Protect Yourself From Delhi’s Air Pollution

What Was The Reaction Of The Participants?

There were some people questioning the event and why it was still being held even after warnings about the high air pollution level.

Why is @Airtel_Presence sponsoring the #Delhi half marathon only to subject runners to very unhealthy pollution. This is counterintuitive making little sense #marathon #AirtelDelhiHalfMarathon

Dear @ArvindKejriwal if emergency measures have kicked off in Delhi because of extreme pollution, how is the Delhi half marathon being allowed on 21st October where 35000 people will be running. Does the state have any responsibility towards people’s health? #MyRightToBreathe

#ADHM2018 when in delhi, half marathon turns into "haanf" marathon due to the choking pollution.

Two days back there were warnings of pollution peaks in Delhi in the media. This morning , the Airtel half marathon at Delhi was duly conducted and duly won by athletes of African Origin who have been duly… https://t.co/pK2SQXdUaC

But there were also those who believed in running for a cause and that was majorly to bring more awareness to the air pollution crisis in Delhi.

As per Times of India, Shweta Singh, who is a professor at the Ashoka University in Sonepat, said that she was glad the marathon was shifted to October since the air quality has not yet deteriorated. Apparently, she started running around eight years ago due to health related reasons and till yet had participated in marathons across India and abroad.

Another runner, Amod Bhate, an IT professional, had come from Pune to participate in “one of the best organised races.”

He added that, “It would be better if the marathon is kept during this period when it is not that cold and the air is not bad.”

Emily Jackson, a carbon market analyst who was participating in such a marathon for the first time, apparently told ABC news that, “I did doubt signing up, but it was just the usual morning haze, and didn’t feel hard to run in.”

At Airtel Delhi Half Marathon, run with my father, who finishing time is 3 hrs 04 minutes andI finished the race with…

If You Have Poor Maths Skills, Blame It On Air Pollution Now