Chetan Dahiya, a top model and actor is inspiring others with his acts of kindness towards animals 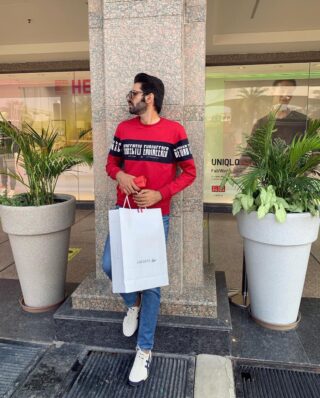 Delhi [India] : Bollywood is fortunate to have got many treasured gems from small towns. We have seen many talented young actors from villages or small cities making it big in the Fashion and Film Industry in India. Even big production houses today give opportunity to fresh faces and new talent and promote them on the big platform. We bring you one such young and talented actor who is all poised to make his mark on the OTT.

Young, restless with a distinctive charm of his own, meet – Chetan Dahiya, an Indian Model and Actor. Chetan Dahiya is famous for Mr. India Glamour Finalist 2019. With the right looks, expression and talent, here is a top talent from Haryana who is all set to play a lead in some interesting projects.

Yes, sources confirm that Chetan is all set to make his web series debut. This handsome young actor is soon to be starred in a web series by ALT Balaji & Netflix. He will also be seen starring in a new Punjabi track. As per sources, he has bagged a lead role in an upcoming music album by a top production house. Talks are on with leading models and newcomers for the female lead to star opposite Chetan. He had been invited to India Runaway Week 2019. Chetan is sure to steal the screen presence with his effervescent smile, those deep warm eyes and stylish looks. His charming personality has gained him a huge fan following on Instagram and other social media platforms. From his unkempt long hair look to the cool guy in the jacket look to the smart and sauvé look in formals, Chetan’s captivating photos on Insta are a treat to look at.

Chetan Dahiya was born in Sonipat, Haryana. He has attended 3 different schools and finished his schooling at Swarnprastha Public School, Sonipat. He has been an athlete at national level and participated in state level football competitions over the course of his school years. He has always been good in academics and is a merit holder. He was a topper in all three years in his graduation years (University of Delhi). He was also elected as College President in second year. Later, he pursued Law from Faculty of law (University of Delhi).

Chetan Dahiya is a big animal lover. An inspiring story of hopes and dreams, Chetan’s love for animals was sparked by an incident. It started a year ago, when he saw many cows in pain and street dogs in hunger. He couldn’t control himself from loving them and taking care of them. Many of his friends and people in his network took inspiration from Chetan and are now taking care of these sweet and so loveable animals. Says Chetan, ‘It makes me very happy to see people around me following my footsteps to feed and take care of the animals. I feel I have made a small yet significant difference in the lives of animals who just want our love and will give an abundance of love in return.’

With a major web series and a punjabi music album on the horizon, Chetan Dahiya is bound to make his mark on the big platform. Already a popular name in the industry, watch out for Chetan Dahiya from Haryana. This rising star will definitely be on your radar. We wish him the best for all his upcoming projects.

Facebook
Twitter
Pinterest
WhatsApp
Previous articleJaipur Audition for Elite Miss Rajasthan 2020: We are coming on 8th November with corona precautions
Next articleWorld Famous Artists Who Were Detestable People In Reality