The Delhi riots seem to continue on and strike fear and terror into the hearts of the citizens of Delhi. As per latest reports the death toll has risen to 37 and the injured are only increasing in number with some revealing the number to be above 200.

Delhi CM Arvind Kejriwal has also announced that a compensation amount of Rs. 10 lakh will be paid to families who have lost someone in these riots, while the injured will receive Rs. 5 lakh.

Central Board Of Secondary Education (CBSE) has also postponed the board exams of Class 10 and 12 that were set to happen on February 28 and 29.

In the midst of all this chaos, National Security Adviser (NSA), Ajit Doval recently visited the violence-hit areas of northeast Delhi on behalf of Prime Minister Narendra Modi and Home Minister Amit Shah.

He interacted with the people there and assured them that peace will soon be restored and that they need not have any fear. One incident has stuck out though and seems to tap into the exact emotion of the people there. 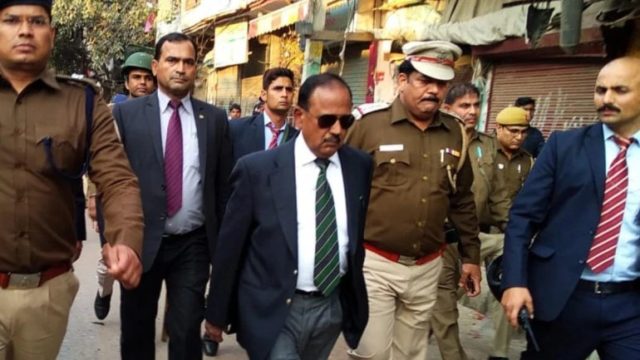 College Student Said “We Are Not Safe”

According to few news reports while Ajit Doval was at ‘ground zero’ a burqa-clad college student approached him and tried to inform him of the situation there.

When speaking to Doval she said, “I am a student, we are feeling very unsafe and cannot sleep at night,” and also that, “Our houses and shops are being torched…. We are not fighting.”

The student’s part starts from 1.02 in the video. She can be heard saying that, “Sir, we have been living in constant fear. I have not been able to go to college. Our brothers are trying to protect us.” She further added that “Delhi Police is not doing its job,” and that “We are not safe” (perhaps referring to the people in the riot centrist area or it could also point to people of her religion).

She also supposedly said that the poor people were experiencing a lot of monetary and physical loss with even some of their shops being burnt down.

She consistently kept asking Doval to intervene in this matter and take stern action, to this Doval replied “I give you my word,” thereby assuring her that he will surely get the place back in order.

Have to give kudos to her bravery though, in actually stepping up and letting the NSA know what the exact situation was at that place. She did not get scared by his position or the many cameras that were surrounding all around, instead she was determined to have her voice heard by one of the few actually important people that were visiting there.

Why Was Ajit Doval There?

Considering how bad the situation in north-east Delhi was getting, and the inability of the police and other authorities in containing the violence, this was the obvious next step.

He reached Jaffrabad and then walked around the Seelampur and Maujpur area, asking people to try for communal harmony and peace. He told to reporters that, “Insha Allah (God willing), peace will prevail.”

Doval was also bent on assuring people that the police were doing their job and that citizens would not be harmed in any way.

According to him, these riots was just the work of a few anti-social elements who wanted to create disruption and chaos in the country. He told said that, “People have a sense of unity among them, there is no enmity. A few criminals do things like this (spread violence), people are trying to isolate them. The police are here and doing their work. We are here as per the orders of the home minister and the Prime Minister.”

However, it is hard to take comfort from his words after seeing how bad the situation still is and the fear among many people about their very safety.