The recently concluded 63rd annual Grammy Awards were talked about quite a lot. But one of the biggest things it came under fire for was the obvious exclusion of POC (people of colour) and other non-White or non-Western artists from some of the biggest awards.

The K-pop band BTS, short for Bangtan Sonyeondan or Beyond the Scene sadly did not win a Grammy for the Best Pop Duo/Group Performance category that they had been nominated in.

This brought on major accusations from fans and even other artists on the seven-membered group consisting of Jin, Suga J-Hope, RM, Jimin, V, Jungkook, were robbed of the award even though their numbers and charts were much higher compared to the rest of the nominees.

The whole issue also started the conversation around major Western awards being limited only to Western artists especially in the major categories, with non-Western artists being most used for the views and tag of being an ‘inclusive’ award show.

Soon after this, however, Topps a trading card company unveiled their Garbage Pail Kids collection inspired by the Grammy award held on March 14th, 2021. And one of these cards featured BTS, but in a way that was appreciated by the fans.

What Is The Issue With The Cards?

The Garbage Pail Kids are sticker trading cards that were released all the way back in 1985 as a parody to the then extremely popular Cabbage Patch Kids dolls.

But instead of being cute and nice to look at, the illustrations on these trading cards featured grotesque creatures who often would have deformed features, some abnormality along with a wordplay with the character name and an adjective.

They are often said to be satirical in nature and making fun of mainstream things and events.

One of them was even BTS, who were given the tag of ‘BTS Bruiser’, however, fans took offence to the caricature it showed. 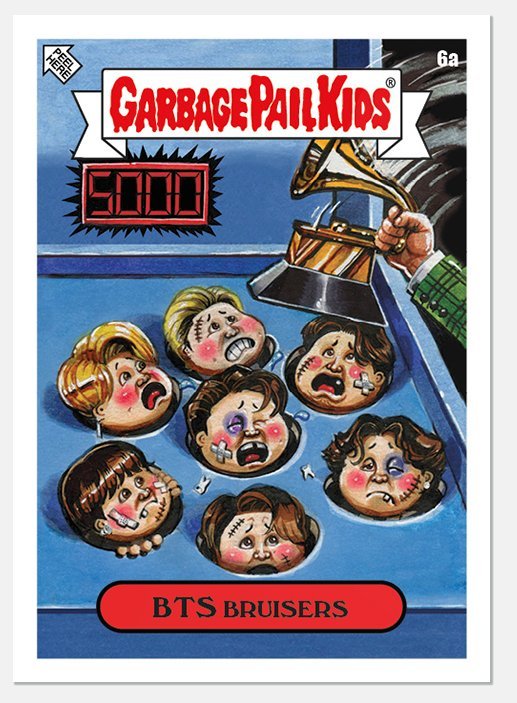 It showed the BTS members severely bruised and injured with a hand holding a Grammy award playing a violent game of Whack-a-mole.

Instantly, several BTS fans or ARMYs as they are called bashed the extremely violent nature of the artwork.

Some even commented on how the excuse of it being satire didn’t fully work since BTS were one of the few that were shown all beaten up and in such a bad way, while several other artists were drawn in a cute or funny way.

Phrases like “Stop the RACISM and VIOLENCE” “Racism Is Not Comedy” along with #StopAsianHate and #AsiansAreHuman started to trend.

.@Topps Can you explain why you chose to illustrate BTS in this way? The other artists you’ve included have no depiction of violence in their illustrations. Why did this get green-lit? https://t.co/BAVYlvOpKO pic.twitter.com/I4tukzTofg

You somehow thought 7 Asian men being beaten by a trophy when there is such surge in hate crimes against Asian people was a “funny” exaggeration to create a comic effect ? Lets talk. #RacismIsNotComedy pic.twitter.com/vfQcg1CbV7

Let’s talk about how @billboard edited their article to delete the mention of BTS without acknowledging why it was completely inappropriate to depict an Asian group getting “smashed by a gilded gramophone” in light of all the hate crimes against Asians or giving an apology. pic.twitter.com/9Mr8RnCfEq

Several users on Twitter also started to post informative links and images as to what the current sentiments towards Asians really is.

There has been a horrifying increase in Asian hate crimes and racism and discrimination against Asians, especially in the last year. Most of this is attributed to the origins of the coronavirus pandemic being China.

People thus took their prejudice and stereotypes to the next level, verbally and physically attacking any person that looks even the least bit Asian. Asian harassment is becoming extremely common these days where people believe that any and all Asians are the cause behind the global pandemic.

please take a moment to educate yourself with what’s currently happening. pls use your platform to spread awareness! https://t.co/BVB7oOu3NL

Please take some time to educate yourself on the current anti-Asian violence happening.

Stop normalizing the hate and discrimination against Asians. Donate if you can towards official organisations to #StopAsianHate! https://t.co/NJB5lUYuey

Users also believe that this goes beyond just being about BTS and is about racism and xenophobia against them simply because they are Asians.

In Pics: Grammy Awards Are Being Called ‘Scammys’ After These Artists Were Robbed