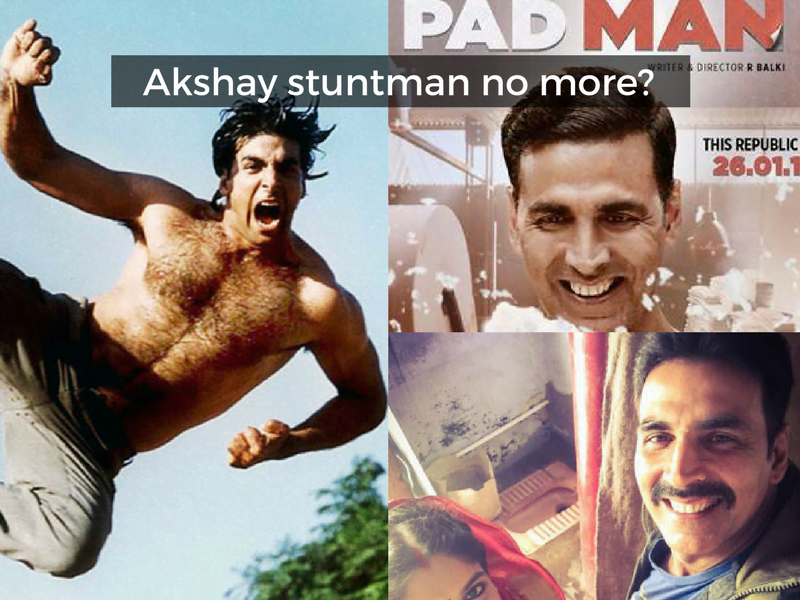 With his upcoming movie Padman and back to back superhits in the recent past like Holiday, Rustom, Airlift, Singh Is King etc., he has completely transformed his image in the industry.

Akshay Kumar started his career with a lead role in the movie Saugandh in 1991. However, his career didn’t shoot up from there. He was identified as an action lead once he got Abbas Mastan directed movie ‘Khiladi’.

He focused on action from thereon, with a few romantic roles here and there. Although, all through the decade he was only seen as an action lead and continued to get roles in ‘Khiladi series’, one after other.

During the 90s, Akshay himself started enjoying the ‘Khiladi stuntman’ tag which only added to his ‘B grade action actor with a few lucky hits’ image.

Later, it is only after his marriage with Twinkle Khanna that his career shot up. The actor himself candidly jokes around that his wife has been a lucky charm for his career.

He started doing comedy roles in the late 90s. Hera Pheri was a super-hit and successfully established Akshay as a fine comic man. With hits like Namaste London, Bhoolbhulaiya and Singh Is King, he proved his mettle in the genre.

Now, since almost 3-4 years or so, the actor is trying to give himself a different image altogether and has been trying to experiment with different roles and genres.

For instance, he did quite a few defence characters to portray himself as that perfect uniform guy. And oh, all of them were hits. Be it Holiday, Airlift or Rustom. In fact, all of these were commercial hits and Akshay even bagged a National Award for his ‘navy guy’ role in Rustom.

Also, read: Lack Of Ideas Under The Garb Of Creative Liberty: What’s With You Bollywood?

The most recent Akshay movies are social issues based, movies like Toilet: Ek Prem Katha and now, Padman. His PR team is working hard to have this image change and well, we ain’t complaining.

Toilet: Ek Prem Katha, a story based on the importance of sanitation, wasn’t really a commercial superhit but it did leave a mark on the audience. The message was loud and clear and the comic element was just a cherry on the top.

Trailer of Padman is out as well. It is based on a true story of a rural man who invented pads and highlighted women sanitation issue and possible solution. The trailer is quite impressive. The movie is soon gonna hit the trailers and the hype about Akshay’s role and acting is already with people.

Even if the movie doesn’t do very well at the box office, one thing that is for sure is that it has successfully given Akshay an image change and that he has proven his versatility when it comes to acting!

A chef turned action actor to romantic roles with a comic timing to a desh bhakt and now, that next door common man with an urge to change the world. Akshay checks them all! Quite a career graph, I must say. You go, Akshay!