Home Technology After Being The Kingpin Of Drugs, Escobar Family Aims To Beat Apple... 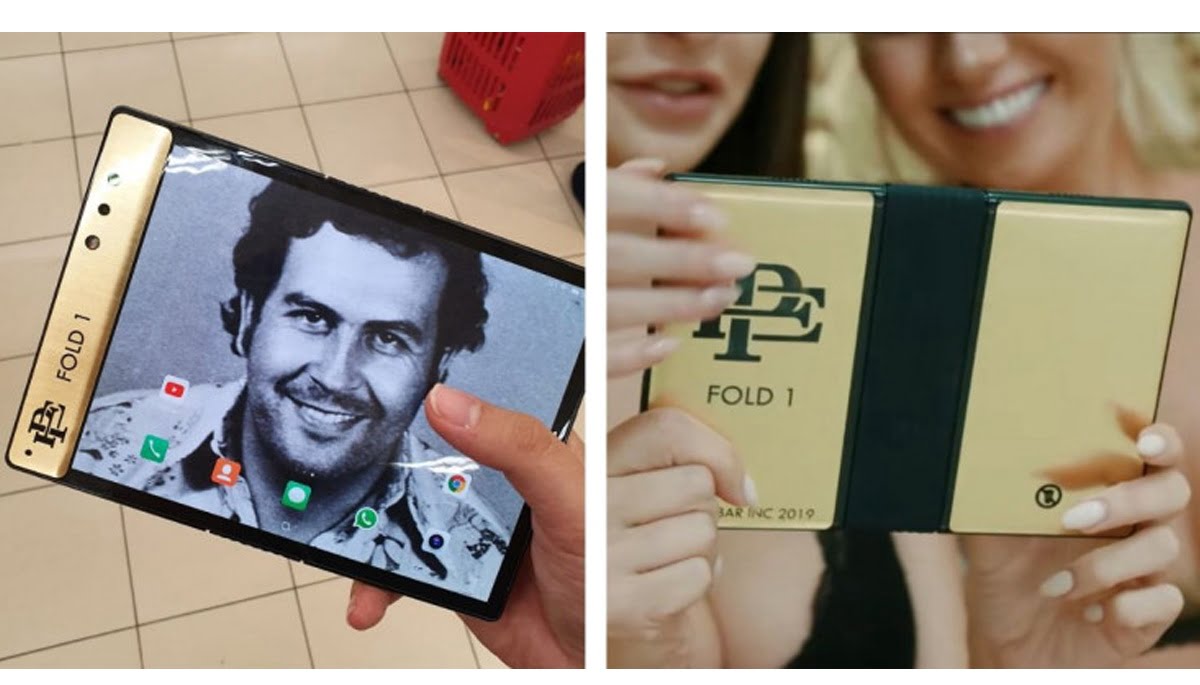 In the 20th century, a parcel from Escobar would have scared the bejesus out of you while in the 21st, it’s supposed to have a happier ending, as the Escobar family launches an unbreakable foldable phone- Escobar Fold 1.

The phone’s website and the promotional videos are all about lingerie-clad women showing off the device, which reveals that it has a 7.8-inch AMOLED FHD Plus screen that folds out into a tablet. It also runs Android 9.0 (Pie) powered by a Qualcomm Snapdragon 8 Series chipset and has dual 16 and 20-megapixel cameras. The $350 phone features 128GBs of storage, and there’s a $500 version with 512GB.

“Imagine a reality, where you can ease fold your phone into a tablet’’, reads Escobar Inc.’s website.

Dealing with the competition, Escobar way

The phone claims to be far better than the big guns (Geddit?) of the smartphone market like Apple and Samsung and its claimed features do have the potential to be so.

As he goes from cell to cellular, Roberto Escobar’s phone- The Escobar Fold 1 is set to go toe to toe with $1,980 Samsung Galaxy Fold, $1,500 Motorola Razr and $2,400 Huawei Mate X as it comes at a lot cheaper price of $350. With Apple introducing the ‘revolutionary technology’ of dual sim in its iPhone last year, it is pretty safe to say Apple won’t be able to release a foldable phone before 2021.

ALSO READ: OnePlus Beats Apple And Samsung To Become The Most Preferred Smartphone Brand In India

“I have told many people that I would beat Apple, and I will,” Roberto said. “I cut [out] the networks and retailers to sell to customers phones that can fold for only $349, phones which in stores cost thousands of dollars by Samsung and others.”

Although an ad on the Escobar Inc website suggests that late Apple founder Steve Jobs could have only dreamed of such sophisticated phone as such, it is a still tad bit unclear what the lingerie-clad women had to do with it.

I mean, sure, a 1-minute promo video explaining the specs of a brand new phone can get monotonous. But a naked white woman with nothing but a thin yellow tape to cover her upper torso as she explains the specs feels a bit too much.

Oh, don’t get me started on the wallpaper of the phone as the lady plays around with it– the infamous mugshot of a grinning Pablo Escobar.

Another video on the website has the narrator stating-

“Apple Boy Steve once looked into space. He saw Pablo Escobar with a phone beyond anybody’s imagination,”

It is still unclear from where Roberto, the one time accountant for the Medellin Cartel and Pablo Escobar’s older brother, got the money to develop such a phone as he had spent more than a decade in jail as his property got confiscated. Though it is a decent phone, it seems that he heavily relies on pretty ladies and his brother’s face to make a successful sale.

“I have told many people that I would beat Apple, and I will.” , said Roberto in an Interview

Earlier this year, Roberto went against Elon Musk over a Musk company’s product – a toy flamethrower. Roberto said that the tech genius had ripped off his idea which he got from the way he and his brother would sometimes burn piles of cash to keep warm. Musk, on the other hand, says he got it from the movie “Spaceballs.’’

Hoping that the $349 foldable phone doesn’t add another season to the Netflix TV series –Narcos, what’s your opinion? Want an Escobar phone with the kingpin’s smiling face staring straight at you?

Reviews Brand Voice - September 22, 2021
September 22: Netizens in India and abroad are celebrating because their favorite social media star has bagged a role in a web series. He...