Bollywood turned global superstar, Priyanka Chopra seems to have developed an affinity towards another new endeavor and this time too, it is as unconventional and innovative as it gets.

On Thursday, the actress took to Twitter to announce her entry into the tech investment market with two start-ups, Holberton School, a coding education company and Bumble, a dating and social media app. 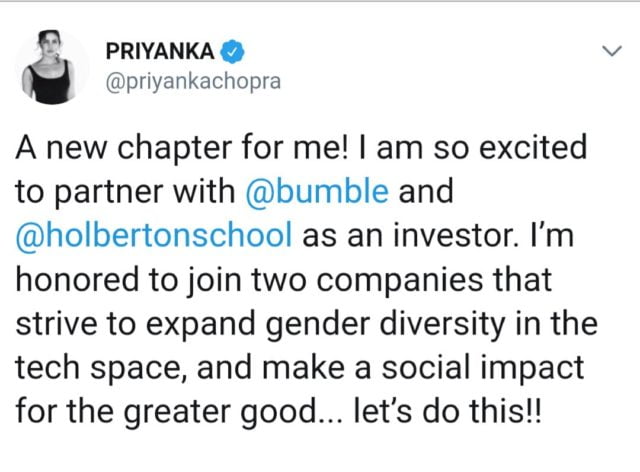 What makes these start-ups different from others?

Holberton School offers a two-year higher-education program in software engineering but seeks to challenge the traditional mode of teaching in most institutes by replacing it with a ‘project-based’ and ‘peer learning’ program.

Rather than delivering lectures in compact classrooms and having students cram theory that they hardly ever use in real-life, the school gives its pupils a series of complex programming challenges and such other tasks to execute so that their practical knowledge of the subject is enhanced.

Also, their curriculum is based on a ‘no-tuition-fee’ policy as they charge absolutely nothing from their students during their admittance but demand about 17% of a student’s paycheck for three and a half years after they get placed in reputed companies.

In case a student doesn’t land up a good placement, they let him/her go for free. Due to this unique feature, it attracts students in abundance from all around the globe.

The actress recently had a tour of the school in San Francisco and on being asked about her investment in this one-of-its-kind venture, she very proudly replied,

“You just hang out and you’re learning. It’s amazing.”

The second company in which Priyanka has invested is Bumble, a dating and social media app. It was founded by Whitney Wolfe Herd in 2011, shortly after she left Tinder which she also co-founded.

Bumble distinguishes itself from its rivals by being recognized as a feminist dating app since, for heterosexual matches, it requires the female users to first contact its male users. 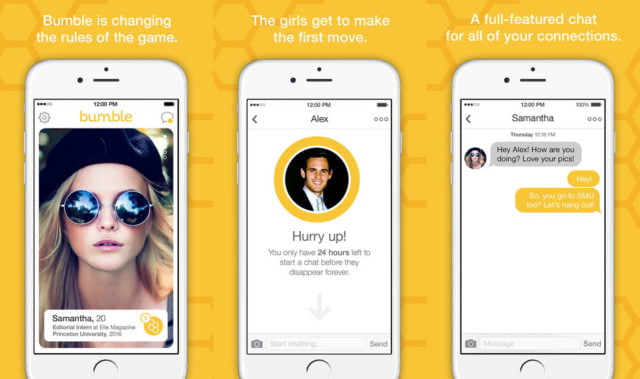 The actress would also promote its launch in India in the coming months as reported by the New York Times. Her manager, Anjula Acharia, is also an advisor to Bumble and was the person who first introduced Priyanka to tech investing.

Priyanka also declared on Twitter that her inspiration to invest in a tech start-up came from Hollywood actor Ashton Kutcher who has co-founded ‘A-Grade Investments’, a venture capital firm that invests in technology start-up companies.

Investments with a social cause

Priyanka’s philanthropic work regarding various social issues such as gender-inequality, female infanticide, women’s rights and feminism cannot be undermined by anyone and this time too, she’s proved herself as a true humanitarian.

Having served as the national UNICEF Goodwill Ambassador for Child Rights in 2006, it seems Priyanka has not forgotten the oath she took on her appointment as today also, she continues to work with the same motive in mind.

Regarding her investment in Holberton, she would be extending her unflinching support in the school’s mission to educate people from underprivileged backgrounds and would soon be joining the company’s board of advisors.

Also through this new venture, Priyanka aims to fight gender disparity prevailing in the tech industry, as evident by the following statement she made in the press,

“I don’t want to just be one of those people who’s like, ‘Yeah, I want to be on the tech bandwagon — how are they making so much money?’ It’s not about that.’’

The actress plans to target her investments in companies founded by women (such as Bumble) and those that reverently support a social cause. She says, “I’ve always believed that investing in women is the key to social transformation and economic growth.”

In the last few years, Priyanka has left absolutely no stone unturned to make us Indians feel proud of her.

From making a stellar debut in Quantico to being the first Indian actress to win a People’s Choice award, she has truly emerged as the modern day self-made woman and continues to inspire us millennials, even more, every day.

Here’s hoping PeeCee will be able to give this new venture an even newer dimension, and that she may be as successful in this arena as she’s rightfully proven herself to be in all other spheres of life.