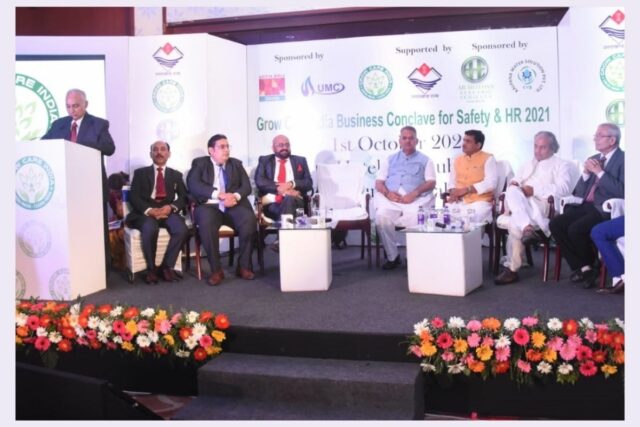 October 07: AB MOTOSS Electric Vehicles, who won the Gold Sector manufacturing award in the Grow Care India Awards, an event organized by Grow Care India and held in Dehradun on 01-10-2021 at the Madhuban hotel, which turned out to be a super star-studded affair.

The honored guests who were from India’s Top business conglomerates like Aditya Birla Group, Kalpana Water Solutions, Indian Oil and many more were addressed by Shri Vinay Kumar Ruhela, who spoke about how The State Of Uttarakhand has been a centre for Natural Disasters in India and highlighted the recent Disasters in the state like the Forest Fires, The floods and various others that the state has gone through in the near past. He then went further to inform the delegates on how the Current Government of Uttarakhand has built new tunnels, Airports and Helicopter services to make the movement of people and products faster and easier so the people can easily access relief as well as evacuation efforts.

Shri Ganesh Joshi also addressed the delegates and informed them how tourism is a significant drive towards the state’s revenue and how the current government has reduced the Airport taxes so that travel to the state becomes easy and affordable, and more tourists are attracted to the beauty of the State.

The awards that were centred around Safety in the workplace, which was in line with how the corporates should create safety measures for their employees in the wake of all the Natural Disasters that may take place, Awards were won in many categories by companies like ONGC, Aditya Birla, NTPC and Godrej.

There was also a short musical performance by Bollywood Actress and singer Kaajal Vashisht who thrilled the audiences with tracks like Ranjha from the movie Shershah and Tujhe Kitne chahne lage hum from the movie Kabir Singh.

The audiences were also treated to display the latest models of Electric Vehicles by AB Motoss EV, with models like the Rays EV, Rapid EV, Vaayu EV, Pride EV – a special three wheeled EV for the specially-abled and a commercial EV called the Laama EV.

On viewing the display of the innovative models, the Honourable Minister Shri Ganesh Joshi stressed the importance of a pollution-free India and the need for companies like AB Motoss EV to set up factories in the state.

Shri Sumit Gautam the CEO gave a small video presentation on the quality and types of vehicles the company is launching in India in the next two months; also on stage with him was Shri Deep Khosla, the COO of the company.

The entire event was a musical and visual extravaganza that was both enjoyable and highly informative. The evening culminated with a scrumptious dinner and photographs, which almost all the guests took with them as a sign of a truly memorable evening.

Information on AB Motoss Electric Vehicles and their entire range can be seen on their website, https://abev.in/Home.html

Ready To Travel Again? Know These 23 Visa Free Countries For Indians You Can...

Reviews Brand Voice - October 26, 2021
The very first thought that comes to mind when planning an international journey is applying for a visa. We spend hours on the internet...