I never thought I would see men protest #MeToo in Delhi, but I was proved very, very wrong today.

According to this story posted on Instagram, roughly 200 men were seen protesting the #MeToo movement. In the story, they can be seen carrying an effigy which has been pierced by multiple arrows. 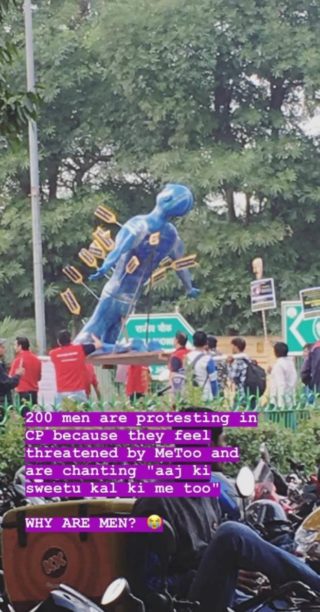 Related: Jamia Milia Islamia Reacts To The #MeToo Movement In A Weird Way

This kind of protest would be surprising on any other day, but it happening on International Men’s Day is troubling, to say the least.

The same kind of misconception about feminism that leads to useless debates on social media and news media channels about the same is powering the protest that took place.

Men misconstrue a movement that aims to emancipate and protect women as something which is essentially anti-men and a threat to their very existence.

Men assume that women have this ulterior motive to establish a women-only world where men cannot have either a voice or a life and where they can not do what they want.

Well, that’s just stupid. Wake up, men. If you don’t harass/molest/rape women, you have nothing to worry about.