The MeToo movement in India is such that practically every public personality is being asked to comment on it. And the latest person to give their 2 bits on the movement would be Preity Zinta who is recently promoting for her upcoming film Bhaiaji Superhit.

A clip from her interview with Bollywood Hungama has gone viral where she is seen commenting on the MeToo movement in India, its impact and more.

The responses she has given to those questions are extremely strange and bordering on insensitive. Here we take a look at what all she said:

Interviewer: So how’d you look at this entire MeToo movement that is taking place?

Preity Zinta: “I think it’s important that this whole #MeToo movement has started but it’s also important that women use it for the right thing because there are men and women that would use their position of power for their advantage.

But, I do feel bad when women are using it when it’s not that serious or for personal vendetta or for publicity.

There is a very small percentage of women that are using it and they’re diluting the movement but then there are also women who’ve gone through all of this and we being in the industry have heard so many stories.“

Is she for real?

Why are you talking about the bogus claims knowing the severity of the #MeToo movement and how bad it has been for some people?

I won’t deny that there haven’t been false alarms, but why put all the attention on the ‘small percentage of women’ and moreover, going back on your previous statement:

In October, to Quint, you stated that,

So now suddenly women are doing it for the publicity or revenge?

In continuation with that same question, she also said that,

Preity Zinta: But, this ‘Me Too’ movement if it’s this much (indicates small) in the film industry, it’s that much  (gestures big) in every other industry.

Atleast we have a spotlight here in this industry and people listen to you and the media is there but if you’re telling me it’s not in other industries and not in the business world and not in politics, that’s rubbish.“

First of all, the MeToo movement in India didn’t technically start from Tanushree Dutta, it was in fact from the education sector.

Last year in November, Raya Sarkar published a list on Facebook with about 50 names of Indian professors and academians accusing them of sexual harassment.

That one, while having its own issues, was one of the first MeToo incidents in India where Sarkar also urged other students to share their experiences of “academics who have sexually harassed or were sexually predatory.”

Also if you want to count politics we had the highly publicised M.J. Akbar case, then the BCCI CEO Rahul Johri sexual harassment accusation in sports, the Tata Motors case in the corporate sector and the many many other stories and reports that came out of the journalism world.

So I don’t understand how you can believe that it’s only your poor, abala, bechari Bollywood industry that is being targeted here, when in fact the #MeToo movement is not industry specific.

What point were you trying to make in any case?

FYI: Education, politics, entertainment, journalism, sports, corporate: all are dealing with their own #MeToo movement, it’s just that the media decides not to report them extensively since they cannot exactly sensationalise it like they can with Bollywood news. 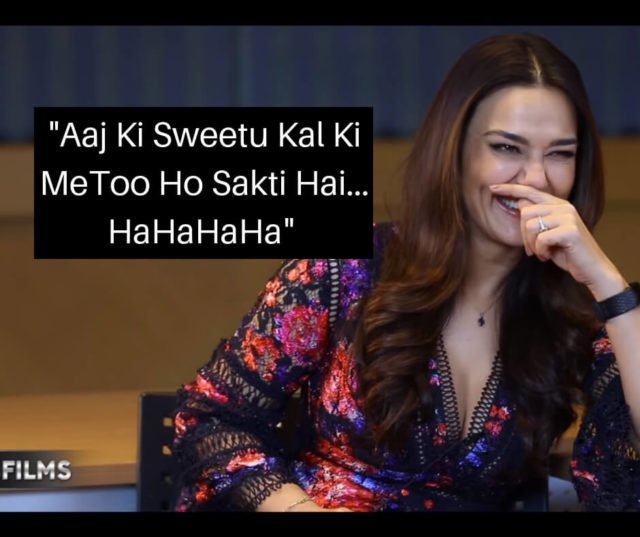 Interviewer: Personally, have you ever had any experience …sort of…has anyone tried their…sort of…luck with you? And how did you personally deal with it?

What… the f**k?? Are you serious right now? Did you actually say that you wish for sexual harassment?

You then tried to explain this reaction by saying that just so you could have answered the question… I mean… what???

Even then, you want to have had experienced sexual harassment or something worse just so you could give an answer? What kind of logic is that?

It’s pretty safe to generalise that almost every woman in India has faced sexual advancements atleast once in their lifetime…and so you don’t need to experience a #Metoo moment to reply to the dumb interviewer’s question properly.

Zinta has a few hours back tweeted about how the answer was taken out of context due to bad editing.

I’m really suprised & upset that journalists like @iFaridoon take an interview & edit it to sound controversial for better traction. If I said “I wish someone had bothered me” – it meant I would have probable beaten them up if they had… Interviews taken out of context #Metoo

Really sad 2see how the interview Is edited to trivialis& be insensitive. Not everything is traction & as someone being interviewed I expected decency & maturity froma journalist @iFaridoon. I did 25 interviews that day & only yours turned out edited like this #dissappointed

The Dumb AF Interviewer Giving His Own Pearls Of Wisdom

When Zinta said that, …this is very relevant question because people treat you the way you want to be treated.“

Perfectly letting us know that all this time we have been looking at the #MeToo movement completely wrong.

“Exactly, it’s also about the way you project, you know.

Because many a times there are a lot of people who are saying that you know, having … giving all the indications and all the stuff and after that just turning back because you did not get the role and coming up with stories… that is something which is happening as well which is I think a bit… which makes it a bit dubious actually…”

Wow… this means we have been looking at the whole movement incorrectly… the oppressed and wronged people here are all the accused who did absolutely nothing wrong and are just hapless victims to the devious accusers who are being petty after not getting a role. They definitely did not submit into the demands of the casting couch to be able to get employment.

And then the next part Zinta just rambled about how children need to be taught about this, and how her living in America has given her this enlightenment.

And while her point of gender sensitisation is not wrong, but then her comments did not make a lick of sense.

“The film industry is one of the most safest places, there’s some of the most decent people I worked with. So I feel really bad when people say this industry is really and yes if they are dodgy people well there’re bad people everywhere.”

What do I even do with these comments of her? How can she state that the Bollywood industry is one of the most safest places when so many accusations and stories of sexual harassment, assault and more have come out?

And nothing you can do to change the world? Ma’am let me tell you that this movement is changing the world and the professional industries in some major ways. Powerful people are finally realising that their position and fame will not be a ‘safe from jail’ (a Monopoly reference) card for them and that they will have to bear the consequences of their actions.

(Read this: Powerful Men Whose Careers Are Destroyed By #MeToo Disclosures)

And this was a gem from her interview video:

So don’t hang out with any Sweetu.”

Sigh. I can’t even… is she drunk? Or high? What kind of drugs is she taking?

This entire interview was so crass and badly answered to almost everyone, the victims of sexual harassment in Bollywood, the people who are working to bring justice to them and to the entire #MeToo movement in India itself.