Prime Minister Narendra Modi is a man who has a hagiographic biopic, a radio show, the highest number of social media followers in the country, two landslide electoral victories and most importantly, the largest number of ‘bhakts’.

He recently secured the distinction of being photographed from all possible angles while meditating in the holy cave near Kedarnath.

This was the only thing that was more incredible than the hugs he gave his foreign counterparts during his visits to other nations. Needless to say, both acts were hyped by the media.

If his government had not banned Tik Tok, he would’ve probably created a video of his own which would’ve broken the Internet. Alas.

Having said that, there was one medium that he wasn’t actively part of- television. Actually, on second thought, scripted interviews with Arnab Goswami can be counted as TV shows.

However, until now, he didn’t officially participate in a television show because he doesn’t like too much publicity. Duh!

Then, he was offered to feature in an episode of Discovery Channel’s popular show called Man vs Wild with host Bear Grylls.

What happened next led to Twitterati react like only they can. 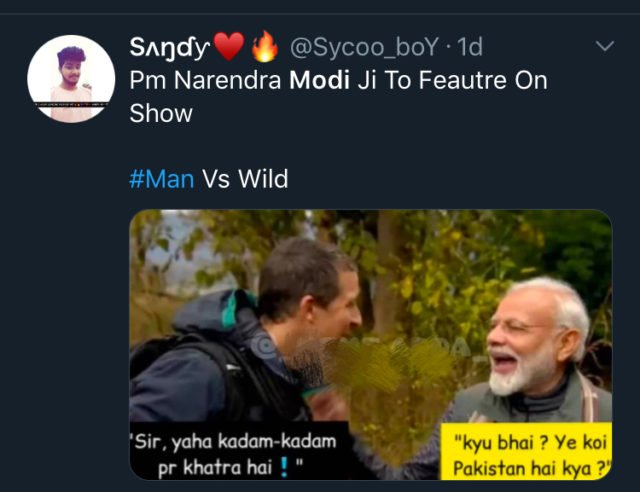 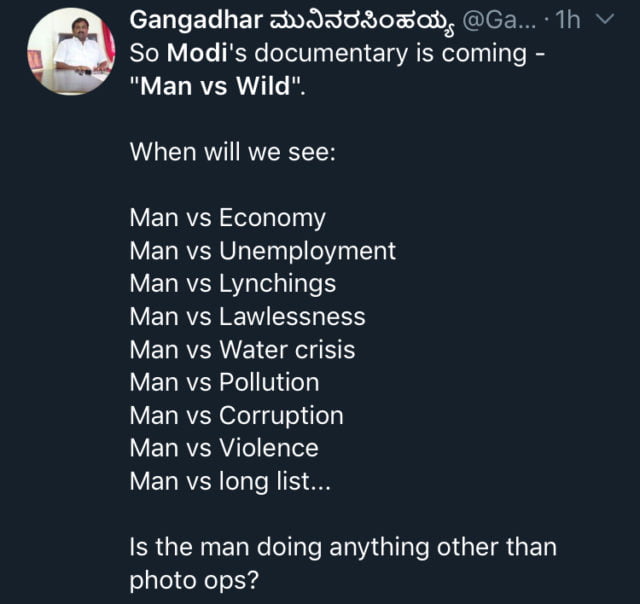 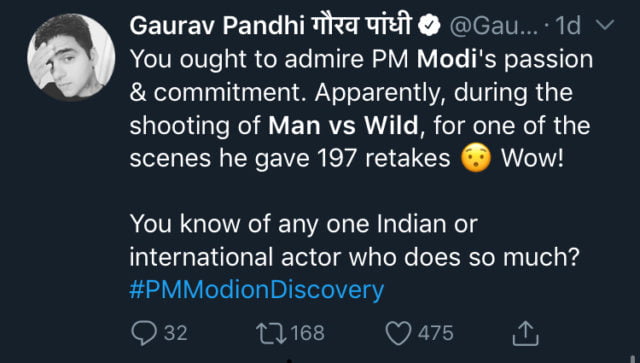 Why He Came On-board For Man vs Wild

Man Vs Wild is a show about Bear Grylls and his crew navigating through remote forests and islands while tackling challenges and giving survival strategies to the viewers.

The episode featuring Mr. Modi was shot at the Jim Corbett National Park in Uttarakhand. It is meant to shine light on wildlife conservation and address issues related to environmental change.

PM Modi said, “For me, this show presents a great opportunity to showcase to the world India’s rich environmental heritage and stress on the importance of environment conservation and living in harmony with nature. It was a great experience spending time in the jungle once again, this time with Bear, who is blessed with indefatigable energy and quest to experience nature at its purest.”

All This Reeks Of Symbolism And Gimmickry

What has the Modi government done to protect the environment so far? Let’s find out.

The Modi government took away the autonomy of the National Board for Wildlife (NBWL) in August 2014 by getting rid of 12 out of 15 independent members. Consequently, the process of granting environmental clearances got watered down.

According to the list of 10 most polluted cities in the world published by World Health Organization (WHO) this year, 7 are in India.

Open cast mining for coal will be done by Rajasthan Collieries Limited (RCL), a unit of Adani Enterprises Limited, after removing all the vegetation and soil from the area.

India’s position worsened on the Environmental Performance Index from 155 five years ago to 177 last year out of 180 countries.

PM Modi’s Man vs Wild episode won’t stop the ongoing assault on environment. Stringent measures on the ground and effective laws will.

Sadly, environment is the most underrated disaster of the Modi government and self-promotion is its most celebrated achievement.

Dear Opposition, Even PM Modi Thinks That You Are Valuable; Please Unite Now