Home ED Originals Demystifiers Why Is India Being Hostile Towards Justin Trudeau During His State Visit? 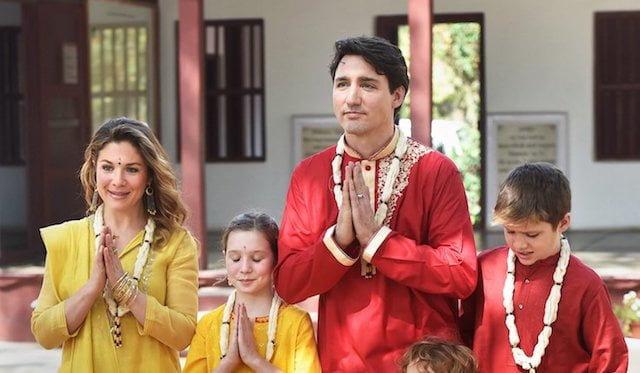 The much photogenic Canadian Prime Minister Justin Trudeau is on a state visit to India. He along with his wife, Sophie Gregoire Trudeau, and three children were received at the Palam air force station in New Delhi by Gajendra Singh Shekhawat, Minister of State for Agriculture, unlike the visit of other state heads who were personally received by Prime Minister Narendra Modi with a warm hug. The most recent example being Israeli President Netanyahu.

PM Modi, who is known for being hyperactive on social media, restrained from tweeting any welcome address to Trudeau. His Twitter account was silent on the subject.

Trudeau is on a 7-day state visit. So far, he has visited the magnificent Taj Mahal in Uttar Pradesh and the Akshardham temple and Gandhi Ashram in Ahmedabad. In both the states, he wasn’t received by the respective chief ministers of the state or by a cabinet minister or by the Prime Minister himself.

Former MEA spokesperson and present High Commissioner to Canada Vikas Swarup is seen to accompany Trudeau on his visits to various sites.

The way Canadian Prime Minister is being treated on Indian mainland raises the question:

Why is he being cold-shouldered?

After winning the 2015 elections, Trudeau inducted as many as 4 Sikh ministers in his cabinet out of the 17 Sikh members elected to the Parliament. Many of his ministers have been known to be Khalistani sympathizers. Present Punjab Chief Minister Capt. Amrinder Singh has on various occasions refused to interact with Canadian ministers owing to the growing Khalistani leanings in Canada.

Justin Trudeau is said to have visited events where pro-Khalistani persons were in attendance. Recently, he visited an event named Khalsa Day where Operation Bluestar militants were glorified and posters of Bhrindanwale were displayed.

In December 2017, as many as 14 Gurudwara management committees in Ontario passed a resolution to ban Indian diplomats and officials from entering the gurudwaras claiming they promoted anti-Sikh propaganda.

Almost a year ago, a retired senior CRPF officer was denied entry into the Vancouver airport because immigration authorities deemed him to have served a government that engages in “terrorism, systematic or gross human rights violations, or genocide”.

[Who are Khalinstanis? Khalistani movement is a cause to carve out a separate state for Sikhs exclusively. The secession movement took stronghold during the early 1980s leading to Operation Bluestar where Indian army barged into the Golden Temple in Amritsar and killed the mastermind Bhindranwale and other Sikh militants under Indira Gandhi’s regime. Post the military intervention, Indira Gandhi was assassinated by her Sikh guards and the deadly riot (read: genocide) of 1984 took place.]

Canadian Prime Minister’s growing veering towards Khalistani engagements made Outlook do a cover story named “Khalistan-II Made in Canada” in its latest issue. The cover page reveals it all:

What is more shocking is that Justin Trudeau is accompanying with him two Sikh ministers on the trip: Harjit Sajjan, who, as pointed earlier, is accused of being a Khalistani sympathizer, and Amarjeet Sohi, who was arrested in the late 1980s under the TADA (Terrorists and Disruptive Activities) Act.

Prime Minister Narendra Modi’s hostility towards Canadian state head can be deciphered as an attempt to express disappointment over Canada’s growing leanings towards Khalistani sympathizers. This isn’t just about few Canadians demanding a pro-Sikh and anti-India state. Members of the Trudeau government are allegedly part of it. Moreover, Trudeau visiting events organized in favour of such issue gives legitimacy to the cause, which India strongly objects to, and rightly so.

Every nation gives utmost importance to its sovereignty and integrity. The Khalistan cause hurts the country’s integrity and questions its sovereignty, which is why any attempt to legitimize the cause by the head of a foreign nation would be looked down upon.

The unruly treatment meted out to Justin Trudeau by the Indian government seems to be an extension of the same.

India’s relationship with Canada has always been a cordial one. In 2015, Narendra Modi and Stephen Harper, then Canadian Prime Minister, signed a $254 million deal where Canada agreed to provide 3,000 metric tonnes of uranium to India to power Indian atomic reactors.

Watch Why Has Maldives Declared A State Of Emergency?