Home Lifestyle What Happened When Elon Musk Asked For Dank Memes On His Twitter? 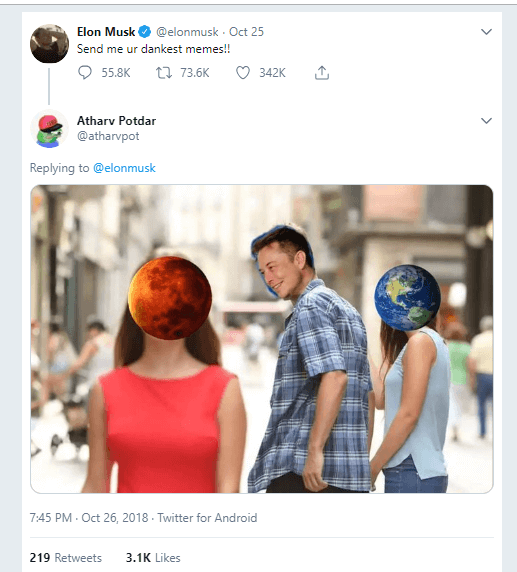 There truly is no one like Elon Musk, from smoking marijuana on video during a live radio show to saying some of the most insane things, the man is unique in a lot of ways.

Musk, the CEO of companies like SpaceX and Tesla with a net worth of almost $22.3 billion (Rs. 2230 crores), at the age of 47, is certainly behaving like an excited teenaged boy.

Elon Musk has talked a lot of things that seem really bizarre, like making a space colony, inhabiting planets apart from earth and more.

But his Twitter is another different place itself, which was further solidified when he asked his 23.5 million followers to send him their dankest memes.

Send me ur dankest memes!!

For those who are not aware, dank memes are usually made around topics that are extremely strange or been used to the point of them losing their funny side. These topics were most often online trends or jokes that everyone on the internet would be using as a response.

The word ‘dank’ here is actually used in a satirical way to mean ‘cool’, which can insinuate that the meme isn’t is as good as the person thinks it is.

Here are some of the responses that Musk got on his bizarre tweet:

i got u fam pic.twitter.com/6JJExCfuAe

Read More: You Could Soon Access The Internet Directly Through Your Brain Without Using Your Hands Thanks To Elon Musk

There were even some people who showed their concern for Musk and asked exactly what was happening.

He reminds me of my uncle who went to Burning Man and what’s worse, made us watch his videos of it

this is the man who's gonna save humanity from extinction https://t.co/MuBHoKTGGo

Even Elon Musk for that matter was a little disturbed by some of the memes that he got, bordering on being dark instead of ‘dank’, which became clear when he finally tweeted that:

I said dankest not darkest omg