Khaleej Times, the oldest English publication in the United Arab Emirates recently published an article titled: “Great Indian Weddings And The Politics of Child Marriages“, on the series of high profile celebrity weddings that have taken place in India lately.

With reference to the upcoming Isha Ambani wedding, the article said:

“Modi is likely to attend the Ambani-Piramal reception, the way that employees show up at the boss’s daughter’s wedding looking garishly downmarket and carrying a gift that will immediately find its way to the trashcan.

How can the prime minister of the world’s fastest-growing big economy not attend, when he has to face a parliamentary election six months from now?”

For a citizen of a country where even criticizing the Prime Minister is becoming a thing of the past, imagine my surprise when a publication outright called him an employee. 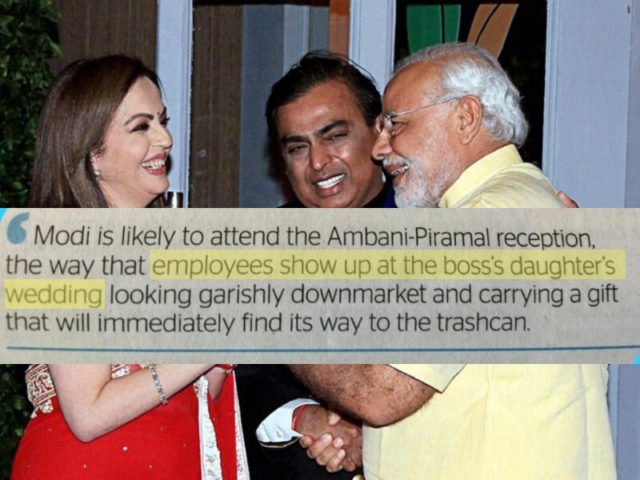 Related: Watch: Prashant Kishor- The Man Who Made Modi Win

The statement that really adds insult to injury is how it insinuates the disrespect that Ambani will supposedly show to the gift that Modi shall bring in the author’s scenario i.e. chucking it in the dustbin.

The main focus of the article is this report about a BJP candidate in Rajasthan promising no interference in child marriages if she is elected. It also talks about how India is obsessed with celebrity marriages.

While it is clear that this is meant to be a satire piece, I am not sure how the Indian public will receive it, especially considering the fact that this was written in a UAE paper and we Indians recently have become almost allergic to even a shred of a comment from anything apart from ‘desi’ publications.

The article is written by Aditya Sinha who according to his bio is a senior journalist based in India and author, most recently, of ‘The Spy Chronicles: Raw, ISI and the Illusion of Peace.’

Let us know what you think? Did it offend you? Did you find it funny? Fill the comments.

Watch: Questions All Of Us Would Love To Ask Our “Pradhansevak”, PM Modi