Show of hands, who here has stood in front of their mirror, holding any random house object and speaking out loud an impassioned award acceptance speech?

Award acceptance speech for that matter, are pretty standard, with people thanking their parents, friends, God, team and crew members etc. But just like any speech, no one really likes to listen to one person just droning on and on and in fact, Oscars or the Academy Awards even have a 45 second time limit to any speech.

However, at the same time many of these big award shows have a very strange habit of abruptly cutting off speeches by either calling for an advertisement or getting the music to start. The latest example of this was when it happened to the team of the South Korean film ‘Parasite’ when they received their Oscar for ‘Best Film’.

It is common for the entire cast and team of the movie winning the ‘Best Film’ to come up on the stage and give multiple speeches, usually be the director, producer, and one or two cast members.

However, this time the ending music came on and the lights were shut off after only the co-producer Kwak Sin-ae gave a 45-second speech. The camera had already swerved to presenter Jane Fonda to close the show.

What was really interesting though was to see how big actors like Tom Hanks, Charlize Theron, Margot Robbie and more started a chant of “Up, up, up!” and the Oscar producers turned on the lights and the mic once again.

After this co-producer Miky Lee gave her speech and the crowd cheered and clapped at this.

However, this is not the only time the Oscars or other big awards have abruptly and even rudely cut off artists’s speech, especially if they were going on some uncomfortable grounds. Here are some other instances:

Drake made headlines last year when his Grammy speech was abruptly and quite rudely, I believe, cut off while he was mid-speech.

Although Drake had not attended the Grammys since 2013, he did make an appearance to accept his award for “Best Rap Song” for his song “God’s Plan”.

He’s often spoken out against the Recording Academy and their inability to give recognition to POC (people of colour) artists and other genres besides pop.

He said that, “I want to take this opportunity while I’m up here to just talk to all the kids that are watching this, aspiring to do music… all my peers that make music from their heart that do things pure and tell the truth, I wanna let you know we’re playing in an opinion-based sport not a factual-based sport. So it’s not the NBA where at the end of the year you’re holding a trophy because you made the right decisions or won the games.”

He then added that, “This is a business where sometimes it’s up to a bunch of people who might not understand what a mixed race kid from Canada has to say or a fly Spanish girl from New York or anybody else, or a brother from Houston right there, my brother Travis [Scott]. But my point is you’ve already won if you have people singing your songs word for word, if you’re a hero in your hometown. Look, if there’s people who have regular jobs who are coming out in the rain, in the snow, spending their hard earned money to buy tickets to come to your shows, you don’t need this right here. I promise you, you already won. But…”

This is where his mic was turned off and the broadcast instantly went to on a commercial break. Although Grammy authorities state that they did not intentionally cut his speech or mean any disrespect to him, this still caught the ire of many people online.

Many people noted how the 2020 Golden Globe Awards cut short Joaquin Phoenix’s acceptance speech, when he won the award for Best Performance by an Actor in a Motion Picture (Drama) for Joker, short.

Phoenix in a impassioned speech commented on how the celebrities and people need to go beyond just giving a vote and need to take responsibility onto themselves. They in today’s time we all need to take on some inconvenience if it helps the environment and people around us. He called out his peers for taking private jets in today’s climate crisis by saying that, “We don’t have to take private jets to Palm Springs for the awards and back, please. I’ll try to do better and hope you will too.”

However, the wrap-up music started quickly at this and he had to end his speech. This also had a lot of people talking about it on social media.

Maureen O’Hara in one of her final appearances before her death created quite a stir. While receiving her honorary Oscar at the Motion Picture Academy’s 2014 Governors Awards from Clint Eastwood and Liam Neeson, she showed that she was still a fiery and strong personality even at the age of 94.

O’Hara came out in her wheelchair and after singing some notes to the song “Danny Boy” she brought out her acceptance speech written on a sheet of paper. But while many thought her speech ended with her saying, “I’ll leave you with this old Irish saying, ‘May the road rise to meet you, the wind be always at your back and may the sun shine warmly upon your face.’ Good night,” they were quite wrong.

After this, when she tried to continue her speech and the producers tried cut her off she fired back that, “Oh no, you have to give me a few more minutes.” 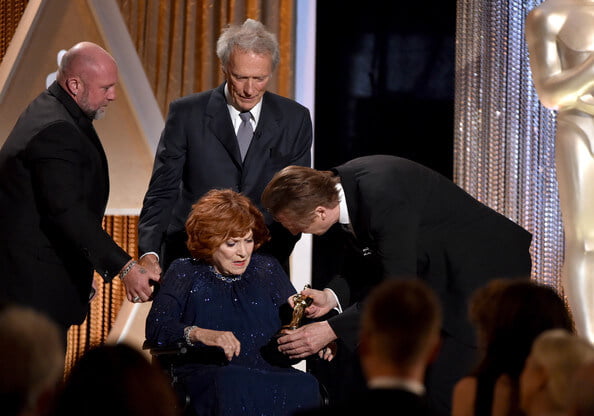 She reportedly wanted to speak about her life story and growing up in Ireland. However, her speech was cut off once more, this time with the microphone being removed from her dress and Eastwood wheeling her off the stage.

Some reports even state that O’Hara was extremely angry at this rude treatment and that she also kicked off one of her shoes while leaving the stage.

In 2008, Glen Hansard and Marketa Inglova, won the Best Original Song Oscar for the musical Once. While Hansard was able to give his acceptance speech, as soon as Inglova stepped up to speak, the mic was shut off and the orchestra playing her own song forced her to get off the stage.

However, the evening’s host, Jon Stewart, later on invited her to the stage and asked her to complete her own speech. Inglova gave a very sweet speech to independent artists by saying that, “This is such a big deal, not only for us but for all other independent musicians and artists who spend most of their time struggling.” She further said that, “The fact we’re able to hold this is just proof that no matter how out there your dreams are, it’s possible…This song was written from a perspective of hope, and hope at the end of the day connects us all no matter how different we are.”