Thugs Of Hindostan released the official trailer for the much-awaited film yesterday and already in about 24 hours, it has crossed 27 million views on YouTube (combined from the Hindi, Tamil and Telugu videos).

The views beat out Rajnikanth’s 2.0 trailer and certainly shows exactly how much buzz and excitement there is about this movie that brings together 2 of Bollywood’s biggest stars for the first time, Amitabh Bachchan and Aamir Khan.

Thugs Of Hindostan that also stars Fatima Sana Shaikh and Katrina Kaif in important roles, is allegedly based on the 1839 English novel ‘Confessions of a Thug’ by Philip Meadows Taylor about a fictional group of ‘thugs’ or gang led by a character called Ameer Ali and how they created problems for the British Empire in India between 1790 and 1805.

The story here changes a bit with Azaad (Amitabh Bachchan) playing the leader of the gang who wants to overthrow the British and how the East India Company use Firangi (Aamir Khan) to defeat him.

But while the story is certainly something, the concept and visuals of the movie have for long been in talks due to the uncanny resemblance with the Hollywood movie Pirates Of The Caribbean.

I noticed various other things about the trailer too:

One can certainly not deny that the trailer and the initial plot looks extremely similar to the popular Pirates of The Caribbean.

While Bachchan’s character seems a mix of Davy Jones and Barbossa while having a very noble cause at hand, appearing like a typical pirate kinda thug, Aamir Khan, on the other hand, seems to be a mix of various Johnny Depp characters.

While his characteristics greatly resemble Jack Sparrow’s, his appearance, on the other hand, looks a lot like Depp’s one from Alice In The Wonderland.

That same red and curly hair, that is flowing out from under his top hat, slightly eccentric British clothing are giving me major Mad Hatter vibes.

Apart from that, the Jack Sparrow persona is pretty similar, from being a fan of alcohol to being a no-good goon who is loyal to no one, but will eventually end up saving the day. 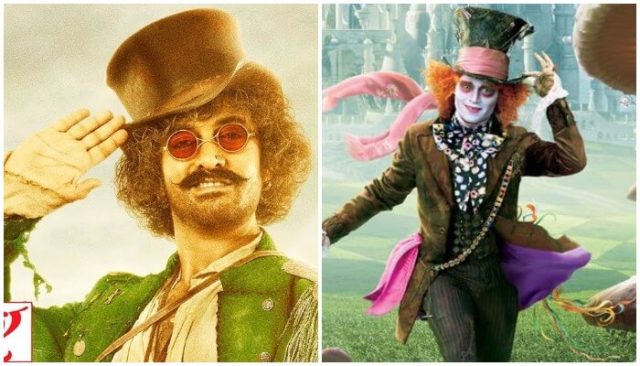 Oh, another film that obviously resembles Thugs in terms of plot could be Fast And The Furious 1 where Paul Walker’s character is an undercover cop who is told to infiltrate and eventually bring down a group of hijackers who use high-performance race cars.

Fatima’s character is that of a warrior whose second in rank in the army of Khudabaksh (Azad) and can wield a bow and arrow like nothing else.

When her character was introduced first, the similarity between the poster and that of Hunger Games, showing the lead Katniss (Jennifer Lawrence) was extremely obvious and noticed by many people.

But apart from that, it seems that Bollywood didn’t want to make it completely Hollywood inspired and so decided to take bits and pieces from one of the biggest Indian movies off late, Baahubali.

The using of 3 arrows by Fatima’s character in the trailer reminds me of Devasena too defeating enemies by shooting 3 arrows in an iconic scene. Then there is also some similarity to Avanthika (Tamannaah) in terms of her warrior costume. 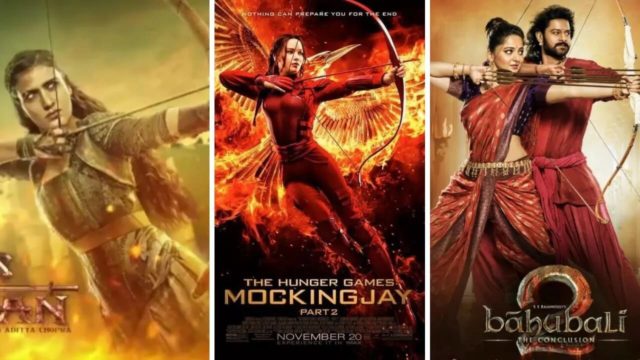 To be honest, the thing that irked me the most would be really bad background music for the trailer that sounded like any typical Celtic music you can find available free of cost on YouTube.

First of all, why are you using Celtic music in a movie about the British and Indians?

You cannot make invigorating and exciting Indian beats for the trailer? Or at the very least use certain British music that at least relates to the characters and overall plot of the movie.

Celtic is actually something more related to the Irish, Scottish and people from Wales, which is not exactly British in the right sense of manner.

Also, what exactly were the music team for the film doing, when they were just going to use something that was already available online for free. You search up war Celtic music and you can literally find tunes extremely similar or even the exact same one as used in the trailer.

Overall, it seems that the makers of this film just took a bunch of different films and compiled them all so that it would be not as obvious that they have copied and then just made it all into a very sad kind of khichdi.