Home Lifestyle This Brown Bear In Russia Is The Hottest Model In Town Right... 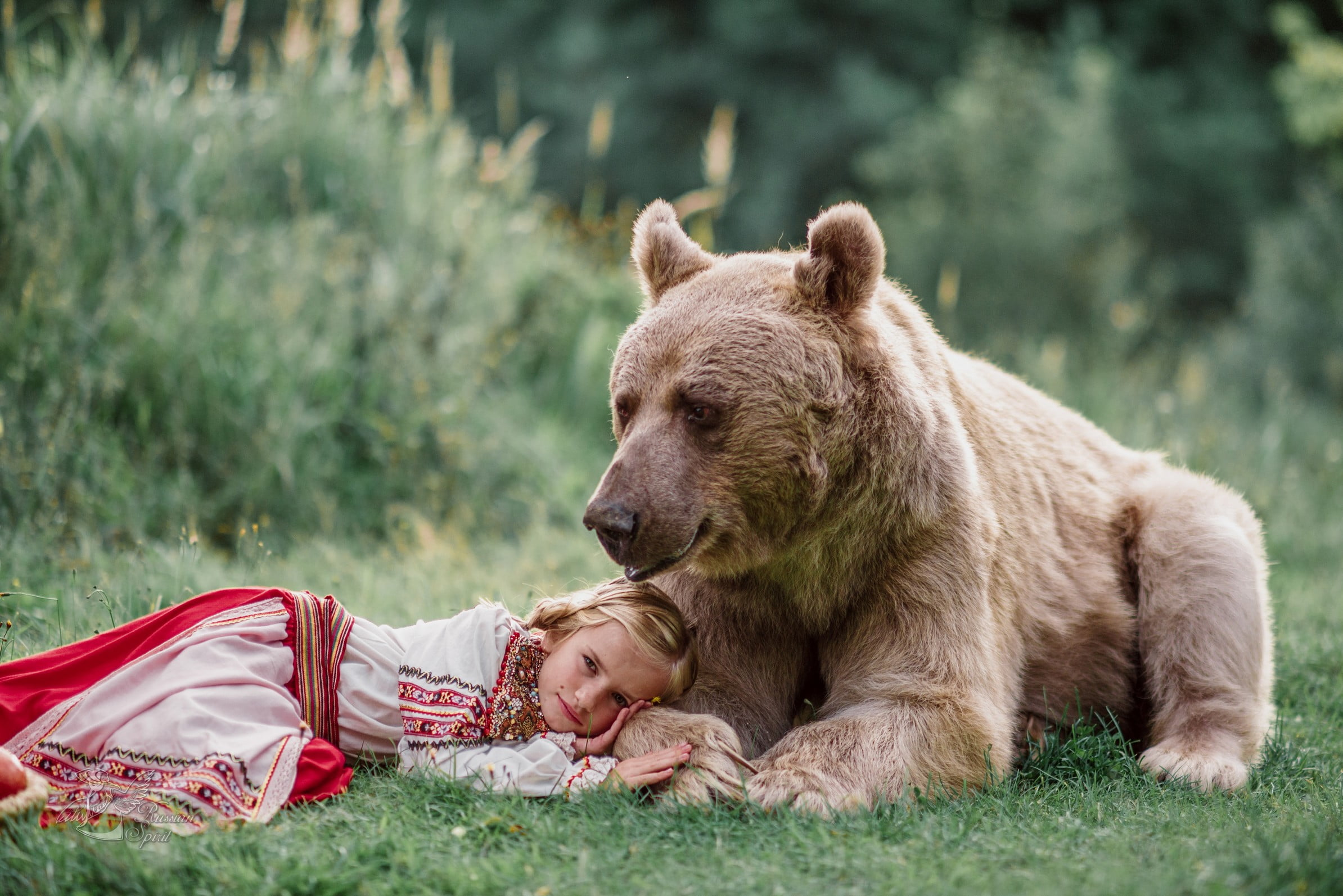 From the lens of our childhood, we have always found brown bears to be very amiable. Even our plushies collection had that one brown bear, and no matter how old or ragged it may have been, we loved it dearly.

However, the reality is very different from this fairy tale fantasy. Brown bears are one of the largest carnivores out there, and not to mention, quite dangerous too. They communicate through scratch marks in fights with their community and can weigh up to 1,500 lbs. 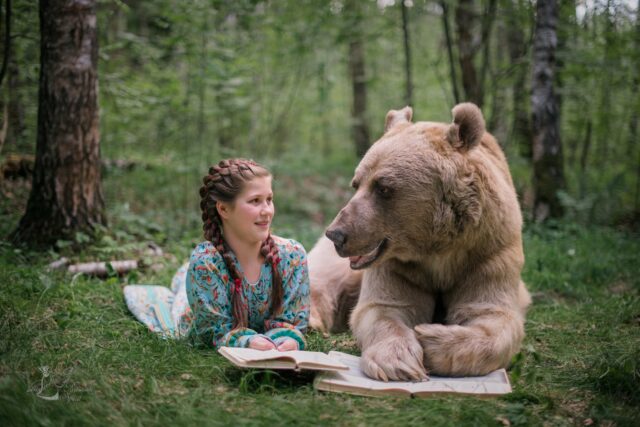 But what if we say that there might be a chance that the fantasy that we have always dreamed about these grizzly beasts might just be true? That’s right. Stepan, a 28-year-old Eurasian brown bear, abandoned by his mother at the mere age of 3 months, is the current fairytale dream come true of many and quite the (hot) celebrity of Russia.

Svetlana and Yuri Panteleenko are the Russian couple that has domesticated the grizzly brown bear. They said that they found Stepan in a very pitiable condition when he was abandoned by his mother.

The couple raised Stepan for most of his life, but now he lives in Losiny Ostrov Biological Reserve – one of the largest national wildlife reserves in Russia.

Read more: This Is How China Owns All The Giant Pandas In The World 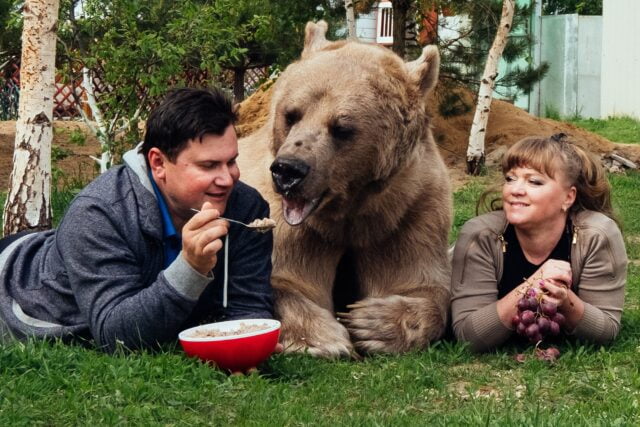 Stepan is very sociable and active. He eats about 25 kg of fruits, vegetables and eggs daily and loves to play football to keep himself fit (quite a health influencer). Not only that, but he also loves to keep himself busy and engaged.

Stepan has played many roles in films such as ‘Tsar’, ‘Edge,’ ‘Voronin’ etc. Recently, he has just wrapped up the shooting of his role in the TV Movie, ‘Fir Trees – 4’. 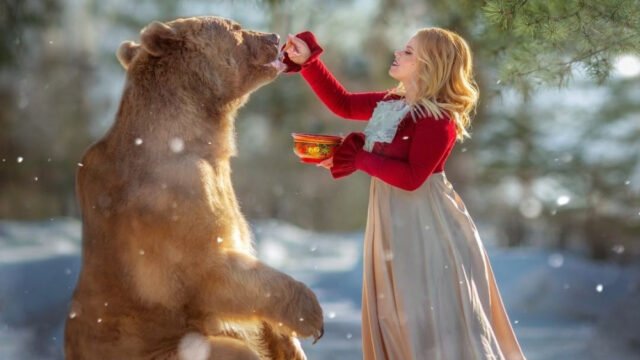 Stepan also enjoys photoshoots as part of his ‘professional’ life. And they have a fairytale quality about them, too.

History of bears in Russia

Many would agree to the fact that bears and Russia go hand in hand. That’s because Eurasian brown bears are the national symbol of Russia. And they were a mascot for the Russian 1980 Summer Olympics as well.

Not to mention, training and baiting of bears were banned in the country during the 18th century by Queen Elizabeth Petrovna. However, she kept two trained bear cubs for her entertainment.

Also, in Russia, bears are often compared with Russian women. They have been described as being ‘as moody as beautiful women’. In the context of their complex behaviour, they communicate through violence. They dislike the change of climate and season, want an abundance of berries (if possible) and are very dangerous if provoked.

There was also a theory that bears prefer menstruating women. This myth came into existence when two women were killed by two brown bears in Glacier National Park in Montana. One woman was having her period while the other had tampons on her. However, the theory was ruled out later.

It appears that only polar bears are attracted to the odour of menstrual blood, while black and brown bears are indifferent to it.

Once, a fan of our celebrity Stepan, commented on Svetlana and Yuri Panteleenko page, that if Stepan were a man, then he would have been the best husband and family person. This comment seems influenced by his gentle appearance in his photoshoots. 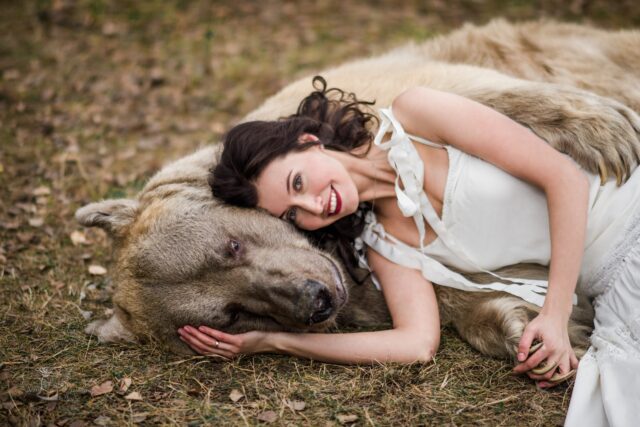 Many appreciate Stepan’s friendliness and tame behaviour. Some do object to it as well. According to animal rights activists, Stepan has continuously been exploited by the couple who adopted him and has been denied his freedom and natural instincts, which he would have enjoyed otherwise if he had been left to his own devices.

Quite a controversial argument, won’t you agree? Well, what do you think? Let us know your views in the comments below!