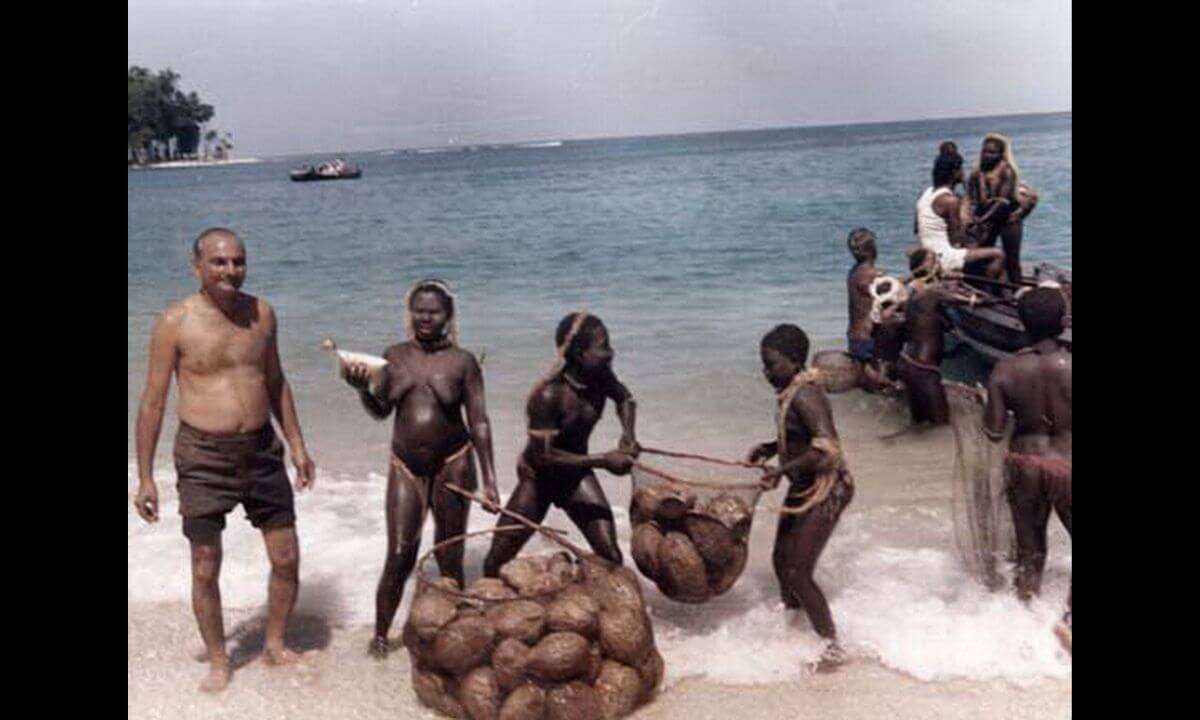 The lush green swathe of 23 square miles in North Sentinel Island, lying west of Labyrinth Islands in South Andaman is home to one of the remaining Stone-Age tribes who till date maintain their isolation.

Showing intense hostility by hurling poison darts or steel-tipped arrows from trees and beaches, the Sentinelese have turned down almost every friendly approach from the outside world.

Classified as Negritos, the Sentinelese exhibit physical characteristics akin to Africans with their dark complexion, tall stature, and peppercorn hair. With the population of North Sentinel Island standing from 50-250, the Sentinelese wear limited clothes made from leaves or fiber strings. [1]

Donning headbands worn out of vines, they are hunter-gatherers without any sign of agriculture. Fashioning dug-out canoes, bows, arrows, and spears from any metal or ships that have been wrecked on their treacherous rocky islands, they are not afraid to use them.

They use nets for fishing from the shore and haven’t displayed any ability to make fire.

You Can Also Read: This Ten-Year-Old Condom Ad Is What We Need To Break The Sanskaari Stereotypes

Believed To Be Direct Descendants Of Apes Becoming Man

There have been assumptions trailing the fact that the Sentinelese who remained isolated for 60,000 years are direct descendants of their pre-Neolithic ancestors.

The scientific study of their DNA samples by Anthropologists suggest that the Sentinelese were a part of an early wave of Hominoids (primates) evolving into Homo Sapiens who migrated from Africa to the Far East reaching Asia and other parts of the world.

Beaches that were exposed by low sea levels provided a new migratory route with oceans abounding in the reliable food supply. [2]

Failed Human Contacts In The Past

Although surveyor John Ritchie discovered the island in 1771, the first ever real contact was made by an Indian merchant ship Nineveh about 100 years later which crashed upon the island’s many reefs.

When the shipwrecked crew made it to the land, they were attacked by the mysterious savages charging upon them with bows and arrows, greeting them with their guttural pa on ough.

This stirred interest for the later expeditions, the primary one being a British expedition by Maurice Vidal Portman taking captive a couple and their four children from the island. But the couple died of sickness they were not immune to when brought to Port Blair. [3]

Their children were returned to the island with gifts and for some time, there was no aggression from the Sentinelese.

Indian anthropologist Triloknath Pandit made several attempts at peaceful contact. When his frightening vessel approached the territory of the Sentinelese, the crew initially threw fish in order to appease them.

The Sentinelese aimed their arrows by running into the waves when the vessel reached their shore. What manifested on the beach was a murky glimpse of their culture where a female claimed a warrior for her and sat in the sand, ensconced in a passionate embrace.

Sources are yet to corroborate whether this act of communal mating was in the heat of the moment or something which the Sentinelese women exercised, calming their men who turned violent and hostile. [4]

Persisting In A Bygone Era Of History

The Indian Government has taken measures to further isolate the island by expanding an exclusion zone which prohibits plying of vessels in the area, even applying a penalty to any unwary outsider illegally intruding into the unchartered waters.

When the world was reeling under the shock of the cataclysmic tsunami of 2004, the Sentinelese was believed to have been wiped out.

With North Sentinel Island standing directly in the path of impact and tectonic plate raising the landmass to about 7 feet, it is inconceivable that the Sentinelese managed to survive, thereby ready to defiantly barge on an Indian Coast Guard Helicopter set out to bring evidence of their existence.

To the Sentinelese, we may seem like an alien threatening to eradicate their race but we need to take account the debilitating impacts of our civilization that left some of the aboriginal tribes hanging in extinction. [5]

Assimilation into a civil society never turned out well for the Jarawas and the Andamanese whose number crashed succumbing to disease, alcohol abuse, and the prejudiced imperialistic policies. Perhaps it’s better to respect their decision to choose not to live with us.

Hornbill Festival 2017 Is An Enriching Naga Cultural Experience: We LivED It