Sports Hub Australia: The Thunder Down Under

AFC Asian cup 2015, Border Gavaskar Trophy, India-England-Australia Tri-series, Australian Open and ICC world cup 2015′ – all of this in a span of three months. For all the sports fanatics out there, Australia is the place to be in the beginning of this New Year with the continent’s sporting calendar jam-packed with events of epic proportion.

The Australians are known for their love for sports and the same has been witnessed at these events with people turning up in huge numbers to support the teams. While there has been a lot of appreciation for the events that have been concluded, there remains a lot of anticipation for the most widely awaited event of 2015: ICC Cricket World Cup 2015. The story till now…

The 12th Border Gavaskar trophy was hosted by Australia. The first test match scheduled for 4th December 2014, was postponed to 9th December due to the unfortunate demise of Australian batsman Phil Hughes.

The first match was held at Adelaide with an extremely emotional and charged up Australian team determined to win the series and dedicate it to Hughes. In the final innings, India needed 364 runs to win the match and looked in control of the match with 242/2 (Kohli completed his century and Murali Vijay at 99*). But with two quick dismissals of Vijay and Rahane at 242, Australia came back strongly in the match and won the match by 48 runs.

The second test also had a similar story with the Indian team losing the match from a strong position. The third test ended in a draw but the biggest shocker of the match was delivered by Indian skipper MS Dhoni when he declared his retirement from test cricket after the third test. The final match also ended in a draw and Australia claimed the series 2-0. Virat Kohli was the stand out performer for India scoring 692 runs in 4 matches averaging 86.5. The Indian bowling attack was exploited by Australia (especially Steve Smith) and lacked any kind of depth or character. The Asian Football Confederation (AFC) cup 2015 began on 9th January with hosts Australia, Japan and South Korea starting as firm favourites to claim the 16th edition of the second oldest continental football championship in the world. The tournament consisted of the 16 strongest Asian teams competing to claim their supremacy.

Highlights of the event include participation of Palestine in their first major football competition (even though they finished last in their group, they played positive football and entertained the crowd thoroughly) and a quarter final defeat for the four-time Asian cup champions, Japan, at the hands of United Arab Emirates.

The final was held at Sydney on 31st January between Australia and South Korea, with the hosts claiming the championship with a 2-1 score line (the Koreans scored a 90th minute goal to force the game into extra-time and conceded a goal in the 105th minute). While Australia’s Massimo Luongo was adjudged the MVP for the tournament, UAE playmaker Omar Abdulrahman received a lot of appreciation for his performance, helping his team to a third place finish. The 32 match event saw an aggregate attendance of 650,000 spectators, with the final drawing crowd in excess of 76,000. The India-England-Australia tri-series began on the 18th January with the first ODI between England and Australia. Post their performance in the test series against India, Australia were the favourites to win the series and did so in style winning their 4 matches comprehensively (including the final match with 112 runs). India never looked like a competition for either team, while England delivered some strong performances especially in the bowling department. The series must have given ample confidence and belief to the Australian team with the World Cup right around the corner.

The first grand slam of the year, Australian Open, promised to be an exciting event with all the big guns fit and ready to fire. In the men’s draw, Novak Djokovic claimed his 5th Australian Open title winning the final against Andy Murray in a match that was well in balance till the second set, post which Murray lost his way. Serena Williams claimed her 19th Grand slam title (only behind Steffi Graf’s 22 titles) defeating Maria Sharapova in straight sets.

For all the Indian tennis fans, Leader Paes brought a lot of joy winning his 15th grand slam doubles title with Martina Hingis at the age of 41! Nadal and Federer both lost in the 4th and 3rd round respectively (earliest Australian open exit for Federer in 14 years). Youngsters Nick Kyrgios (19) and Madison Keys (19) impressed everyone by defeating senior players and reaching the quarters and semis respectively. Cricket is the national game of Australia. The country has won the World Cup trophy most number of times and the Australians are crazy about the sport. Does anyone need more reasons to be excited about this upcoming extravaganza? I personally am very excited and thrilled about this tournament. One of my friends is studying in Australia and has already bought the tickets of the final match (How I envy him!).

Australia start as the favourites because of their recent performances and the host status (Australian crowd knows how to boost their team). The biggest threats to the Kangaroos are South Africa (with AB de Villiers in top form and a deadly pace attack) and England (with a strong all round team) both looking for their maiden World Cup title.

In this edition of the world cup there are 14 teams divided into 2 pools (A and B) and 4 teams will qualify from each pool to play the quarters. India, the defending champions, have their work cut out to retain the coveted trophy. They ‘should’ qualify easily from the group stage (but then we thought so in 2007 and that didn’t work out the way we intended). As far as winning the cup is concerned, it might come down to the team with the strongest bowling attack (considering the support provided to bowlers, especially pacers, by the Australian pitches).

Fun Fact: Last time Australia hosted the cup in ’92 and didn’t even qualify from the round robin stage. All the hotels in and flights to Australia have been booked. The continent is the hub for sports at the moment. The crowd support and appreciation has further boosted the efforts of the organizers. All the events are well organized and well managed. The performance of Australia as a host for all these events has propelled it into the centre stage with wide spread acknowledgement and appreciation. It is a major boost for the country’s economy and stature in the global sphere. 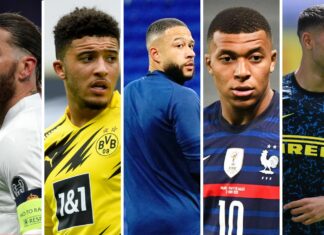 Kushan Niyogi - August 2, 2021
Football since time immemorial has recorded, both, amazing signings and godawful signings in the same transfer window. Some player transfers turn out to be...