Home Social Opinions Sourav Ganguly Calling His Daughter ‘Too Young For Politics’ Is How Indian... 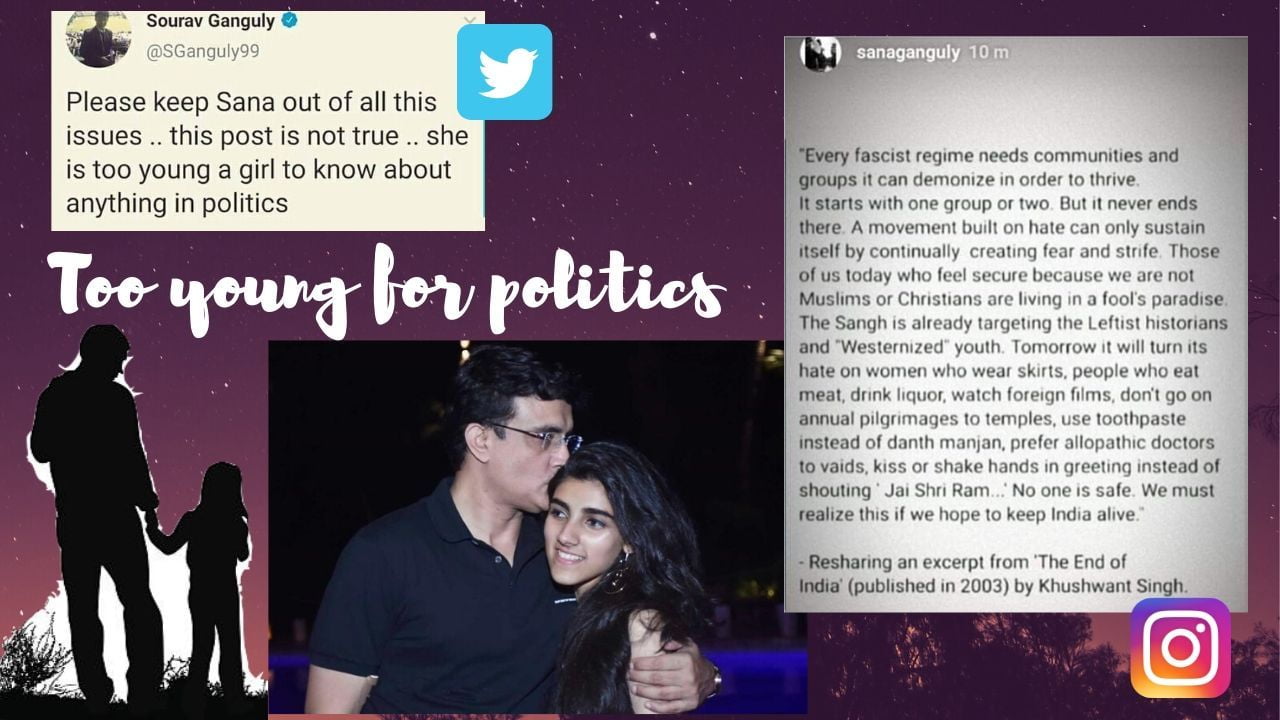 #SanaGanguly was trending on Twitter the other day and no, it was not because she has decided to make her Bollywood Debut. Over the last few days, students all over India are protesting CAA and NRC.

A lot of people have criticized the bill for its discriminatory nature and how it goes against our constitution. Sana Ganguly, daughter of former cricketer Sourav Ganguly, decided to voice her thoughts on the matter by quoting Khushwant Singh in her Instagram post.

Most of the celebrities have not said anything about the protests. There has been radio silence from Shahrukh Khan who is an alumnus of Jamia Millia Islamia University, I guess he’s afraid of getting into an intolerance debacle again. A teenager had more spine and courage than most of the adults.

However, it seems Sourav Ganguly wasn’t too happy with the post. He took to Twitter and remarked that what his daughter said isn’t true and she’s just a child who has no idea how politics works.

The excerpt that Sana posted was taken from Khushwant Singh’s book ‘The End of India’, which was published in 2003. This was the time when the NDA government led by Atal Bihari Vajpayee was in power.

The excerpt stated, “Every fascist regime needs communities and groups it can demonize to thrive. It starts with one group or two. But it never ends there. A movement built on hate can only sustain itself by continually creating fear and strife…”

The post, of course, relates to the present situation of the country which is getting more alarming by the minute. Many people praised Sana by calling her brave and fearless, but her father went the opposite route and relegated her status to an amateur.

My reaction to his post was- uh! typical Indian parent. People were quick to mention to Mr. Ganguly that if she’s old enough to vote, then surely she’s mature enough to understand politics too. These are some of the tweets that show how people reacted to Sana and Sourav Ganguly’s posts-

“Idealism only looks good on paper, it never works in real life”,

“I have more experience than you, I have lived through the Congress era of darkness”,

“You don’t know how the real world works you only have bookish knowledge”,

“The things you preach are just fragments of your wishful thinking.”

These are the dialogues I always hear from my father when I voice my dissent. They are his go-to lines whenever we argue about something.

That’s why Sourav Ganguly commenting that his daughter is too young for politics struck a sense of deja vu, for it is the same remark I’ve heard my father make about me and my sister. It is a very common reaction of parents toward their children in most Indian households.

The parents never want to admit that their child has grown up and has a brain of his/her/their own. Their ‘experience’ can’t ever be paralleled by us, and hence, they are always right, especially when our political ideologies don’t match.

Many believe that Sourav Ganguly was just trying to protect his daughter from the trolls who are posting hateful comments against anyone who is against CAA and NRC (BJP IT cell doing overtime).

Or, being the BCCI chairman, he doesn’t want to offend the present government and invite their wrath towards his family.

Many Indian parents believe that by concentrating on anything other than studies, we are recklessly sabotaging our life and future.

In their eyes, deriding their children is a way to get their children’s life on track and safeguarding their future because nothing works better than the weapon of humiliation (a tool they wield very well).

One of the favorite arguments used by my father, whenever I bring up any social topic, is to tell me to become an IAS officer. He says- “That way you’ll have the power to take some action against the things you keep rambling about, but you’ll need to work hard for it, simply writing your opinion achieves nothing.”

This way he instantly wins our fight and also pushes his agenda of making me get a government job.

My parents had a very different childhood than me, they had limited resources, had to face a lot of adversities and the financial restraints altered their outlook in life.

So, they always view me and my sister as entitled children. ‘You have it so easy’, ‘Humare samay mein aisa nahi hota tha’ (these things didn’t use to happen in our time), are some of the statements they use to chide us.

For them, having a nice house with all the amenities, sufficient food, and fulfillment of other basic needs should be enough to lead a happy life. So, if we complain about issues, then we are reduced to the status of ungrateful individuals.

Furthermore, our parents could never talk back to their parents, so they are unable to fathom why we debate and question their judgment. They deem our actions as disrespectful.

Just because your children disagree with you doesn’t mean that they don’t respect you. I always listen to my father, to know why he supports a particular cause, and if his reasoning can persuade me. I even accept my mistakes when his reasoning is right, but our parents never award us the same courtesy.

Most of our quarrels end with no resolution in sight. Our parents are adamant about their position, but we, the children, are also stubborn and wilful who will continue to make them listen to our perspective. Maybe, someday they’ll finally hear us.