Home ED Originals LivED it Running In The Tsk25k Kolkata Marathon In This Chilly Winter Season: We... 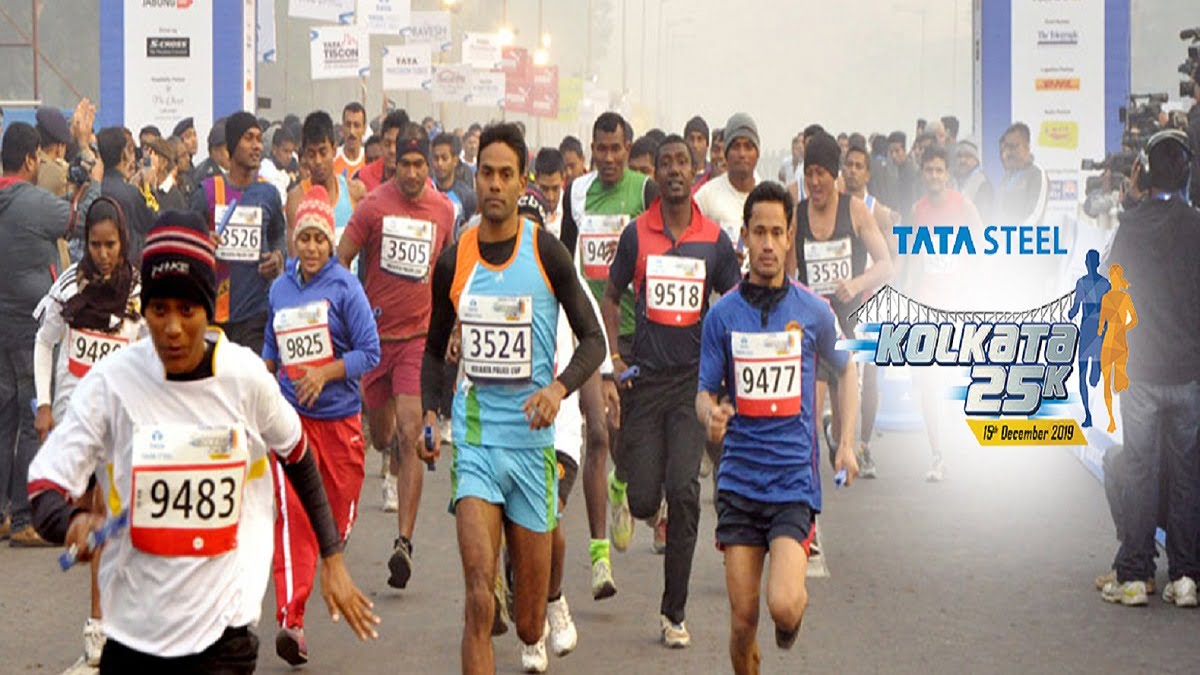 When I was a kid, I liked sports. As I grew up, I preferred indoor games more than outdoor. I never quite liked playing football for it being a body-contact game, but at the same time, I loved playing cricket, badminton and tennis.

Now that I think about it, I always preferred games which involved short bursts of speed and weren’t a matter of endurance. And, since I was always the last one to reach the finishing line in school races, I never thought I will take part in a marathon, ever.

Applying for the race

Even though the idea of taking part in a marathon didn’t seem feasible, it always intrigued me. So, when this year, I saw advertisements of Tata Steel 25k Kolkata Marathon, I thought, “Why not?”

Well, the event had four race categories – 25km,10km, 5km, Senior Citizen run. For a first-timer like me, the 5km run looked less intimidating. I thought that I was better off starting from the so-called ‘easy’ level before I jumped to a 10km or 25km run. Without much thought, I applied for the 5km Ananda Run and soon received the confirmation mail.

I was asked to receive my race Bib number- the racer’s tag number. The venue of the Bib collection itself felt all charged up, and I was handed over goodies along with my Bib. Gosh! The goodies…

Sadly, when I asked my friends to join me, they made it quite clear that when it comes to chilly December mornings, they would prefer a blanket over a marathon, any day. Fair enough!

The race starting time being at 8:40 am, we were informed that the gates would open at 7:30 am. Since I had to catch a bus and then walk a bit to the race grounds, I decided to leave my house at 7 am. The last thing I wanted was to reach late to a race.

ALSO READ: Seven Reasons Why You Should Run A Marathon Atleast Once In Your Life

Waking up early in a December morning wasn’t exactly pleasant. But, the early-morning ambience of Kolkata was worth the effort.

On reaching the race ground, I found out that there were many first-timers just like me. I also found a few groups who were taking part in the costume run as well.

We gathered up in the holding area at around 8:20, and soon we started walking towards the starting line. From there, it was just waiting for the clock to strike 8:40.

The race began, and everyone started cheering. The ambience was quite energetic, and it did feel great. Frankly, I felt quite happy that I stepped out of my comfort zone and took part in something that involved physical activity.

Although it was a marathon, few started to run from the word ‘go’ and the sensible ones preferred to jog instead. Since I had no intention of ‘winning’ as such but wanted to reach the finish line, I preferred to choose the latter. Likewise, while crossing the 200m mark, I caught up with the ones who sprinted forward –as they stood still trying to catch their breath.

I crossed the first time mat at 2km point, and it took me around 14mins.

After a few minutes of crossing the 2km mark, things weren’t as easy as it seemed like in the first half. I was prepared for this and chose to slow down instead.

The race organizers had several water-breaks en route, and they also gave electrolyte water to charge up the runners.

But what energized was – the city itself.

The race route had us run past Victoria Memorial, the iconic landmark of the city of Kolkata. It looked beautiful in the morning.

Also, the electrolytes did help.

When I crossed the 3km mark, and I found people slowing down. Interestingly, while few of the runners ran past, they encouraged us to keep running. Well, it worked like a charm.

After the 4km mark, it was more of a countdown, and this was the most exciting part of the race.

As I crossed one mark after the other, it felt great knowing that I’m about to finish a 5km marathon.

On completing, I received a text message from the organizers that said that I completed the race and my finishing time was 41m and 43 seconds. Not bad for a first-timer.

We were then handed over our finisher medals along with chocolate muffins and milkshakes.

I never thought I would actually take part in a marathon, let alone finish it. I know the achievement isn’t as great as I make it sound like, but hey, I am thinking of taking part in the next year’s 10km marathon race. So, that’s progress, right?