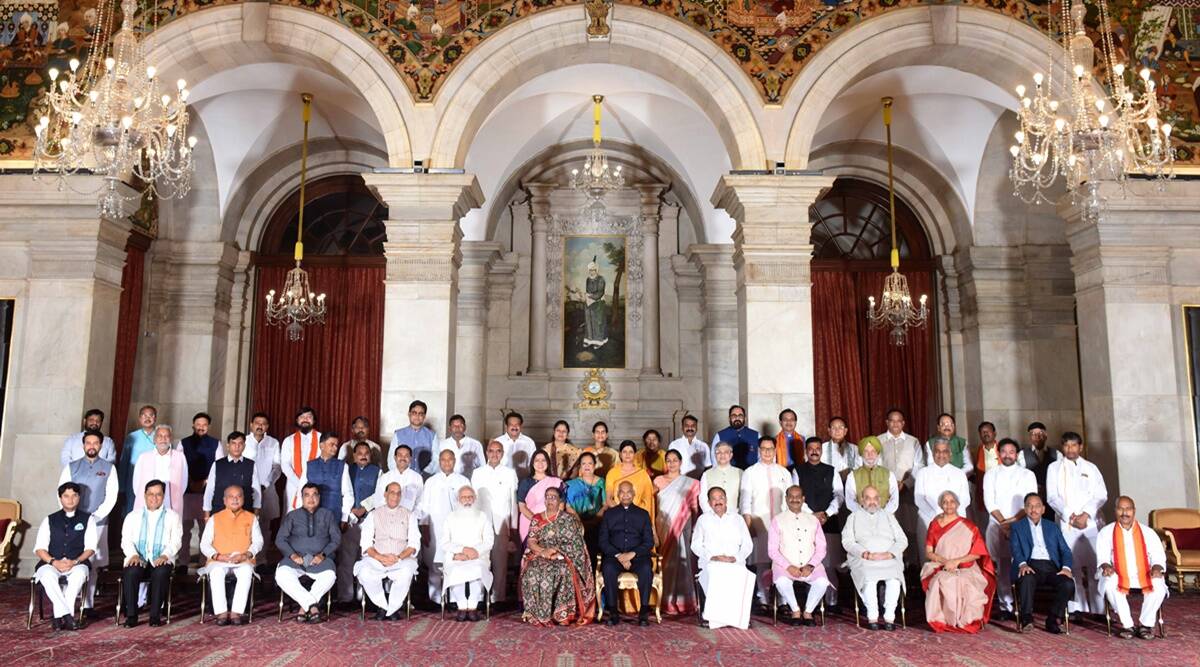 The Modi government has received another cabinet reshuffle, and the changes are significant and yet not. The seething argument of forming a government for the benefit of society stays, unfortunately, in doubt.

As the title of the article suggests, it remains to be seen if the new changes are but a coat of fresh paint in an already failing governmental structure.

From a violence harbouring minister in the Broadcast ministry to a logic pervading Minister of Health, the motley crew looks akin to a Comic-Con masquerade rather than a Cabinet.

However, with all things considered, it should not come as a surprise as Modi’s cabinet and his choice of Ministers have always had a penchant for controversy.

Who Came And Who Went?

The Cabinet Reshuffle of 2021 saw a flurry of new ministers assuming charge of 12 ministries, both Cabinet and State, and the reactions to the change are mostly varied. However, it is anyone’s guess to understand that the change in the ministries is mostly cosmetic.

To think that the Cabinet would be any different from the bunch of yes-men we already had is a fool’s dream. The following are a few changes that we saw that are posing to be the most significant.

The incumbent Union Minister of both Labour Ministry and Environment Ministry, Bhupender Kumar Yadav has brought about an immense amount of stir in and around the country. Most calls were celebratory, especially with regards to him assuming office in the Environment Ministry.

However, when it comes to the Labour Ministry, most of the populace has chosen to not get their expectations high, as the state of the country’s economy tells a story of doom rather than a tale of riches.

Bhupender Yadav, a lawyer and judicial consultant, took over the reins of the Environment Ministry from Prakash Javadekar, whose tenure was perceived as extremely hedonistic, to say the least.

The people of India have expressed their support for Yadav as he has projected himself as a better minister and politician than Javadekar, whose tenure in office led to several controversies, to put it mildly.

However, it is a bit too early to form a positive opinion of the man for much like most Indian politicians, he has been embroiled in an awful controversy. Mohan Delkar, former MP from Dadra and Nagar Haveli, had in his 15-page suicide note accused the Law and Justice Committee Chairman, Bhupender Yadav.

Dr. Harsh Vardhan, the former member of the Modi Cabinet, in charge of Health and Family Welfare, was replaced by Mansukh Mandaviya, and it led to some controversial happenings. I believe that before everything, we need to view Indian society through a microscope. The Indian society has always believed in the intellectual and cultural superiority of the English language.

The colonial hangover that our society and our Twitterati still suffer through was only brought to the forefront with this. However, there were people who took to providing Mandaviya with a pillar of support to rest upon as they understood that to be a Minister, you don’t need to know English.

It must also be understood that a few concerned citizens have pointed out that most medical jargons are in English, and thus, acute knowledge of the language is essential.

Mandaviya, however, has assured the country of carrying out his duty to the T, and one would not have to worry about his abilities at the helm. He had also been provided with the Chemical and Fertilizers Ministry.

Anurag Thakur succeeded to the helm of the Information and Broadcasting Ministry upon ousting Prakash Javadekar, who has been shown the door. Anurag Thakur’s appointment has come as a shock to the entirety of the Indian populace and his past (mis)actions only seek to prove the reason as to why.

The Information and Broadcasting Ministry has since forever been perceived as a more ‘liberal’ version of Nazi Germany’s Propaganda Ministry. It was a cause of concern when Smriti Irani used the I&B Ministry’s incessant power to further the BJP’s cause.

Fast forward to 2021, we are faced with the same predicament wherein we have a hedonistic individual heading the coveted I&B Ministry. Case in point, Anurag Thakur was gagged by the Election Commission during the Delhi elections owing to his ‘Goli Maaro’ speech.

Can We Expect Things To Change?

We can hope for the sun to rise in the west and yet it is destined to rise in the east. One cannot change predestined occurrences unless the sun has a change of heart, or in this case, the ministers move beyond being mere ‘yes-men’ of the government.

To put matters into perspective, we need to look at the changes made. The tokenism of having ‘representation’ from all corners of the Indian society can make anyone detect a mere vote grubbing technique when they see one.

The mismanagement of the COVID crisis, coupled with numerous calls of it being a political party for the Hindus, has finally led them to employ a tactic to divert the attention of the masses.

To ascertain as to how it is a mere marketing ploy, one would only have to look at the sole fact that the Ministries that have undergone a change are mostly secondary portfolios.

The one portfolio that is worrisome due to its importance is the I&B Ministry and Anurag Thakur’s terrifying history. The other portfolio reshuffle that strikes as uncanny is the change in the administration of the Health Ministry as Dr. Harsh Vardhan’s Ministry was the best performing ministry, statistically.

However, it must also be stated that Mandaviya has proved himself time and again on the field, and it is only fair to provide him with the benefit of the doubt.

Being an Indian, the only thing that I would want for my country is its success and the denouement of peaceful coexistence. My biases are not beyond the basic needs of a human being, and in all certainty, I will keep my expectations high with the new cabinet regardless.

The Curious Case Of First Ever Vaccine That Reached India