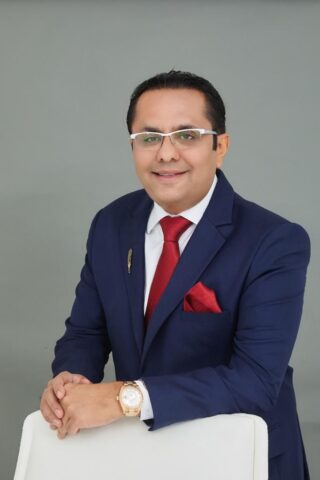 The success of Danube Group is intrinsically linked to the journey of its Founder and Chairman, Mr. Rizwan Sajan who was born and brought up in a middle class family in Mumbai, India, but went on to script his own tale of glory.

The famous quote of Henry Miler that “every man has his own destiny: the only imperative is to follow it, to accept it, no matter where it leads him” stands true with the life story of Mr. Sajan who experienced considerable hardships and adver- sities only to win over them and forged his own path to create his own business empire with a global presence.

He is a man who held his family’s hand at the tender age of 16, and fought his way to give them a decent life. His father’s death interrupted his education and there was no money to run the family, but he was not the one to give up without a fight.

He stepped out on to the mean streets of Mumbai, to change his fortune. He sold books, festival firecrackers, delivered milk and did all kinds of odd jobs, but never let the adverse circumstances perturb his determination. When the odd jobs didn’t get him the money to keep his family afloat, he finally wrote to his uncle to em- ploy him in Kuwait.

On turning 18 he was offered a job in Kuwait in 1981 and the destiny smiled for the first time on him. He earned his stripes with his hard work where he got an offer of AED 1500 (125 KWD). He also found his life partner to back him in his struggle. But the success that he gained after all the hardships was short lived.

The invasion of Kuwait in 1990 made him lose everything, and he was back on the streets of Mumbai again looking for a job. But eventually he took up a job in a bro- kerage firm dealing in building materials in Dubai at AED 1500.

Finally in 1993, he decided to set up his own building material trading company and Dubai was of course his lady luck. He was in the right place at the right time and as Dubai grew his business grew by leaps and bounds. He never missed an op- portunity and took the risks that got him to the top. Today he is the chairman of Danube Group with an annual turnover of around $ 1.3 billion and Rizwan Sajan’s personal net worth runs into billions of dirhams.

The Danube group includes the famous building materials company,  complete home solution brand Danube Home, and the UAE-based affordable housing pioneer Danube properties. Mr. Sajan says, “Life can throw you off gear but it’s your will and determination that keeps your head above water.”

A man with the ‘Midas Touch’, Mr. Sajan has built his company into the undisputed market leader for building materials in the GCC and now slowly and steadily mov- ing his footprints towards property development and home improvement. Being a top ranking business icon, he has been a source of inspiration to millions. He says  it is his business strategy and the ability to think differently which has helped to build this empire.

Ranked 7th among the ‘Top 100 Indian leaders in the UAE’ List by Forbes Middle East, Mr. Sajan’s story is made of a very simple lesson: A man’s hard work can turn a small organization with humble beginnings to become a brand to reckon with. It was not just his experience but foresight, perspective and commitment that built Danube from a two-person team to a strong business empire with a global foot- print.

His mantra for success is very simple: find the right people, then trust and empow- er them to run the business and this is exactly how he has steered his company to success. A workaholic by all means, Mr. Sajan has always believed that there are no shortcuts to success. Hard work and determination are the keys to his victory.

In recognition of Sajan’s leadership skills and abilities various honours have been conferred upon him, such as Dubai Quality Award, and ‘Top 50 Most Powerful Indi- ans in the UAE’ by Arabian Business. He is six times winner of the Forbes Top Indian Business leader in the Arab World and three times winner of Top Real Estate Com- pany in the Arab World award by Forbes Middle East.

Mr. Sajan also has an altruistic streak in him. In order to make substantial contribu- tions to the society as well as to bring about a positive transformation in the lives of many workers in Dubai, Mr. Sajan started the Danube Welfare Centre in No- vember 2012. The centre offers a number of free training courses to help unskilled workers improve their language skills and further develop their career. Under the astute leadership of Mr. Sajan, Danube Group is all set to take a quantum leap for- ward.

Established in the year 1993, Danube Group (Danube) began with a small trading enterprise as a dream, but today the dream has been transformed into reality. Over the last more than 25 years, Danube has charted a path that transformed from being just one shop with one employee to global employee strength of over 3,300 people with over 50 locations in nine counties.

As one of the largest suppliers in the GCC region today, Danube’s operations are dominated by two main segments- Building Materials FZCO and Danube Home (Home Interior/ Décor Solutions), which brings together a variety of state-of-the- art products available at showrooms strewn across the MENA region.

Danube has successfully expanded itself in UAE, Kuwait, Oman, Bahrain, Qatar, Africa and India to name a few among others. Danube occupies more than 5.5 mil-

lion square feet of land in JAFZA which makes it one of the biggest land bank oc- cupiers in JAFZA. Its warehouses across the UAE stock more than 50,000 products to the envy of its competitors.

Registering its dominance in the global market, Danube recorded a tumover of 1.3 billion USD dollars in 2018 and has been growing steadily ever since. The group’s clients range from FTSE companies to large organisations as well as some small lo- cal businesses striving to expand their presence in every nook and corner of the world.

Danube Building Materials delivers a well-connected experience and a top-notch amalgamation of the varied products of the very famous melamine faced chip- boards and high-pressure laminates under the parasol of Nouveau Surfaces – an ex- quisite blend of the iconic and elite European brands Arpa and Viaggo from Italy and Evola from Belgium.