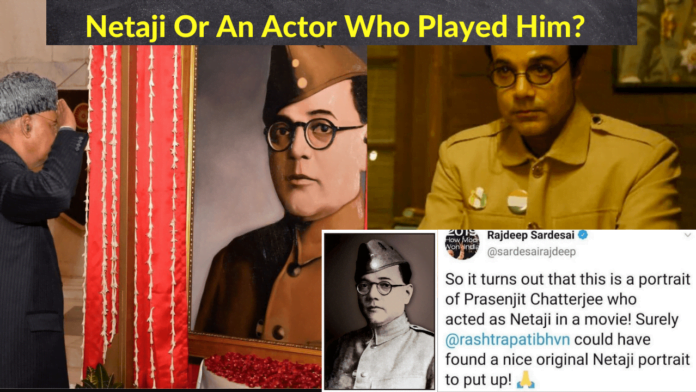 The President of India, Ram Nath Kovind, unveiled a portrait of Netaji Subhash Chandra Bose on January 23 as a tribute to the freedom fighter on his 125th birth anniversary. 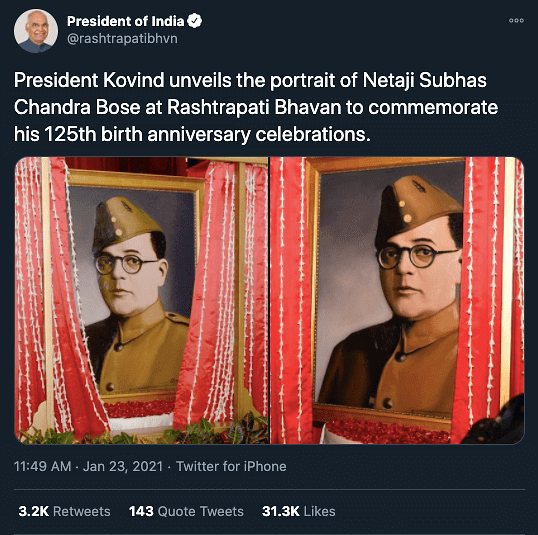 What the center did not see forthcoming was the allegations and controversy over Netaji’s portrait. Peddled by Trinamool Congress MP Mahua Moitra, India Today anchor Rajdeep Sardesai, and well-known journalists like Barkha Dutt, the Twitterati stormed the platform with tweets claiming the portrait to be “fake”.

Netaji Or An Actor Who Played Him?

The series of errors started off when the above-mentioned personas announced on Twitter that the portrait unveiled by the President is that of the Bengali actor who portrayed Netaji in a biopic.

The officials at Rashtrapati Bhavan dismissed the allegations soon after. A senior official who wished to stay anonymous told IANS “We do not comment on tweets. The painting was made in Rashtrapati Bhavan and you think that it is a painting of an actor. What kind of question is it? Something is being run on Twitter, but it may be politically motivated. What can we say on it?” 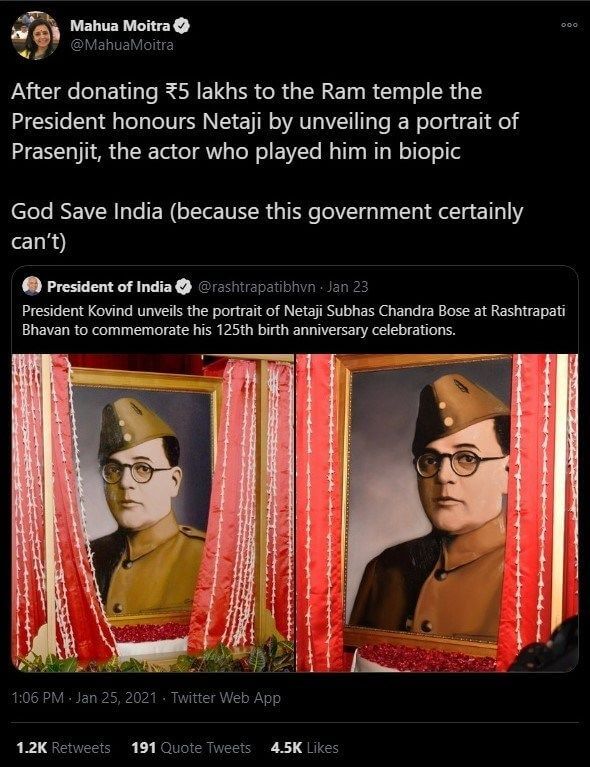 Barkha Dutt tweeted “shocked to hear that the President unveiled the portrait of actor Prasenjit Chatterjee, who played #Netaji instead of the real deal…” which reinforced the confusion further. 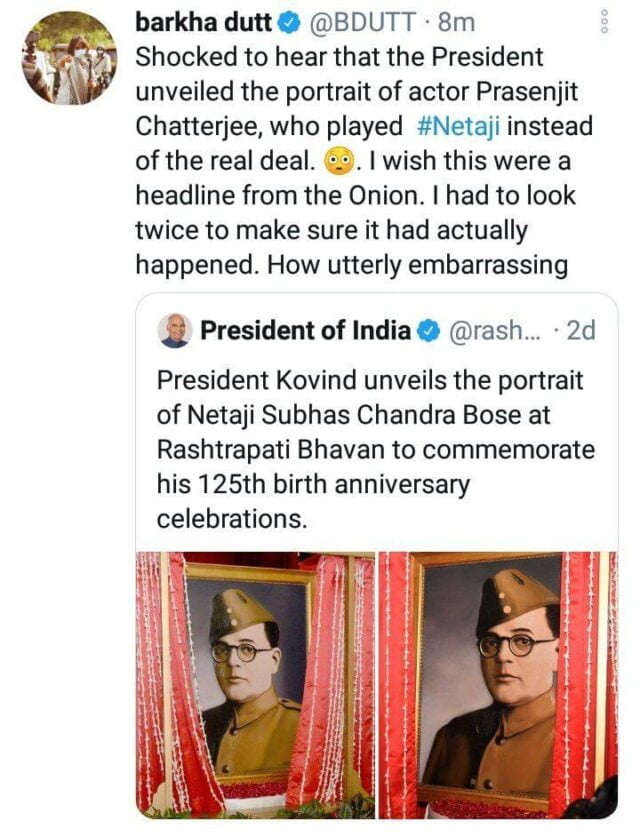 Rajdeep Sardesai, the renowned anchor of India Today, has been in the news for the past few days now.  And yet again he hopped on the train and tweeted, this time claiming that this portrait was a fake. 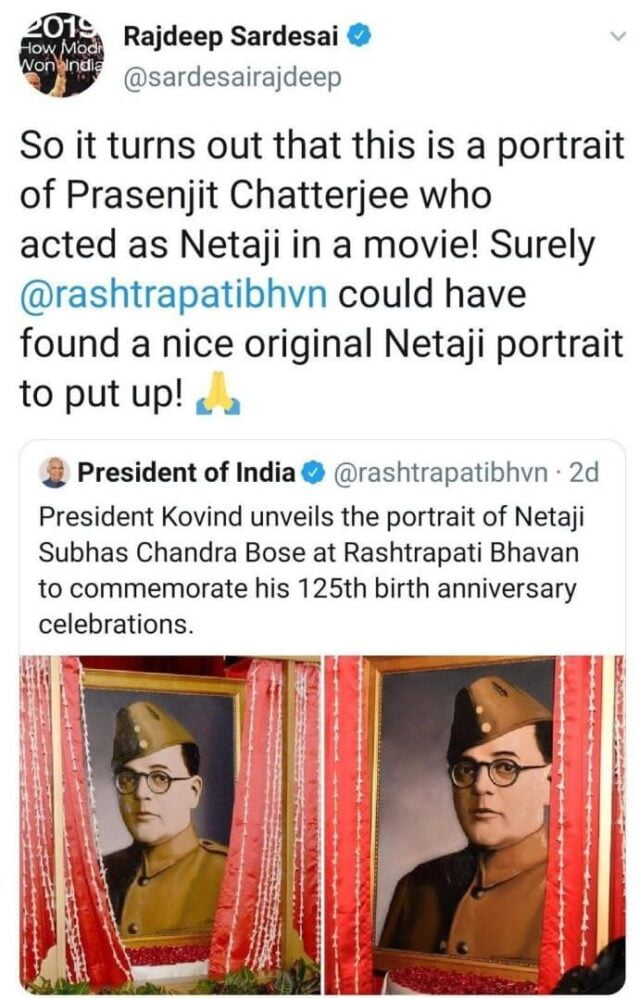 The anchor was taken off-air not so long ago by India Today due to the propagation of ‘false news’ regarding the farmer’s protest without any proof.

The Centre also gave a statement in response to the allegations on Monday. The government clarified that the portrait is, indeed, of the freedom fighter and not the actor.

The portrait was based on an original photo of Netaji. 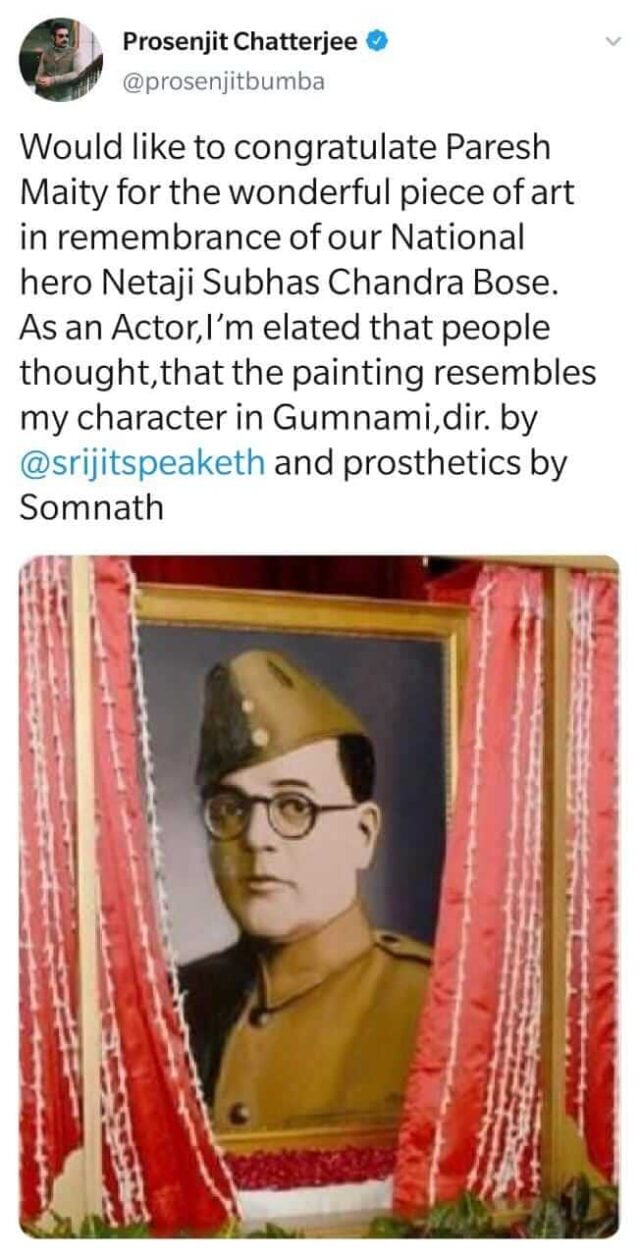 Thereafter, Rajdeep Sardesai, Mahua Moitra, Burkha Dutt all deleted their initial tweets that claimed the portrait to be fake.

The greatest rebuke came from the President’s press secretary, Ajay Kumar Singh, who wrote a letter addressing Aroon Purie, the founder and editor-in-chief at India Today. 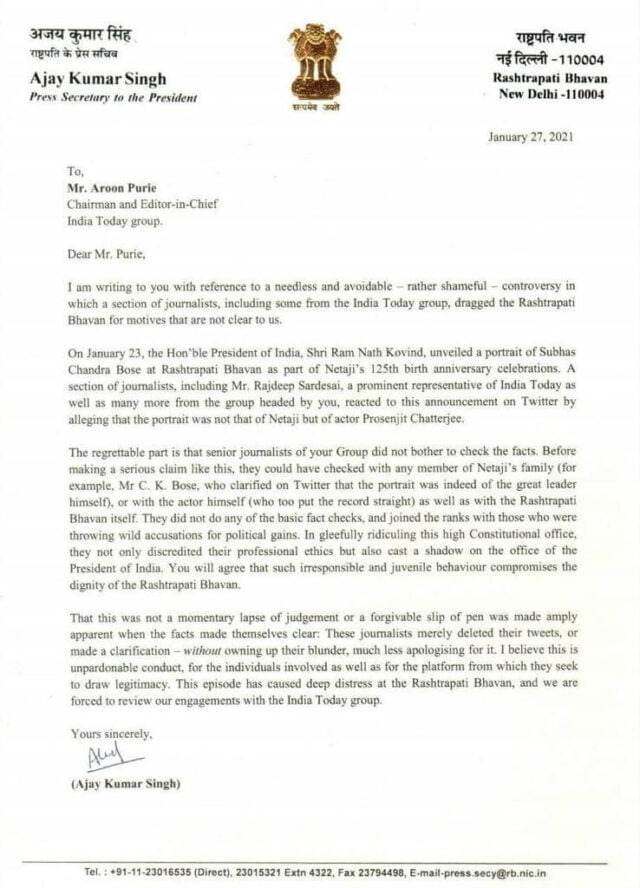 Ajay Kumar said that it was ‘regrettable that a senior journalist of India Today did not bother to check the facts before making a serious claim like this’, thus pointing towards Rajdeep.

The letter also noted that “these journalists merely deleted their tweets, or made a clarification without owning up to their blunder, much less apologizing for it.”