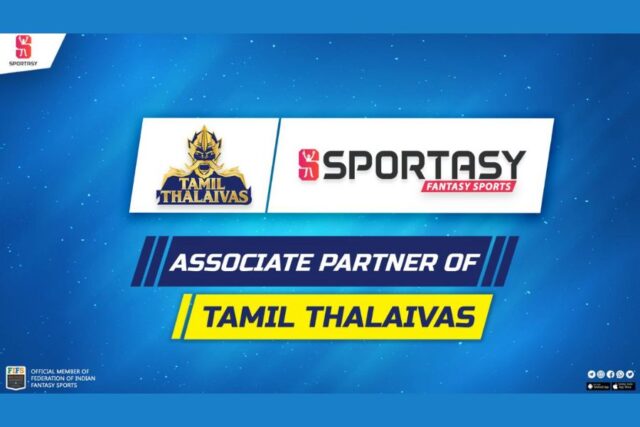 October 1: In a big move to strengthen their foothold in the Fantasy Sports market, Sportasy – India’s one of the fastest-growing daily fantasy sports platforms, has signed a multi-year deal with Tamil Thalaivas in the Pro Kabaddi League – India’s second most watched sporting event.

Earlier this year, Sportasy signed a deal with five teams in India’s second-largest cricket league – Tamil Nadu Premier League. The company had roped in Indian cricketer Shivam Dube as their brand ambassador. After Cricket, Sportasy has ventured into the sport of Kabaddi with the Pro Kabaddi League with this multi-year deal with Tamil Thalaivas. The team roped in the famed raider Pawan Sehrawat this year and is looking to turn around the team’s fortune this season.

The Founder and CEO of Sportasy, Sabarish Rajendharan, said, “We are creating a sports fantasy platform that has something to offer for every sports fan out there, not just Cricket fans. This deal is a step towards it. We are pleased to be a part of Tamil Thalaivas and become a part of the Pro Kabaddi League. We are sure the Kabaddi fans will be equally excited about this.”

Season 9 of Pro Kabaddi League saw record-breaking auctions. The league has transformed the sport of Kabaddi with revolutionised innovations and support from the Amateur Kabaddi Federation of India (AKFI), backed by participating members of the International Kabaddi Federation (IKF). The league has succeeded in promoting and elevating the sport of Kabaddi in India and the world.

On the association, Nikhil Bhardwaj, Director of Tamil Thalaivas, said, “We are extremely happy to welcome Sportasy as the associate sponsors of Tamil Thailavas for the upcoming Vivo PKL. We have no doubts that this partnership will augur well for the sports platform. Fan engagement lies at the core of this partnership, and we are confident to deliver maximum value for Sportasy, given the very passionate and loyal fan base Tamil Thailavas has built over the years. We look forward to a fruitful association together.”

Sports fans drive India, and fantasy sports allow the fans to be a part of the game by allowing them to make their teams using their analytical understanding of the sport. Sportasy is an Ernakulam-based gaming platform that offers fantasy sports contests and tournaments under one roof. The fans can monetise their in-depth knowledge of a particular sport through this innovative platform. Besides giving a platform for an unmatched fantasy sports experience, Sportasy is backed by solid customer support to address grievances with quick and efficient solutions. And, winning the trust of the users, the Sportasy app has over 1M subscribers in India.

With a massive population of 1.3B, India is the biggest fantasy sports market in the world. However, the most significant contributor to fantasy sports revenue is Cricket. Platforms like Sportasy are venturing into diverse sports allowing the sports fans to be a part of multiple sports along with Cricket. This multi-year deal with Tamil Thalaivas is a big step towards roping Kabaddi fans into the world of fantasy sports. Fans can start monetising their sports skills by downloading the app on their Android phones, registering on the platform, and participating in daily contests. The iOS version of Sportasy is launching soon.