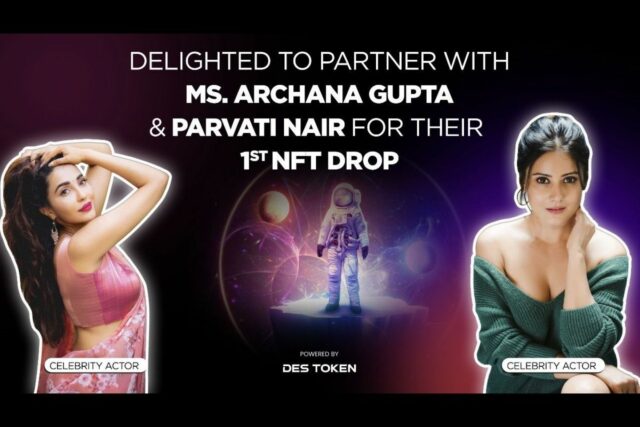 Parvati Nair is a model and actress who works predominantly in Tamil and Telugu movies. The actress made her debut in Kollywood with Ajith’s Yennai Arindhaal, which was directed by Gautham Vasudev Menon. The actress played Arun Vijay’s wife in Yennai Arindhal. The action thriller film has received positive reviews from critics.

Parvati was last seen on the big screen in the Tamil film Seethakaathi, which was directed by Balaji Tharaneetharan, It was also Vijay Sethupathi’s 25th film.

While speaking about her new NFT collection, Parvati said, “I am excited to share my first NFT space journey exclusively on DeSpace Protocol. Connecting with my fans on a new platform like this is exciting.”

Recently, the gorgeous actress crossed the 1.2 million followers mark on Instagram. Apart from her on-screen appearances, Uttama Villain actress is quite active on social media and has been constantly sharing stunning pictures and videos on the photo-sharing app. And it comes as no surprise that Parvati has numerous fan pages dedicated to her and often shares stunning pictures of the actress.

Meanwhile, Archana Gupta is an Indian model and actress, who primarily works in the South Indian film industry. She has acted in Hindi, Tamil, Kannada, Malayalam, Telugu, English, and even in a Russian film.

The actress recently acted in a web series called Poison for Zee5 along with Arbaz Khan, Rimi Sen, Freddy Daruwala, Tanuj Virwani & others. Archana Gupta also played a lead role in the short film Banjar alongside Maniesh Paul. She also participates in stage shows and is a prominent celebrity endorser for brands and products. She is based out of Mumbai.

In 2008, she made her acting debut at a very young age in the Telugu film, Andamaina Manasulo. She thus established herself as one of the leading contemporary actresses in Telugu cinema and Tamil cinema. She subsequently rose to prominence by starring in several critically and commercially successful Kannada films such as Circus, Lift Kodla, Karthik, Achchu Mechchu.

On joining DeSpace Protocol, Archana said “I believe it will be the best experience for me. It’s going to be huge.”

Archana has developed a massive social media fan base on Facebook. As of this time, the influencer has accumulated around 13 million followers. She is quite active on Instagram having followers of 1 million.

Chief Marketing Officer, DeSpace Protocol, Micky Irons says, “The NFTs have taken the digital space by storm, with celebrities and corporations joining the craze, with these digital items finding their way into everything from the art to video games.”

CEO and Co-Founder of DeSpace, Obasi Francis says, “We are focusing on creating a robust NFT ecosystem through premium NFT collection and play-to-earn NFT games. So while we believe in making NFTs accessible to everyone in the world, we also want to ensure a wholesome and transparent ecosystem.”

DeSpace Protocol is an advanced DeFi and NFT navigation tool that empowers users with a range of DeFi and NFT products from around the crypto ecosystem, including products, all from a single interface.

DeSpace is supported by DeChain, which is a Layer-2 blockchain solution that connects disparate chains and allows easy transactions across several bridges. Every time a user transacts, they are rewarded with DES, a native token that also unlocks a massive amount of utility within the platform.