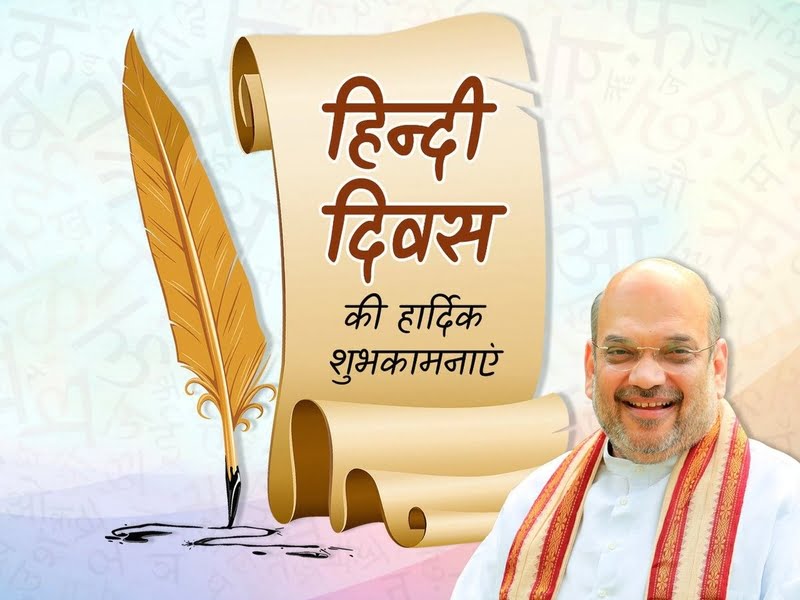 Let’s do a small activity. Mentally paint a picture of a beautiful scenic view that includes mountains, a river, a clear sky with birds, trees, and a house with some people.

Now, you have to uniquely describe the entire picture i.e. all the different elements in it but you can choose only one color to do so.

Baffled, are you? Don’t worry. None of us can choose only one color by any stretch of imagination, except our talented Home Minister Amit Shah. His color would be saffron, of course.

How do I know that? Well, on Hindi Diwas today, Mr. Shah made a strong pitch for Hindi to become the language of the entire country.

On this occasion, the Union Home Minister tweeted in Hindi to convey,

“India is a country of different languages, and each language has its own importance, but it is necessary to have one language for the whole nation that can become India’s identity globally. Today, if there is one language that can unite the country, it is the most spoken language in India- Hindi.” 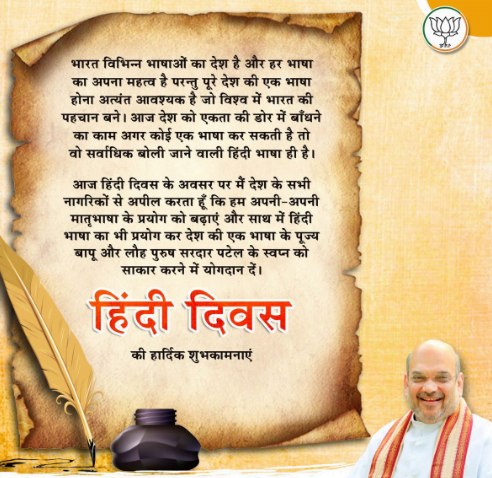 Although he acknowledged the presence and importance of other languages, his tweet by and large smacked of his belief that Hindi should be made the national language of the country.

As expected, this invoked strong reactions from the opposition parties who are vehemently against this proposal.

DMK chief Stalin categorically said, “Is it India or Hindi-a? India stands for unity in diversity. The BJP-led government is trying to destroy this idea. The home minister should withdraw his statement.”

AIADMK leader K Pandiarajan remarked, “If the Centre imposes Hindi unilaterally, there will only be adverse reaction and no support, not only in Tamil Nadu but also in states like Karnataka, Bengal, and Andhra Pradesh.”

CPI condemned Amit Shah’s statements and called them “an attack on India’s federal structure and diversity.”

India Is Bigger Than Hindi, Hindus And Hindutva

India is a land of 122 regional languages and around 19,500 dialects. Of these, according to the Eighth Schedule of our Constitution, 22 languages are considered scheduled.

Most importantly, India does not have a national language because it is home to people of varied cultures, ideologies and languages who are living together in harmony.

India is diverse and culturally rich not despite these differences but because of them.

Every time the BJP and the RSS try to shove the idea of a ‘Hindu Rashtra’ and making Hindi the national language down our throats, I want them to chew the idea of ‘Unity In Diversity’ till the time they completely digest it.

Everyone in this country is entitled to live and breathe their own sense of nationality, notwithstanding the language he or she speaks.

So, when Mr Shah said what he said, Twitterati was naturally livid. To voice their dissent, they trended #StopHindiImposition. Here’s what they wrote. 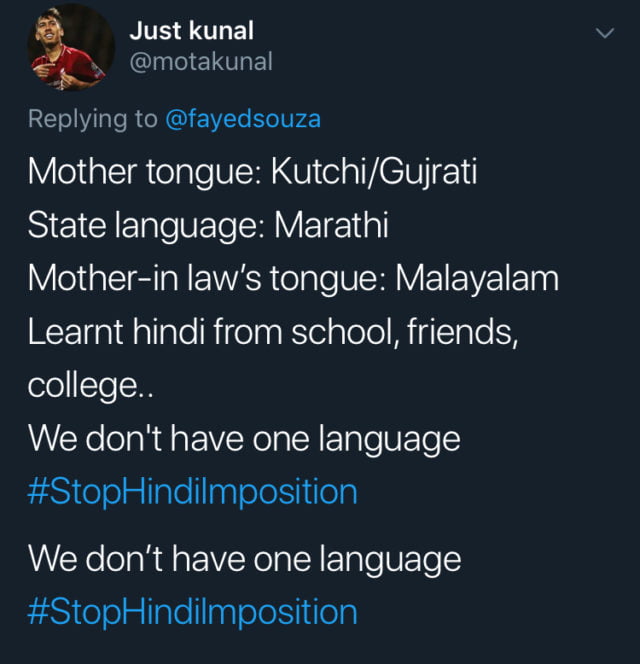 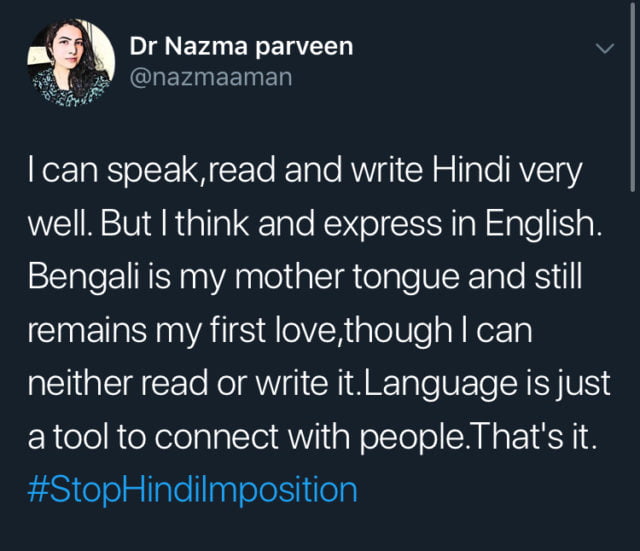 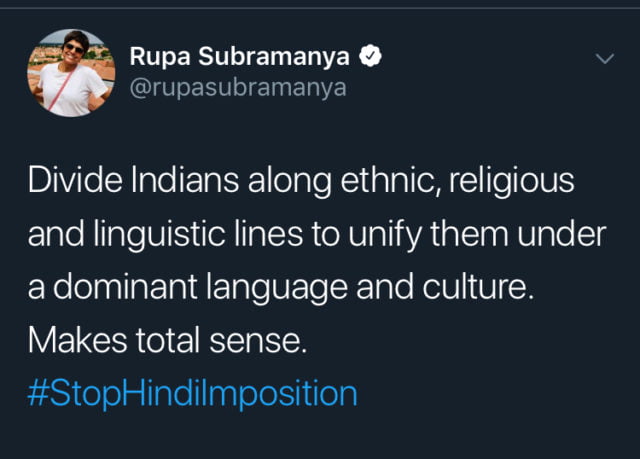 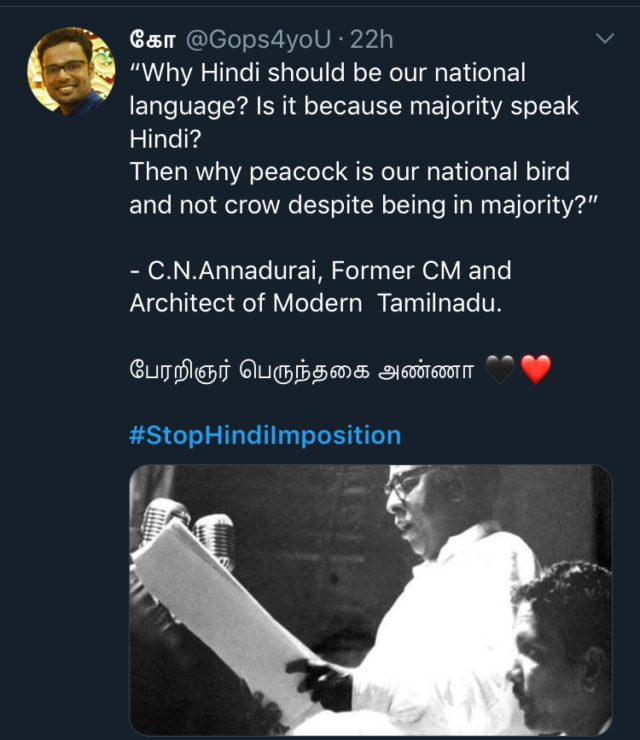 Focus On Issues That Matter

Amit Shah believes that Hindi is the only language that can unite the nation. However, I beg to differ.

The country stands united in its suffering due to the economic slowdown. All of us are yet to recover from the trauma that ensued post demonetization.

We can understand the pain and agony of the students who can’t find quality jobs after spending their parents’ hard-earned money on education.

We stand in solidarity with millennials who have to shoulder the burden of “bringing down the auto sector” as per Finance Minister Nirmala Sitharaman.

We can fathom the helplessness felt by the people of Jammu and Kashmir who have been under a lockdown for over a month now.

Guess what, Mr. Minister? None of this necessarily requires us to speak and communicate in Hindi.

So, if you really want to preserve India’s global identity, you need to resolve existing real issues that affect every citizen instead of concocting new ones that go against the spirit and strength of Indian democracy.

In Pics: Beautiful, Deep Meaning Hindi/Urdu Words That Can Beautify Any Of Your Instagram Captions And Pictures