Nawazuddin Siddiqui is a name that resonates with the unconventional. It’s a name that is often associated with the social concerns plaguing society.

He has been an A-list actor for a while now and is highly sought after by directors as well as his audience. He has set a standard wherein if he fails to meet it, it automatically brings him into the limelight.

One such incident was of his involvement in a Pakistani advertisement for a washing machine brand called Kenwood, where he advertised sexism through trivialising domestic violence.

What is the advertisement?

In a Pakistani advertisement, Nawazuddin Siddiqui, is seen propagating the idea of domestic violence.

The ad begins with Siddiqui sitting and chatting with his friends. He tells them about a fight he had with his wife and bragged about how he beat her up because of her ‘misbehaviour’. He referred to it as “dhulayi” or beating someone up, in lay Hindi.

Also Read: “Humne Toh Do Baar Mazey Kar Liye”; Said Nawazuddin Acc. To Chitrangada When He Didn’t Stand Up For Her

Why is it problematic?

The advertisement subsequently proceeds to its main agenda, that of promoting its washing machine.

Here, the word “dhulayi” is used as an innuendo where it is used in reference to the wife being beaten up and with respect to the superior quality of the washing machine.

The advertisement becomes more interesting, when Siddiqui’s bragging is cut short by his peers pretending to behave like his wife walked into the room. This startles him out of fear and his peers laugh and joke about it.

The trivialisation of an issue as grave and sensitive as domestic violence, only consolidates its position in the existing social structures.

It’s the easiest way to normalise it and consider it to be a matter of comedy and something that should be bragged about.

This inherent sexism, poured out of the advertisement with such ease, that hardly anyone could’ve pointed out how problematic it is.

The advertisement was never telecast and the only reason it’s being talked about, is because it leaked prematurely.

The electronics company, Kenwood, apologised for the advertisement’s insensitivity and its lapse of judgement. They agreed to the fact that there was a lack of understanding on their part, as pointed out by others.

“We apologise to our audience for hurting their sentiments and provoking this sort of an issue”, the company said in the issued statement. 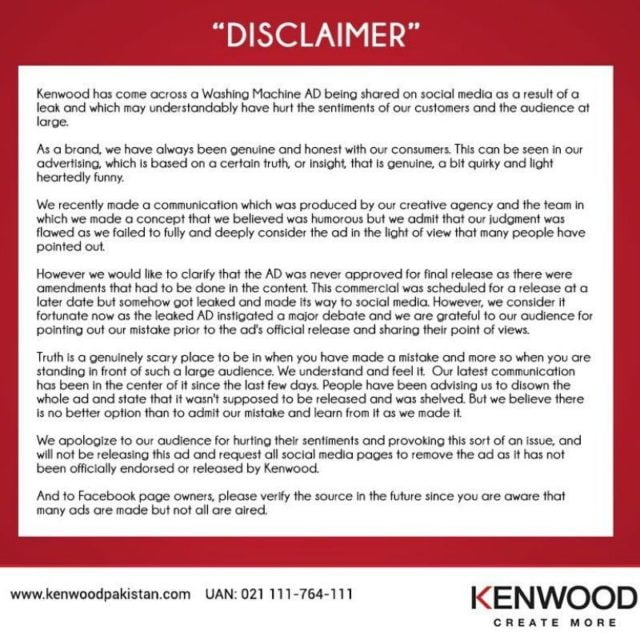 As A Man, My Fear Of Being Falsely Accused Or Misunderstood When I Talk Nicely To A Girl