India was truly a rich and bountiful country at one point of time, which is proved once again by the Christie’s Maharaja Mughal Magnificence auction in New York.

The noted British auction house is known for selling various rare and historically significant pieces from both public and private collections.

This time the Maharaja Mughal auction at their New York branch broke the record for being the highest priced auction for any Indian art with Mughal objects coming at a total of $109,271,875, all gone within 12 hours.

It lands just short of being the highest single-owner collection to go at the auction, with that place being taken by collection of Elizabeth Taylor sold in 2011 that totalled at $115.9-million.

Some of the thing sold at this auction were: 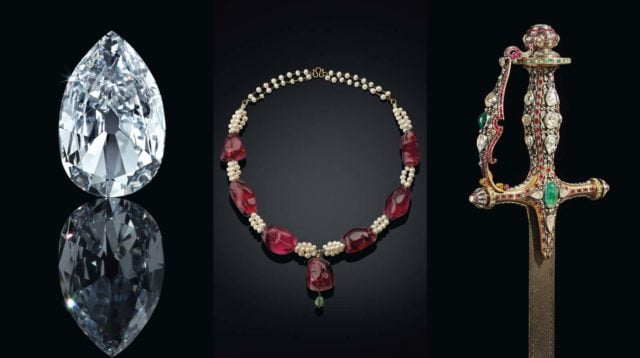 In total, around 400 items were up for auction that covered about 500 years of Indian history. 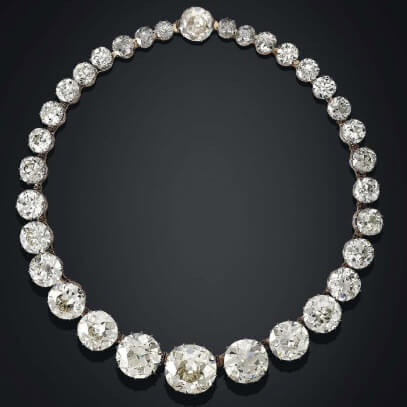 The Golconda diamond rivière necklace from the collection of Nizam of Hyderabad, was sold for $2,415,000.

The neckpiece dating back to 1890s consists of over 200 carats of Indian diamonds. 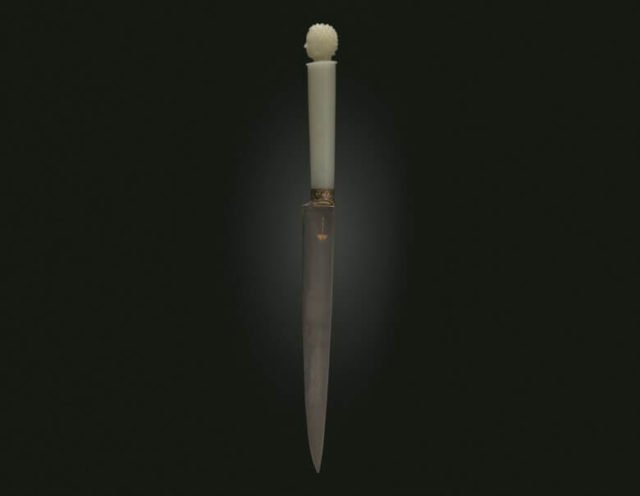 The auction lasted a solid 12 hour period with bidders coming in from over 45 countries, putting it at an impressive place. 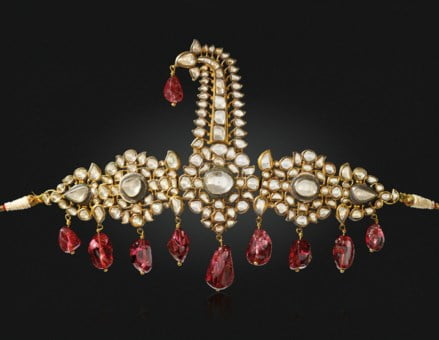 This is a 17th century turban ornament made of diamond and spinel worn by the Nizams of Hyderabad. 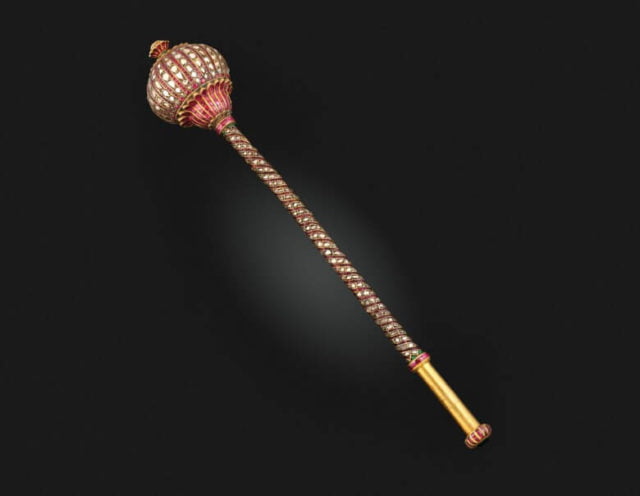 Apart from pieces worn by Mughal emperors like Akbar, Shah Jahan, Jehangir, Aurangzeb and others, the collection also had items from other notable kings of India ranging from the Nizams of Hyderabad to Nawab of Arcot, Tipu Sultan of Mysore, Maharajas of Baroda, Indore, Patiala, Kapurthala, Nawanagar and Idar and Maharana of Udaipur (Mewar). 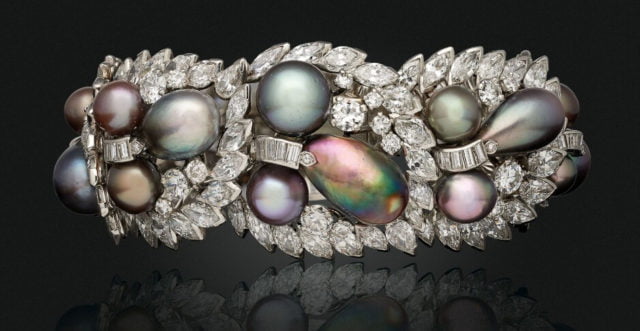 Worn by Maharani Sita Devi of Baroda (1917-1989), wife of Maharaja Pratapsingh Gaekwar of Baroda, this Cartier piece was commissioned in 1953.

The grey pearl and diamond bracelet was also sold in 1974 by the Crédit Municipal de Monaco to do away with the debts the Maharani had accumulated.

As per sources, the Maharani used to spend a lot of time travelling in Paris and thus could have come in contact with the jewellery house. 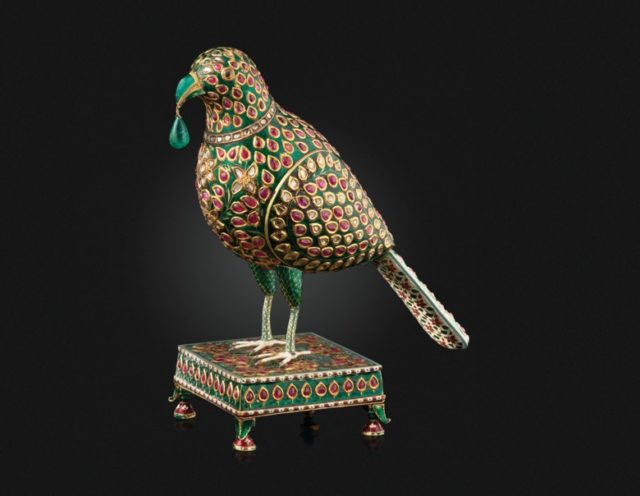 29 of the 400 pieces went for over $1 million, showcasing the high value bidders were willing to pay for them. 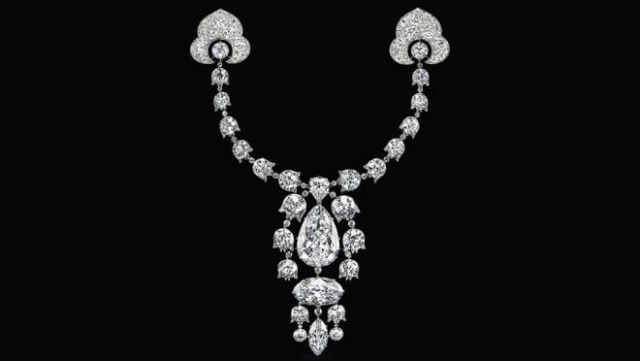 This piece is called Bell Époque Devant-de-corsage or ‘stomacher’ since its a brooch that fits into the dress of a woman and hangs down to the stomach. 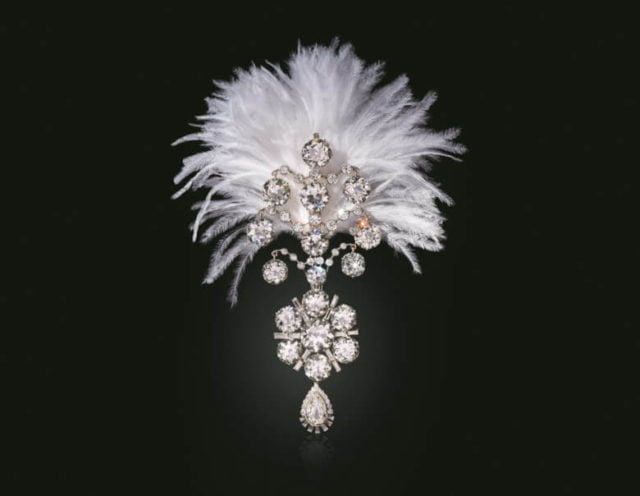 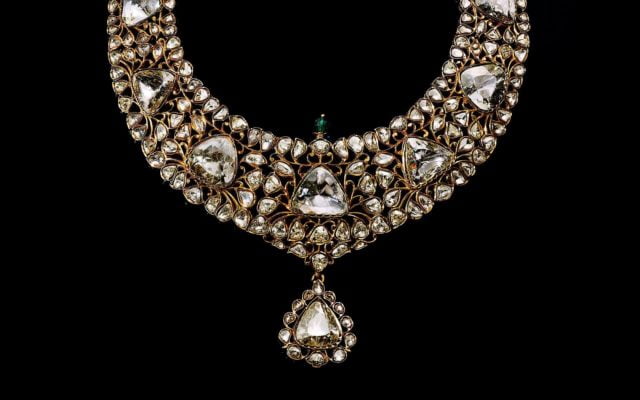 These pieces surely spread more awareness about the vast and rich history of India and create intrigue about them. Sad part is that we, Indians don’t own them as of now, inspite being a part of your grand culture, history and past.

The high price for which these pieces went also show how people want history and value over just expensive jewels.