Home Lifestyle Who Is This Elusive/Mysterious Street-Artist ‘Banksy’ Who Did Something Crazy That Looks... 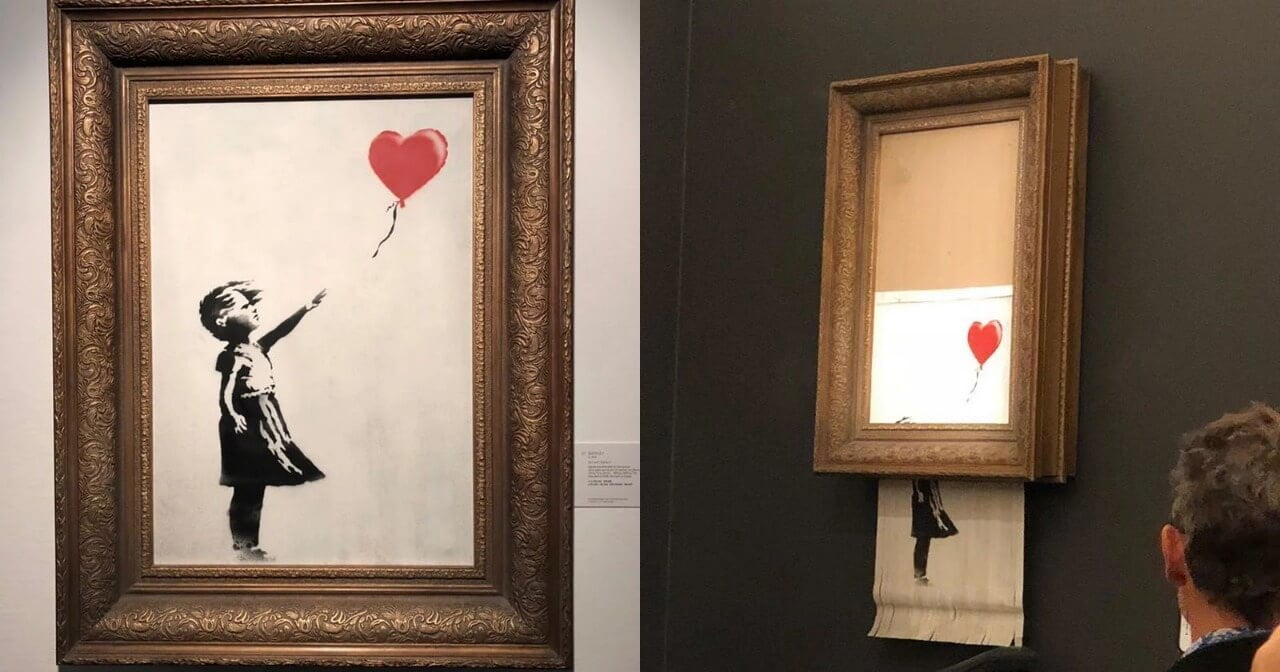 Artists are often known for certain signature styles that sets their paintings apart from the rest, but what Banksy did at the auction of one of his paintings truly left the art world shocked.

Last Friday, a stencil spray painting of ‘Girl With Red Balloon’, perhaps one of Banksy’s most iconic works was up for auction at Sotheby’s, arguably one of the most renowned auction house in London.

But in a shocking and never-before-seen move, as soon as the hammer went down for the final time, the painting went through a shredder that was pre-installed within the frame and cut half of the painting into thin strips.

The painting that was created in 2006, showed a young girl with her hand outstretched towards a red heart-shaped balloon that seems to be blown away by the wind.

The frenzy was even heightened when you realise that the painting was sold for a whooping £1.042m and many are actually impressed with the artist calling this one of the ‘most audacious pranks in art history’.

Bansky has already commented on this whole thing on his Instagram with a cheeky caption of “Going, going, gone…”

While some are taking this as a stand against capitalism, putting a price over art and other social issues, others believe that this is an excellent marketing strategy that has just increased the value of the artwork by a lot.

Apparently, the whole spectacle has made people in the art world even more curious about this painting.

And since the strips are wide enough that they can be glued back with each other and the painting restored, the painting can once again be sold for an even higher price, with some estimates placing it at a value of almost $2 million.

But who exactly is this elusive and mysterious street-artist Banksy who did something that looks right out of a thriller movie. 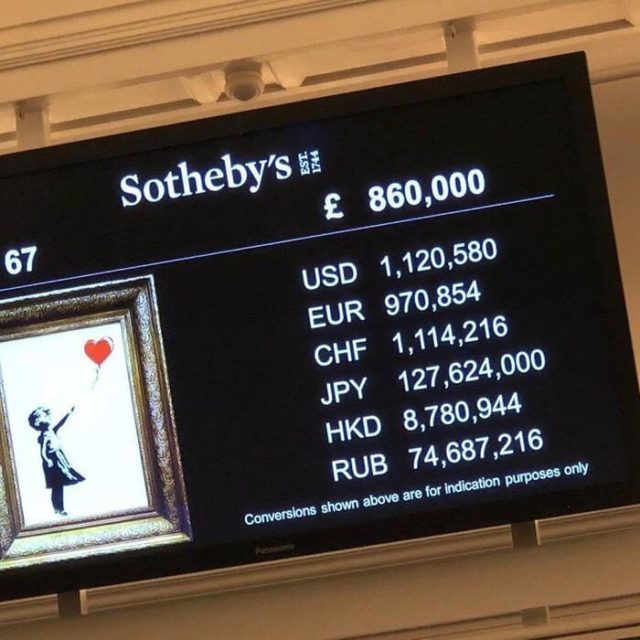 Banksy, a street artist from Bristol in England, has been creating controversy with his art for close to a decade now.

Banksy’s initial popularity came from his anonymous identity and bold, politically subversive graffiti pieces that he painted across his country.

His identity is perhaps one of the best kept secrets, and although it was speculated in 2008 that Banksy is someone called Robin Gunningham, another Bristol native who had been involved in street art after dropping out of school at the age of 16, it was denied by both Banksy and Gunningham.

Known for being a political activist, his drawings are centred around social and political themes with them having hints of dark and satirical humour. Most of his artwork is done on public walls and areas where the public can easily find them.

This is not the first time Banksy has pranked the art world, when back in 2005, he had put up of his ‘modified canvases’ that presented a beautiful 19-century woman wearing a gas mask from the 20th century.

The piece was put up for 2 hours in the iconic Metropolitan Museum of Art in New York and was noted down as one of the many pranks he had played in his best-selling book “Wall and Piece.”

In another show of his dark humour, he apparently put an inflatable doll dressed as a Guantánamo Bay prisoner in Disneyland, a place that is visited by thousands of young children and is considered one of the ‘happiest places in the world’.

His 2015 pop-up “bemusement park” called Dismaland also got a lot of attention which was an imagining of Disneyland but was stated to be a “family theme park unsuitable for children”.

The park was filled with dark imagery like a distorted mermaid, a shoddy and broken down fairy castle, a pond of boats filled with migrants and more.

Banksy commented on his park by saying that, “A dead princess is only complete when surrounded by gawping crowds with their cameras out, or the opportunity to photograph yourself pulling an amazed expression when a killer whale leaps from a toilet.”

Within 5 weeks, the exhibit/park was taken down with its website stating that all the material used for the pieces will be sent to Calais refugee camp “to build shelters.”

The painting destroyed at the auction, Girl With Balloon, was painted in 2017 on a wall in London’s Great Eastern Street and was also voted as the nation’s favourite artwork.

Banksy has been called the king of street art meaning since a lot of his paintings hold deep connotations behind them relevant to the current wrongdoings in the society.

For this stunt, the artist stated Pablo Picasso as his inspiration since Picasso once said that a painting was “a sum of destructions.”