Meet Saalumarada Thimmakka, the 110-year-old environmentalist from Karnataka who is a real-life embodiment of mother nature.

Thimmakka’s love and dedication towards planting trees and keeping them nurtured deserves immense appreciation and is what has brought her to everyone’s attention.

Thimmakka is called the ‘mother of trees’ by people owing to her history of planting trees and caring for them like her own children.

With the help of her husband Bikkala Chikkayya, she has planted nearly 400 banyan trees near her home on a four-kilometer stretch of land, on the highway.

Apart from the banyan trees, she has planted more than 8000 other trees as well. Planting 8000 might seem hectic, but to Thimmakka, it was not a task but an action out of gentle love.

Her Journey To Becoming An Environmentalist

Thimmakka had gotten married to Bikkala Chikkayya at the age of 12. Chikkayya lived in Hulikal village which is located in the Magadi taluk of Ramanagara district of Karnataka.

Even though they led a comfortable and content life, they failed to conceive even after several attempts. So true to the nature of our society, criticisms and judgemental remarks started pouring in from her in-laws and family, leading to Thimmakka going under depression.

Read More: How A Chinese Village Abandoned By People Got Taken Over By Nature And Became A Famous Tourist Hotspot

Even though her husband had her back, people started suggesting prayers and rituals to make her pregnancy possible. As a part of performing one of those rituals, Thimmakka and Chikkayya planted banyan trees.

But what started as a ritual, ended up becoming her solace. The relationship of motherhood that grew between her and the saplings proved to be stronger than the judgemental society she was surrounded with.

Thus started her journey as an environmentalist.

Environmentalists around the country and the world started recognising and acknowledging her work as the news of her planting 8000 trees and more spread.

BBC listed her as one of the 100 influential and inspirational women in their 2016 edition.

She has also been honored with the Padma Shri Award in 2019. In the ceremony, after receiving the award, she went ahead and put her hand on President Ram Nath Kovind’s head as a gesture of blessing. It showed how full of love Thimmakka is.

The President had later tweeted saying, “It is the President’s privilege to honour India’s best and most deserving. But today I was deeply touched when Saalumarada Thimmakka, an environmentalist from Karnataka, and at 107 the oldest Padma awardee this year, thought it fit to bless me.”

The list of accolades doesn’t end here as she has been also awarded the National Citizen’s Award, Veerachakra Prashasthi Award, Karnataka Kalpavalli Award, Godfrey Phillips Bravery Award and many more, as a way of honoring her hard work. 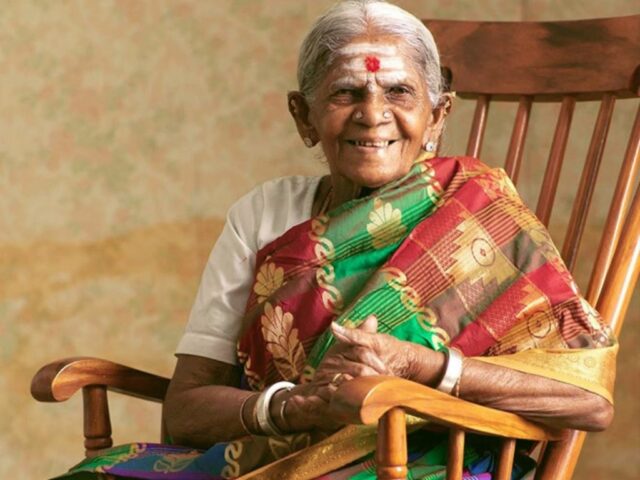 The word ‘Saalumarada’ means ‘rows of trees’ and evidently, she truly justifies it.