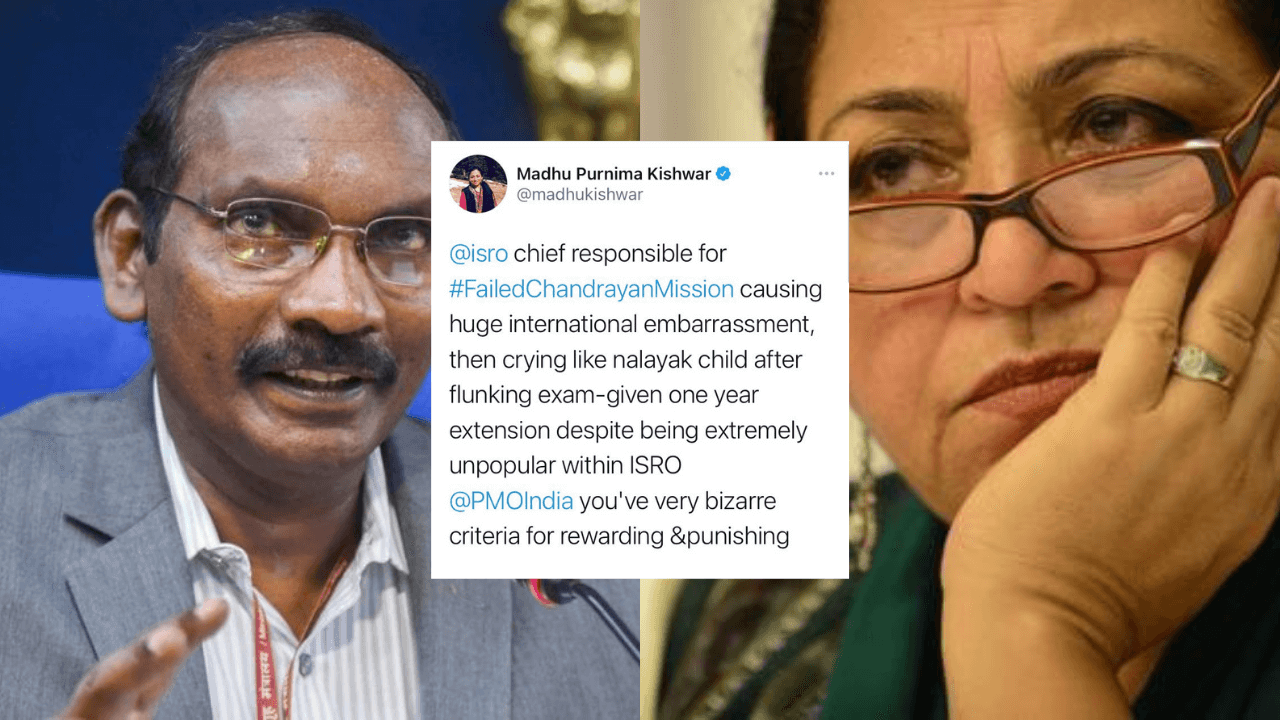 Madhu Kishwar, an Indian academic, writer, human rights activist, and the founder of the famous journal ‘Manushi’, was bashed on social media today for her tweet regarding the ISRO chief.

ISRO chairman K Sivan was granted a one-year extension by the Appointments Committee of the Cabinet. Sivan’s superannuation was due on January 14, 2021, but now he will continue as the chairman till January 14, 2022. 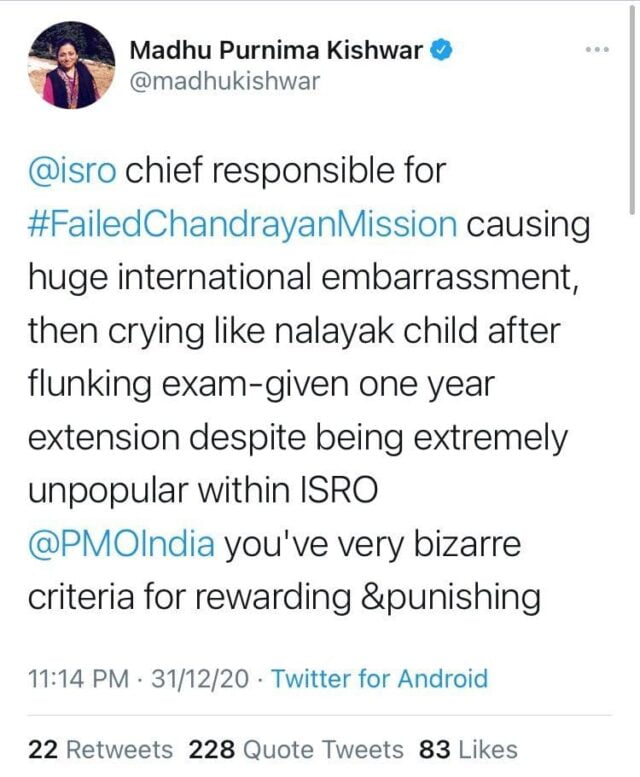 Minutes later, the Twitter community overflowed the platform with tweets supporting ISRO and Sivan. Kishwar was shamed for her tweet and received a lot of negative responses.

ISRO introduced Chandrayaan 2 as “a highly complex mission, which represents a significant technological leap compared to the previous missions of ISRO, which brought together an Orbiter, Lander, and Rover with the goal of exploring the south pole of the Moon. This is a unique mission which aims at studying not just one area of the Moon but all the areas combining the exosphere, the surface as well as the sub-surface of the moon in a single mission.”

India’s second mission to the moon, Chandrayaan-2, was launched in 2019, ten years later after its first mission Chandrayaan-1 that helped confirm the presence of hydroxyl on the moon.

During the final step on September 6, the moon landing, the scientists lost contact with Vikram moon lander just 2.1 km from the lunar surface and the mission ended with a crash-landing.

Officials have not been able to connect with the lander since.

Even though the lander could not land perfectly, ISRO gave a report stating that all the instruments onboard the orbiter were in perfect condition. In October, ISRO even released photos taken by the orbiter of a crater seen near the lunar south pole.

Many scientists and ISRO itself believes that this mission cannot be called a ‘failure’.

Also Read: Why ISRO’s Chandrayaan-2 Setback Is A Defining Success Story For India

Sivan, The Rocketman Of India

Madhu, who has been slammed before on Twitter for making degrading remarks on actress Rhea Chakraborty, was compelled to delete her tweet after the citizens proudly supported ISRO. Nevertheless, she continued to stand by her statement with other few tweets later for which she was criticized again. 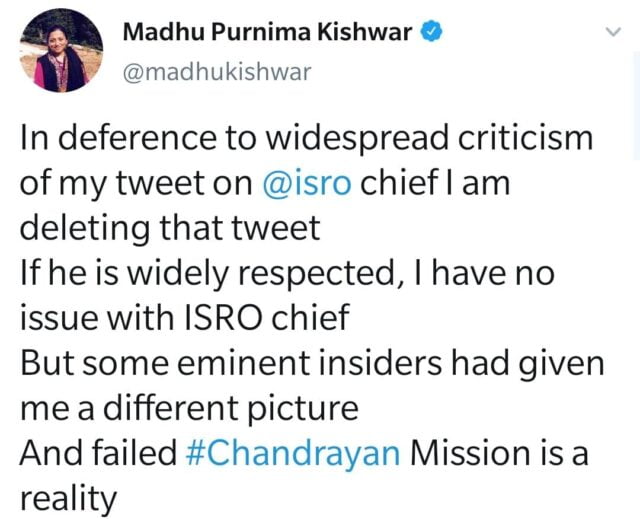 Chandrayaan-2 was an extremely complex mission attempted by India’s space organization. According to Sivan, the mission was 98% successful according to the findings of the official committee.

The success or failure of Chandrayaan-2 has been a topic for debate as the main goal of landing the rover on the Moon failed but the other phases were completely successful.

Nevertheless, this does not mean that the mission caused any embarrassment as claimed by Kishwar. For most of the Indians, it was a proud and emotional moment.

Not to mention that failures are a part of life, and to be able to go through with such a complex mission with 98% accuracy is a big deal.

Contrary to the statement given by Kishwer, most of the current and former ISRO scientists have shown their support for the chairman and said that it is unfair to call the mission a failure.

In a report, an ISRO scientist told BBC Hindi that the success of a space mission has to be measured in terms of “the returns you get”.

He continued by saying, “We had a precise launch, the orbiter was maneuvered as anticipated which is a major part of the success and even the lander passed through all the three phases except that in the last phase it did not function as per our expectations”.

The data from the orbiter is still reliable.

Dr. Madhavan Nair, former chairman of ISRO, said, “only a small portion of the mission” had failed, and although the lander had not made a soft landing, it had lost contact “very close to the surface of the moon.”

Dr. Sivan also told The Hindu newspaper, “By December 2021, the first Indian will be carried [into space] by our own rocket. ISRO is working on that”.

Here is how people reacted to Kishwar’s tweets: 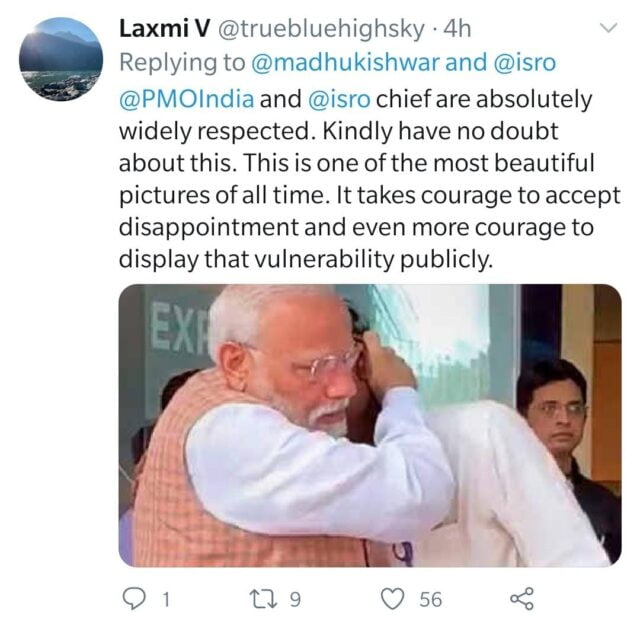 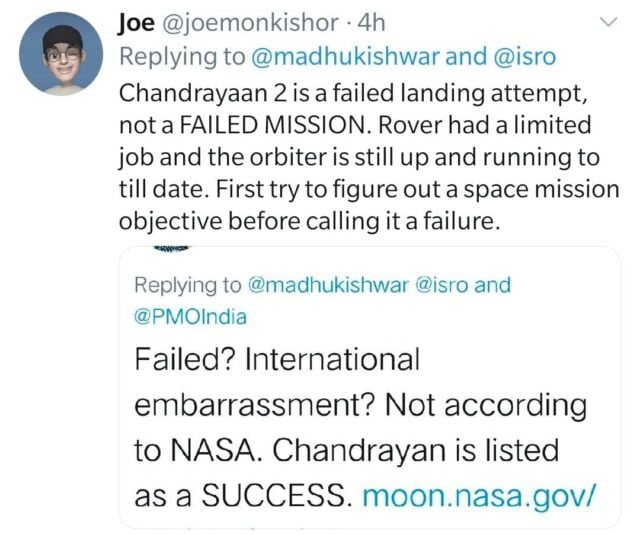 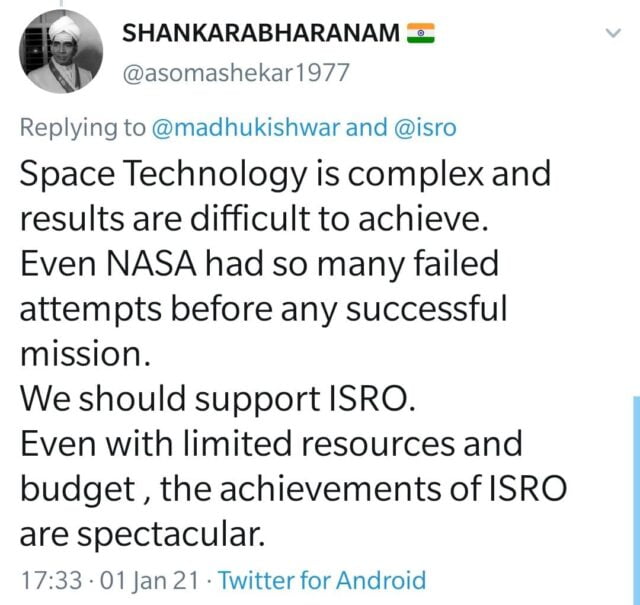 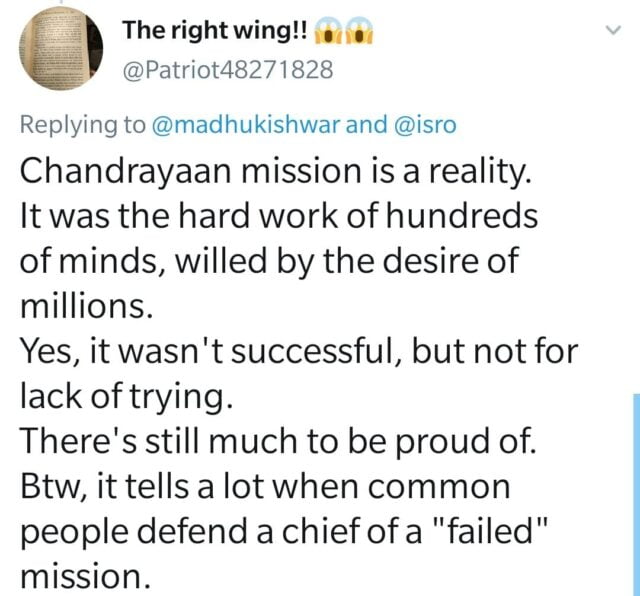 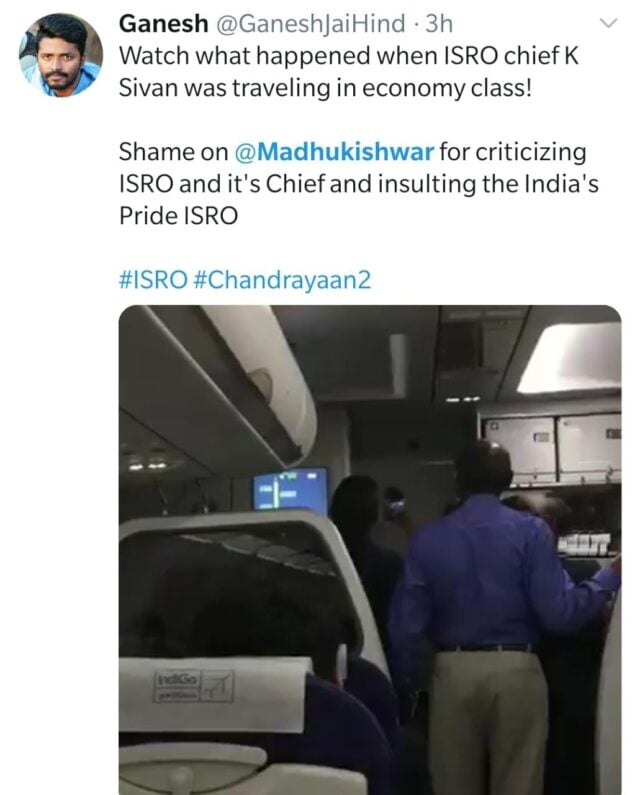 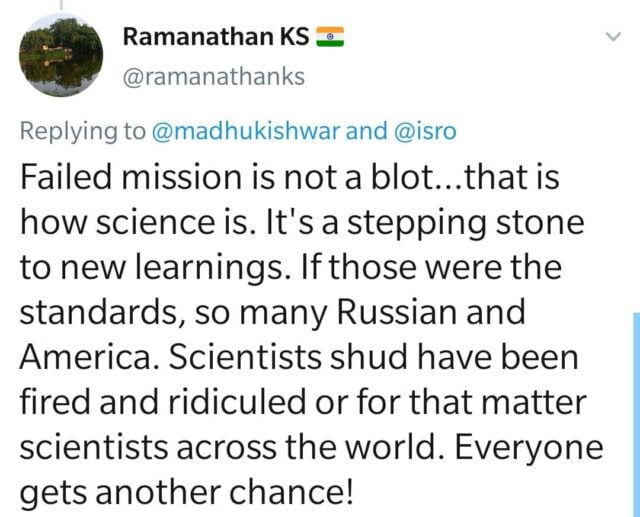 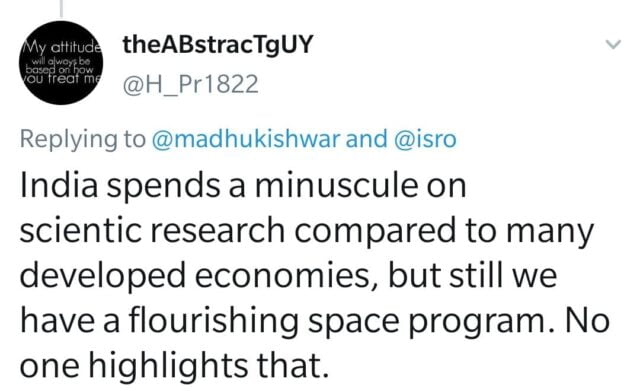 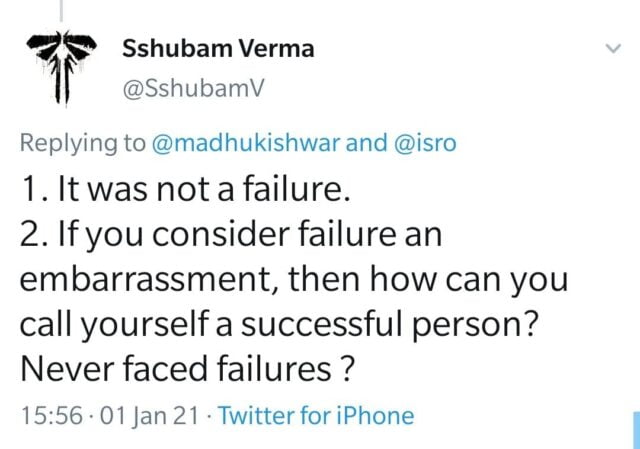 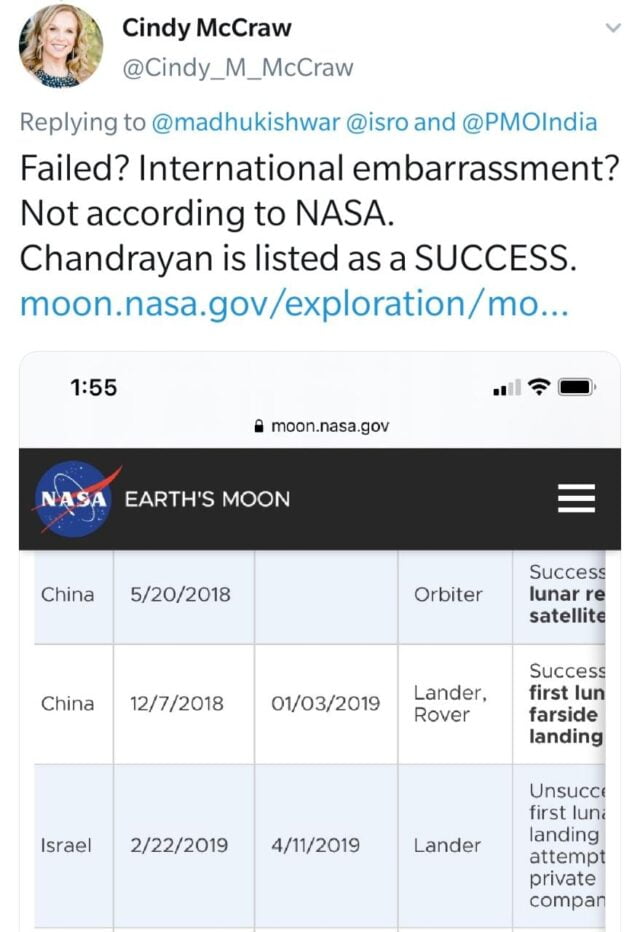 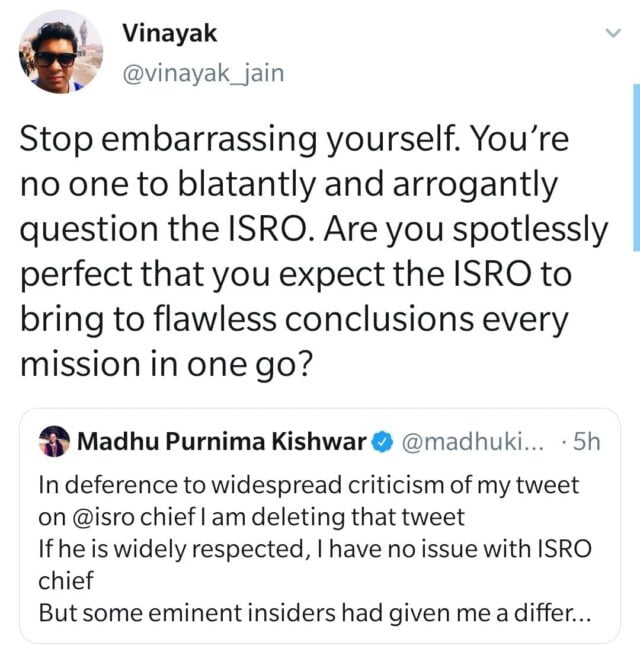 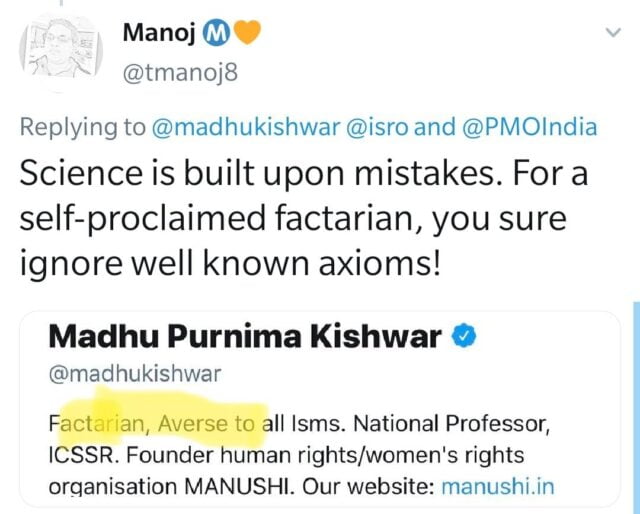 Twitter Asked People To Roast 2020, Here’s How They Responded