As the number of people infected by the COVID-19 is growing at a swift pace, ground-level work has been started in the country to contain the transmission of the virus as much as possible.

Testimony to the efforts being laid by the authorities is the indigenously prepared disinfectant tunnel of Tiruppur district of Tamil Nadu. The tunnel is set in the Thennampalayam vegetable market in Tiruppur.

What Authorities Have To Say

The District Collector of Tiruppur remarked that washing hands followed by passing through the tunnel is obligatory for everyone before entering the market. This concept further complements the strategic plan to contain the virus in the state which has already confirmed 730+ cases as of now.

Inside the tunnel, there is a sprayer placed overhead that sprinkles the disinfectant and sanitizes the person going through it. This process minimizes the risk of community spread of the virus.

As per the information provided by the District Collector of Tiruppur, the solution being used as the disinfectant is 1 per cent Sodium Hypochlorite.

The dilution rate is one part per million (ppm) which is a permissible limit under the guidelines laid by the World Health Organisation (WHO). Before declaring the tunnel a socially usable commodity, it was thoroughly tested and reviewed by a team of doctors who declared it safe.

The Collector also mentioned that the tunnel must not be deemed as a substitute for other preventive measures like hand washing, wearing a face mask and ensuring social distancing between people in the market. Instead, it is just another inclusion in the plan of shielding the area from the outbreak.

Also Read: Flipped: Our Bloggers Argue Whether Lockdown In India Should Be Extended Or Not?

The idea behind this tunnel was formulated by Mr Kathiresh, Managing Director of Carona Knitwear, Tiruppur and former Chairperson of Young Indians chapter there, a non-profit entity with the Confederation of Indian Industry (CII).

The idea was later presented to the administration which calibrated it and finally, the tunnel was set up in the decided place in the district.

The installation of one such tunnel costs somewhere around 85 thousand to 1 lakh rupees and it takes 2-4 days in building it. According to a report by the Deccan Herald, the tunnel consumes 50 litres of the disinfectant solution in an hour and can operate for 16 hours at a stretch. 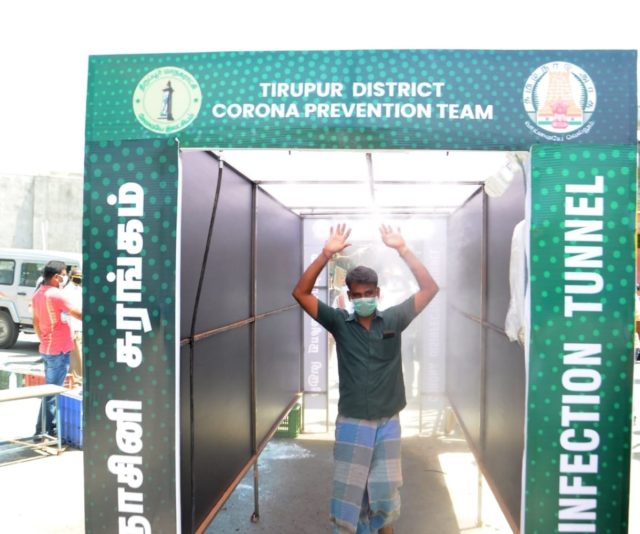 Idea To Be Carried Forward

The district administration of Tiruppur has marked 8 to 10 more places to establish such tunnels. In some instances, the tunnel can also be used to sanitize the vehicles passing through. This is probably the first time that such a tunnel has been installed in India.

After Tiruppur, other cities like Salem, Erode, Thoothukudi, Hubli, etc., are also in the queue to witness the installation of such disinfectant tunnels.

A disinfectant tunnel has recently been installed in Noida, a city in Uttar Pradesh, and gradually this idea is getting attention and implementation in other parts of the country as well.

The blueprint and project reports of the disinfectant tunnel have been submitted to the national governing body of Young Indians. So, it is likely that the action to build more of such tunnels in the big, metro cities like Mumbai and Delhi, where the virus is proliferating each day, is soon to be carried out.

The disinfectant tunnel does not remove the virus inside the body but acts as a tool to wipe off any that might be present on the clothes or body of a person which may pose a threat of community spread.

So, in these tough times when authorities are racking their brains to develop effective methods to control the outbreak, the innovative plan of disinfectant tunnel is highly appreciable and a welcome move.

In Pics: Things You Need To Stop Doing In Quarantine