Every year since 2006, literature enthusiasts and book lovers from all around the world gather for the biggest celebration of literature on the planet and to make the society realise its importance not only in their own lives but in others as well. Such celebration takes place at the pink city of India every year, luring a humongous amount of both Indian and foreign audiences. This celebration is called the Jaipur Literature Festival. It is the mecca for all the book lovers out there and an accolade for the writers who come to share their experiences and opinions about wide range of subjects and issues. Essentially, people come to the festival to celebrate the glory of literature in the modern world.

I had been desiring to attend the festival from the time I realised of its occurrence but was not allowed to go because of my board exams (oh, the poor state of small children) but grabbed the first chance, I got to attend the festival, in my college life, with both hands. The following is thus my (a literature enthusiast’s) experience of a day at The Jaipur Literature Festival 2015.

Writing the family at the Durbar Hall

Our arrival at the Hotel Diggi Palace marked my rushing (as it was already 11 a.m., thanks to my fellow companions) towards the fascinating Durbar Hall (with these beautiful carvings), where three of my (going to be) favourite writers were waiting for me (not exactly). The topic of the discussion was writing the family: about the difficulties writers face while writing stories inspired by their families and turning them into best sellers. Akhil Sharma, writer of the bestseller, Family Life, said, a virtuous is the book which portrays the perceptions of all the characters effortlessly, while Mira Jacob, writer of the critically acclaimed, A Sleepwalker’s Guide to Dancing, emphasised that if the protagonist is too strong of a character in himself, his should be the narrative and the point of view.

Maria Chaudhari, writer of Beloved Strangers, remembered of the instance where her mother stopped a family discussion as she entered the room, supposing that she would turn the discussion into a story and make her mother look cruel to others. Such were the dilemmas of the writers writing about their families. How old is she?

The next session was the one I had gone to the festival for, to meet my favourite writer and the winner of the Man Booker Prize 2013 winning novel The Luminaries, Eleanor Catton. It was wondrous to see her sitting just a few feet away from me and reading me (us) excerpts from the book (which she said took her 6 months to write). As she was reading the first few pages from the 832 pages long book, and I reading along with her in my copy, a man sitting next to me asked me in broken English about her age. I replied 28(though she is 30 now but was 28 when she won the prize) and the man was lost in marvel. And he should indeed have been, because writing such a long book and that too with around 12 protagonists was not at all an easy task.

“I like writing about the times, important for the mankind but which have been forgotten by the people and mixing superior fiction with them”, said she. My dream came true after meeting her. This was the main purpose of the festival, gathering the authors and their fans at one place so that they interact with each other to feel the realm of thoughts. It makes you feel in a way you never thought you could have ever experienced. The Writer VS the World.

After wasting my money on the highly expensive food available at the venue and coming back to the front lawns, I realized that there was not enough space to even stand properly. But as I looked up at the stage, I got the reason of the human ocean. Coming from the other side of the world (literally) was the Nobel Laureate V.S. Naipaul. Not being able to hold his own mic and being on a wheelchair, the writer (now an aged man) was forgetting things. But his books were the ones which his readers still remembered and had come from all around the world just to get a glimpse of him. Mr. Jethmalani, lawyer at the Supreme Court of India, also came to attend his session. Mr. Naipaul was so astounded to see his audience that he cried a few tears of joy. The times had changed but his readers’ love for him remained the same. The audience continued to stay at the front lawns and after some time I heard a man speaking in Tamil accent and using the word ‘okay’ enormous number of times. The person speaking was none other than the most beloved of the Indian presidents, Dr. APJ Abdul Kalam. The audience cheered for him as if some rock-star had arrived and why wouldn’t we? He is the greatest motivator for the Indian Youth. He told of his vision about the future of India and ordered us many times to repeat after him, “I will fly; I will fly; I will fly; as I am not born to crawl.”  He talked of an instance where he was rejected from the Indian Air Force, being ranked No. 10, from hundred men, while only 9 were to be selected. But he persevered and later himself became, The Marshal of the Indian Air Force, after becoming the president. He demanded us, the youth, to always persist and work hard. As soon as the last session ended, the human wave relaxed, expanding to the different areas of the venue, some sat at Baithak, discussing how their day went, while others rushed to the food stalls to grab their evening snacks, but I went straight to the book shop there where I found all the artistic jewels. Before entering the shop, I noticed that there was a small tree growing outside the book shop whose branches grew letters instead of fruits. Letters by the visitors of the festival.

“If I had to choose one word to describe my day at this festival, it would be whimsical. My imaginations took form today.

Today I realised how simple moments of family life mean a lot in adulthood.

Today I met the one person whom I thought I would never be able to meet in my life.

Today I understood that even no matter how old a man becomes, his creations would always be young in the minds of his admirers.

And today, I recognised that one should always persevere in order to succeed in his life.

I learnt very much in one day and this awareness I will take back with me, wherever I go, always.

Had a magnificent day today.”

This was my fruit to that tree. 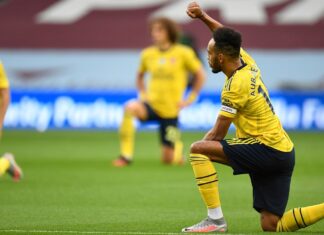 Shouvonik Bose - July 30, 2021
There are many instances of racism creeping into football and the impacts of it are far and wide across the world.  Instances Going to dates as...