Home Politics Is Donald Trump Getting The Nobel Peace Prize For Making Peace With... 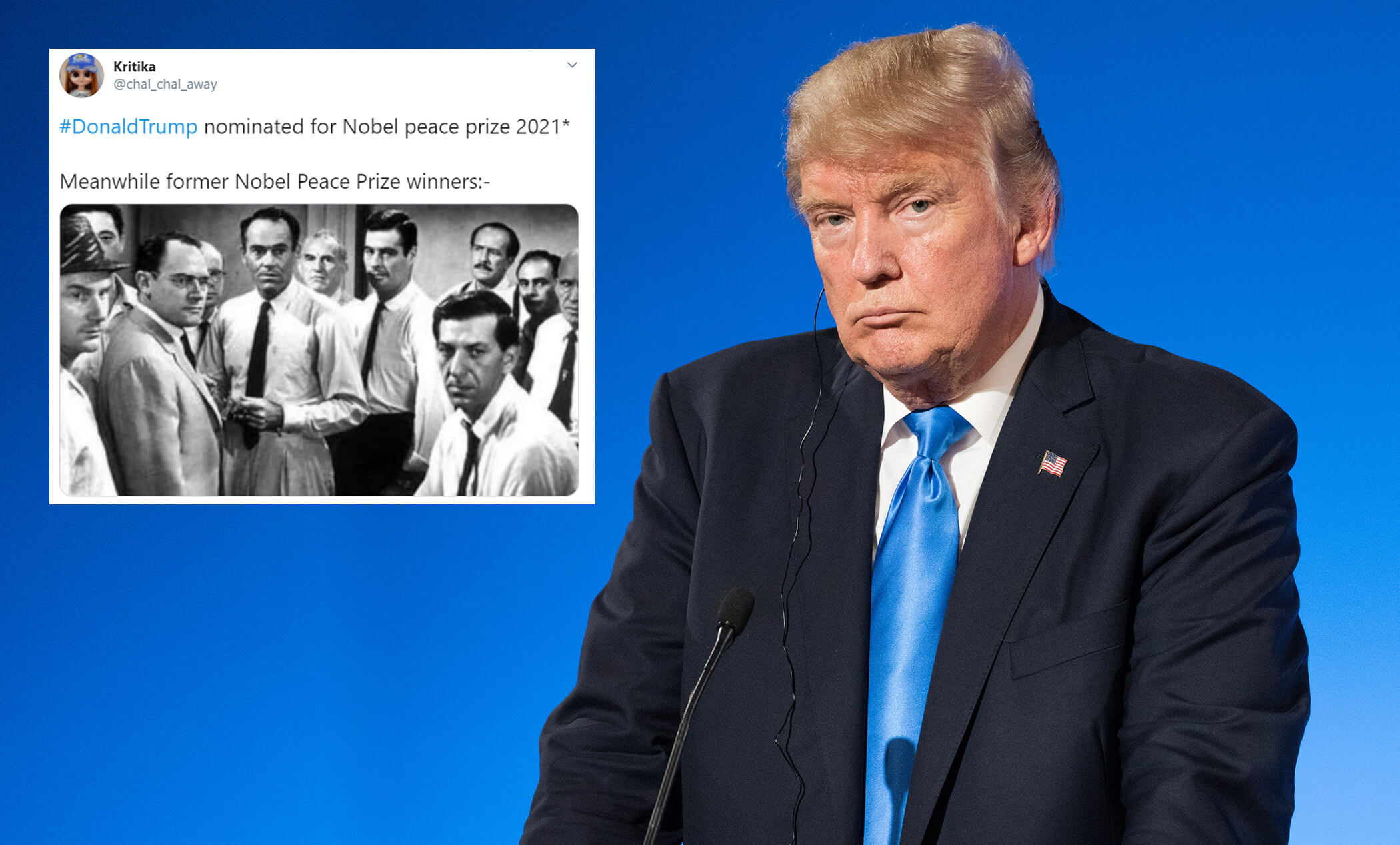 In a move that no one saw coming, news came out that US President, Mr. Donald Trump had recently been nominated for the Nobel Peace Prize.

This news comes just two months before the US Presidential elections, one that is not looking good for Trump, majorly due to how he has been handling the coronavirus pandemic in his country.

Reports state that a far-right Norwegian politician apparently nominated Trump’s name mainly because of his support work for a peace deal between Israel and the United Arab Emirates.

Christian Tybring-Gjedde, a member of the right-wing Progress Party in Norway, stated that “It is for his contribution for peace between Israel and the UAE. It is a unique deal.”

He also supposedly told Fox News that, “For his merit, I think he has done more trying to create peace between nations than most other peace prize nominees.”

This is not the first time Trump has been nominated by Tybring-Gjedde, he had also done the same in 2019 due to his diplomatic efforts with North Korea.

One also must know that nominating a person for a Nobel Peace Prize is not really that difficult. Names of politicians such as heads of state or those serving at a national level are automatically accepted.

People like university professors, directors of foreign policy institutes, past recipients of a Nobel Prize and members of the Norwegian Nobel Committee can all submit nominees for this prize. There is also no invitation needed to nominate someone and as long as their name is submitted by February 1st of the qualifying year, they will be instantly entered into the race.

It is no shock that Trump is certainly not an individual very much liked by certain people.

However, here are 10 reasons why he definitely, absolutely should be getting this Nobel Peace Prize because he deserves it for all the AMAZING work he has done till now.

(Hope everyone can understand the heavy sarcasm here)

Since the beginning of the spread of COVID-19 across the globe sometime around March, Trump has consistently been dismissing the virus as nothing major.

He had played down the death rate, boasted about how many people they have tested and given some very concerning and downright harmful statements on how to treat the disease.

Everything that when called out on, he very easily went back on and denied ever saying.

Who can forget the heroic move of building a wall around the Mexico border to keep out the wrong people from entering America?

Of course, the wall is now built (not) and was totally paid by the Mexican government (not) adding another shining medal to Trump’s presidency.

Yes, making peace (not) with his wife Melania Trump should obviously get him the peace prize.

Trump is not above attacking any person who speaks out against him, no matter their age, seniority, or even if they are dead.

Previously, Trump had attacked former senator John McCain long after his death and last year he had apparently suggested that late representative John Dingell was in hell when he said that he would be “looking up” from hell.

5. Almost Put The US In Another World War

Trump’s decision for the US military to carry out an airstrike on five facilities in Iraq and Syria and killing Qasem Soleimani, the Iranian Quds Force commander almost brought the country on the brink of another World War.

Trump’s endless support and bias towards Judge Kavanaugh even during his trial was certainly praiseworthy. :/

Who can forget the unending pearls of wisdom that Trump leaves on his Twitter page?

His recent actions against the Postal Service, like refusing more aid, and others, just to create an obstacle for mail-in voting are clearly the actions of someone who deserves a peace prize.

Time and again, Trump has encouraged protests, like when he supported the people who were against COVID-19 lockdown, putting themselves and others at risk.

10. Threatened To Stop Funding States If They Kept COVID-19 Testing

There were even reports that Trump had threatened states that the federal government would stop funding them if they kept on doing COVID-19 testing in those areas.

Besides all this, the very news of something like this happening had social media roaring with laughter and resorting to their only way of letting out their feelings, through making memes. 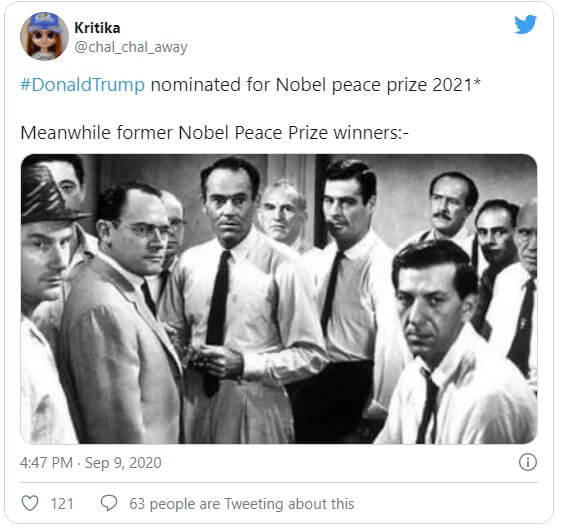 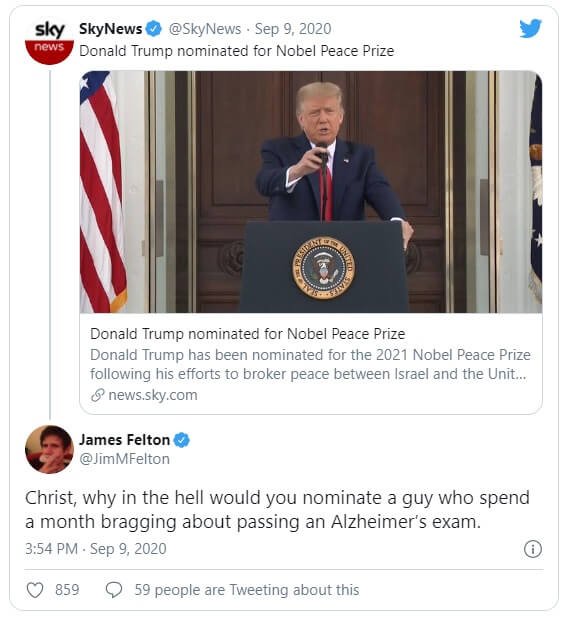 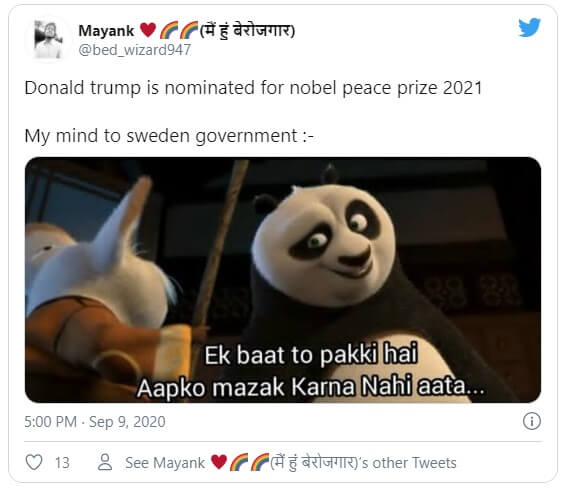 Donald Trump and NOMINATION for a Nobel Peace Prize?!?!?!

What's next? North Korea winning the physics prize for the nuclear weapons?

Wake me up when its 2021 and the world makes sense again #ImOut #NobelPrize #NobelPeacePrize pic.twitter.com/mtxzpZB9Fk

One has to wonder what exactly made someone nominate Trump of all people for a peace prize of all things.