It is a known fact that almost 50 percent of first marriages, 60 percent of second marriages, and 73 percent of third marriages end up in a divorce. Divorces are common and a much more respectful option than staying in a toxic relationship.

However, the stigma around divorce in certain communities is so strong that even in a country like the United States, where, on average, about 40 to 50 percent of married couples end up in divorce, the immigrant community of South Asian Americans has a significantly lower divorce rate.

The South Asian community considers this low rate of divorce a matter of immense pride, but the reason behind such low rates than the rest of America is not due to more cases of a healthy, conducive relationship than the others but as Parijat Deshpande, a clinically trained therapist, calls it “invisible divorce.”

What Is Invisible Divorce?

Invisible divorce is a tortured cohabitation of a couple in a relationship that has irrevocably fallen apart.

In simple words, an invisible divorce is a situation wherein even when a couple is legally married, the partners no longer share the emotional or physical intimacy as they once did, their lives tend to proceed in parallel with one another, resembling the relationship between co-workers or roommates.

Couples belonging to the community of South Asian Americans prefer to not get legally separated due to cultural and financial reasons, or for the sake of their children.

Also Read: Indians Are Now Monetizing And Earning Money From Their Own Weddings

According to Pew Research Center, 64 percent of Indian Americans say having a successful marriage is one of the most important things in their life, compared to just 34 percent of all Americans.

Hence, for an individual of South Asian descent, a successful marriage is one of the most important things in life and the heavyweight stigma around divorce takes away their self-determination even when they are in a toxic-abusive relationship.

The mere thought of divorce is enough to bring the fear of ostracisation from the community and victim-blaming in the mind of a couple.

Many times, the couple chooses to continue with the relationship for the sake of their children too, failing to recognize that a toxic relationship between parents does more harm than good for the children.

In South Asian communities, the womenfolk are often financially dependent on their husbands. The taboo related to divorce has particularly severe consequences for women who have no financial resources of their own.

In many cases, the families of the women do not support them in their decision of divorce, and thus, they are forced to stay in their relationships. If they do otherwise, they are left with no place to go and no means of supporting themselves and their children.

Therefore, many South Asian women prefer to live separate lives from their partners, but choose not to legally get divorced, in a case of an unhealthy marriage, as there are many advantages to staying married including, social, emotional, and economic ones.

For a woman, immigration, class, gender, religion, and intergenerational status, along with culture intersect in the aftermath of a divorce making life difficult for her and her children.

To fix this problem, the South Asian community must rethink the institution of marriage and the emphasis it puts on it so that individuals can be more independent and self-determinate in their choices.


Why Do Indian Parents Have So Much Trouble Letting Go Of Their Kids? 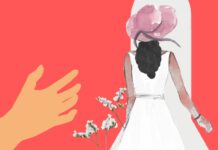