Home Entertainment I Can’t Stand ‘Mohabbatein’ One Bit: Hope It Shows In My Rants... 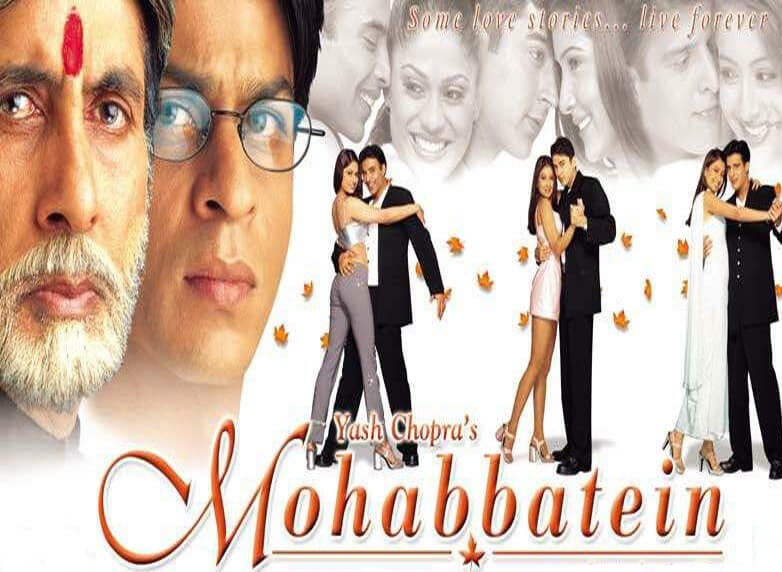 I remember the year 2000 very vividly.

It was the year right after 1999, a few months after all the world-ending, rabble-rousing Y2K hysteria had died down.

Back then, Hrithik Roshan was all the craze. Not because his KNPH was such a great film (although, admittedly it was a blockbuster) but, because everyone was like, “Man, that guy can dance!”

Until then, the best dancer in Bollywood was Govinda, red shirt and yellow pants et al. Mohabbatein (which released the same year) however, was the antithesis of Kaho Na…. Pyaar Hai.

Uncool, in a self-serious and often pedantic way, Mohabbatein was well, dull.

Welcome to Gurukul, not! Mohabbatein begins with three guys with the collective personality and charisma of a blunt HB pencil arriving at a train station where the old station master carries the old oil lamp from Sholay.

Together Uday Chopra, Jugal Hansraj (Don’t sweat it. I hardly remember him as well) and Jimmy Shergill make their way to Gurukul, apparently the best university in India.

Read More: We Need To Talk About How Filmmakers Portray A Strong-Headed Woman a.k.a The B*tch

Now there are a lot, a lot of things wrong with Mohabbatein. First of all, do a good job of selling an elite British University as an Indian one. And, gladly take a finger from all those kids who told their parents, “Papa Gurukul mein padhna hai.”

Secondly, I know Mr. Uday Chopra, well-known film producer and sidekick to Robin (Batman wala) Bachchan of the Dhoom series is your brother but, Mr. Adi Chopra, did you really not find a better film to launch your sibling in the film industry.

I mean, is that how much you hate your own brother?

To be fair, in retrospect any film with Uday Chopra was guaranteed to be a disaster. Even more so in a film where all does is hop like Bugs Bunny on steroids and harass poor Shamita Shetty (that’s Section 354 of the Indian Penal Code, Mr. Chopra).

Add Jugal Hansraj to the mix and….. Oh, you don’t remember him, right?

Nevermind then. And then there is Jimmy Shergill, a rare actor who made it out of this trainwreck to do great roles in Saheb, Biwi aur Gangster and Tanu Weds Manu.

Little did we know then. And boy, are we thankful for him.

And some more trolling….

The story is classic Bollywood, so-so but honestly, not particularly bad even if it is very melodramatic and predictable. The problem lies with the dialogues and yes, they are really terrible.

From cheesy pickup lines, courtesy Uday Chopra (he dated Nargis Fakhri. So, do they work? Really?) to lower-lip bursting, pedantic and anti-climactic monologues by each of the main protagonists, Mohabbatein is the film version of the Sanskaari channel with a couple of teaspoons of gulaab jal.

And it moves so, so slowly that even if you leave mid-way for a buffet at Barbeque Nation only to return later, you wouldn’t have missed much. Probably just another couple of punchlines from Big B or SRK.

Try not to laugh at the acting

Big B and SRK are some of the biggest actors this industry has ever seen. Their commitment to their role is singular and total, and this shows.

No matter how corny or cheesy the line may be, they deliver them with the acutest of lip-trembling and staring.

Oh yes, there is a lot, a lot of staring in here.

And there is Aishwarya Rai too in a role that would have made Demi Moore teary-eyed.

In all honesty, Mohabbatein isn’t as intolerable as I make it sound. The soundtrack remains wonderful to listen to, even after so many years.

In fact, it’s totally bearable and even rather funny (unintentionally, of course), especially when you’re really drunk.

It’s the sort of guilty pleasure you would count a film like Jaani Dushman or Deshdrohi as. Only, this is the Yash Raj version. Much more sophisticated.

Watch it if you haven’t but, do catch it again if your college is nothing like Gurukul or if your music teacher isn’t really adept at organizing boy-girl dance parties.

Reviews Brand Voice - September 23, 2021
The modern woman is quite ambitious, full of aspirations and has no hesitation in choosing her career as her primary focus in her late...