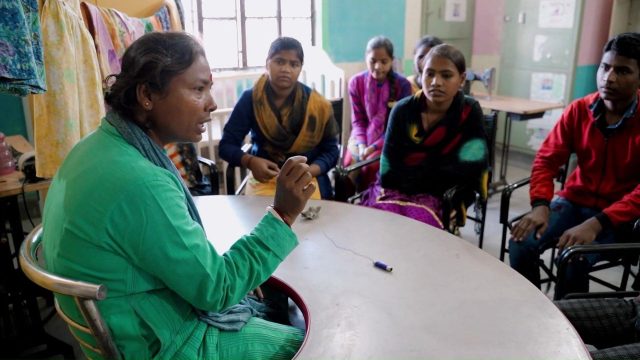 May 3: Ajeet Singh was all of 17 when he first came to the rescue of a sex worker’s children. That was way back in 1988. For almost 25 years, he has dedicated his life to fighting child prostitution, trafficking of women and girls for sex and other second-generation prostitution.

The first significant experience of rescuing child victims of sexual abuse was in 1999 in the Banda district of Uttar Pradesh, when the children’s father was the culprit himself. Many people indulge in sexual exploitation because of supposed traditional practices among a few communities, and for economic reasons. In 2005, a rescue operation in Varanasi’s red-light area was able to free forty-nine women and girls, including minors, from different brothels. Many people were convicted in the case. With these cases, Guria established itself as the pre-eminent nonprofit in Uttar Pradesh working for the victims of sexual exploitation.

While Ajeet and his Varanasi-based organisation have saved over 5000 women and girls from sexual exploitation and slavery, made Varanasi’s red-light area the first child prostitution-free red-light area in India, and fought hundreds of cases in various courts against very powerful people without worrying about his own safety, the going has been challenging for the last two years.

Guria says that funds have been hard to come by because of the pandemic, and keeping the good fight has become increasingly difficult. Ajeet Singh needs your support to continue working and replicate a holistic end-to-end strategy to save and protect sexual exploitation victims, help prosecute traffickers and brothel-keepers and carry out witness protection programmes. In association with GiveIndia, India’s largest

crowdfunding site, Guria has launched a fundraiser soliciting funds from ordinary people to meet its requirements .

Many survivors are grateful for Guria’s support. For instance, Ramala, a Nepali woman from the Varanasi red-light area says, “Sir ji (Ajeet Singh) has continuously been fighting for us, and now we are much safer from the tyranny of pimps, traffickers, brothel-keepers, criminals etc. We were brought as small girls in this hell, but thankfully, there are no younger girls in the flesh trade.”

Guria provides livelihood support for the survivors by training to work in existing businesses, like poultry, farming, tea shop, general store, vegetable vending, taking up new businesses like auto-driving, setting up flour mills, or even training them for government jobs. It also provides vocational training for survivors to become beauticians, nurses, electricians, photographers, caterers, and for other professions.

In order to meet the expenses of Guria, the online crowdfunding website GiveIndia has launched a fundraiser for Guria. The funds raised will meet expenses, for books and stationery for children attending mainstream schools in red light areas, nutritional support, vocational training/livelihood support to at-risk children of the red light areas and vulnerable villages that openly practice prostitution, legal help to fight traffickers and brothel keepers in 21 focused districts and reaching nine states to rescue and awareness activities.

Hundreds of people from across the world are donating to the cause through crowdfunding. You can visit the site and donate to Guria.

GiveIndia exists to alleviate poverty by enabling the world to give. Established in 2000, it is the largest and the most trusted giving platform in India. It enables individuals and organisations to raise and donate funds conveniently to any cause they care about, with offerings including crowdfunding, corporate giving, cause marketing, and philanthropy consulting. GiveIndia’s community of 2M+ donors and 250+ partners have supported 2,500+ verified nonprofits, serving 15M+ people across the country.