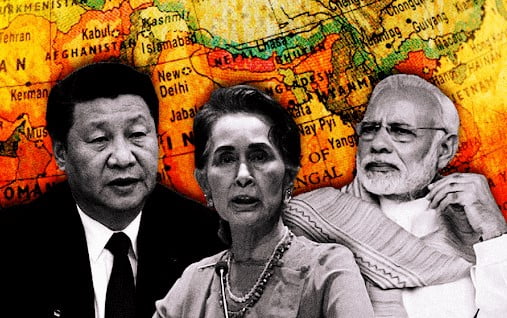 On 5th May 2020, Chinese and Indian military had a violent face-off along the Sino-Indian border, including near the highly controversial Pangong Lake in Ladakh, at the Tibet Autonomous Region and near the Sikkim-Tibet border.

20 Indian soldiers (including an officer) died on 15th and 16th June 2020. The clash took place in total darkness and lasted up to six hours. According to senior Indian military officers, Chinese troops used wooden sticks wrapped in barbed wire and clubs with nails hammered in.

But these constant violent encounters by China makes me wonder why they don’t attack Myanmar and covet its territory as they keep doing so with India.

Even before the 1962 Sino-Indian War, China and India had long-established tension regarding the Line of Actual Control. The line, being very loosely demarcated, has led to regular border “transgressions”.

During independence in 1947, the government of India used the Johnson Line as the basis for its official boundary in the west, which included the Aksai Chin. In 1956–57, China constructed an unauthorised road through Aksai Chin, connecting Xinjiang and Tibet.

Aksai Chin being easily accessible to China has always been in controversy. Its access from India, which meant negotiating the Karakoram mountains (a range extending to Afghanistan and Tajikistan, and its highest 15 mountains are all based in Pakistan), was very difficult. The road was published in the 1958 Chinese map. Thus, Aksai Chin has long been taken over by China since 1962.

Pakistan had also surrendered some of its territories to China in 1963.

China and Myanmar apparently have a much closer bilateral relationship with each other, but this is allegedly due to Chinese-sponsored debt-traps and Chinese-backed militants in northern Myanmar territories. China maintains substantial strategic and military cooperation with Myanmar.

Since 1989, China has provided many jet fighters, armoured vehicles and naval vessels and has also trained Burmese army, air force and naval personnel.

China has extensively backed Myanmar in developing industries and infrastructure and intents to be the pivotal beneficiary from growing Myanmar’s oil and natural gas reserves. The trade between China and Myanmar is more than $1.4 billion.

But lately, the relations between China and Myanmar have been rocky because of many ongoing conflicts near their border. Chinese companies based in Myanmar have been heavily accused of illegal land acquisitions and human right violation. There are many reports of residents being thrown out of their own homes to expand Chinese-backed copper mining projects spreading over 8000 acres.

Many instances have occurred where locals were attacked by police and Chinese workers where white phosphorus military munitions were used, resulting in severe burns and injuries to protesters, including monks.

Human trafficking is one of the major problems that Myanmar is suffering due to huge Chinese involvement in their country.

Over 7,000 Burmese women and girls are being involved in sexual slavery in China, where they are sold as “brides”. It has been reported that women are sold multiple times for the purpose of forced childbirth.

China has also been accused of being involved in funding Myanmar’s internal terrorist groups like the Arakan Army and the United Wa State Army (UWSA) with rifles, machine guns and even FN-6 Chinese Manpads which can easily take down helicopters, drones and combat aircraft, thus promoting “Diplo-terrorism” withing their country.

China doesn’t need to attack Myanmar as it does to India. China has infiltrated Myanmar so deeply and has done so many favours to them, they are basically under the Chinese regime.

Even though Myanmar has started to develop strategic and commercial relations with India, it is still very difficult for Myanmar to grow due to China’s firmly established political and economic influence in the country.

China Bans Access To Indian Newspapers And Websites In Retaliation: What From Here?