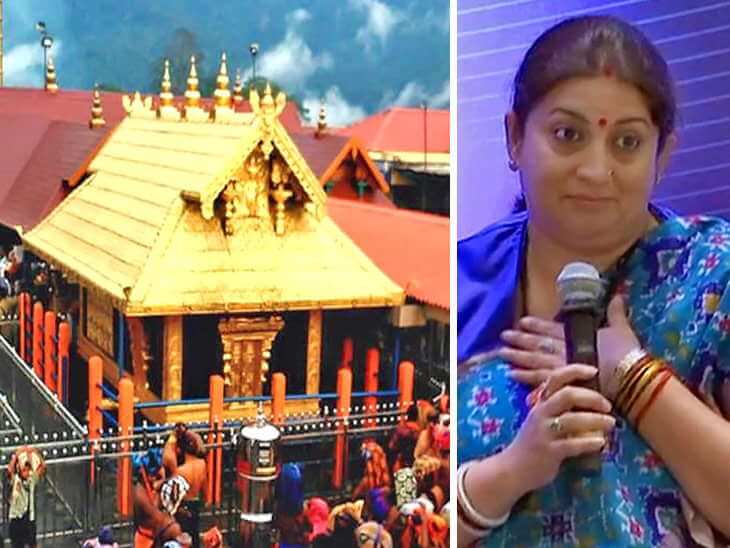 Union Minister Smriti Irani, yesterday in Mumbai attended an event called the “Young Thinkers” conference where she made certain remarks regarding the current Sabarimala Temple issue and menstruation that did not sit well with people.

It was at this event organised by the British High Commission and the Observer Research Foundation that the question about the recent issue with the Sabarimala temple came up.

Recently, the Supreme Court on 28th September allowed females of menstrual age to enter this temple after a long ban, but on October 17th 2018, when the temple gates were to open to all, males and females, huge number of people came out protesting against this, not letting any woman enter the premise.

Females were not allowed inside no matter what, with protesters arguing how it was breaking tradition and would sully the purity of the temple.

Irani, the current Union textile minister, was asked about this issue at the conference where she went on a tirade about how women might have the right to pray but not the right to desecrate.

Here is the full video:

We are in conversation with Union Minister of textiles,Smt Smriti Irani; Moderated by Mr Samir Saran, President, Observer Research Foundation at the #YTC2018

What Happened At The Event?

First of all, Ms. Irani did not even let the moderator finish the question, and then she responded to a person by the name of ‘Vinay’ who had earlier, in an unrecorded part of the conference perhaps asked something on the Sabarimala issue.

To this she stated that,

After she was trolled and attacked for these remarks, she stated in a string of tweets of how this was fake news and that the actual truth was missing.

Fake news …… calling you out on it. Will post my video soon. https://t.co/ZZzJ26KBXa

I respect that stand by the Zoroastrian community / priests and do not approach any court for a right to pray as a mother of 2 Zoroastrian children. Similarly Parsi or non Parsi menstruating women irrespective of age DO NOT go to a Fire Temple.

These are 2 factual statements. Rest of the propaganda / agenda being launched using me as bait is well just that … bait.

As far as those who jump the gun regarding women visiting friend’s place with a sanitary napkin dipped in menstrual blood — I am yet to find a person who ‘takes’ a blood soaked napkin to ‘offer’ to any one let alone a friend.

Why Her Statement Is Still Strange?

There have been some reports on how Ms. Irani’s statement was taken out of context since she was allegedly responding to a question of how someone was planning to take a sanitary pad to the Sabarimala temple as an act of rebellion.

In the past few days, rumours had been going around, largely on social media and certain right-wing websites, about how an activist by the name of Rehana Fathima was going to bring a sanitary pad (whether new or blood-soaked is not clear) inside the Sabarimala temple.

All these reports were unverified and had little to no evidence to them, but the strange part is that even if Smriti Irani was replying in regards to this rumour, her statements still don’t make sense. Also, the above claims could just be fake news created for ulterior motive of religious disharmony.

But in the midst of all this, we did get some interesting reactions from netizens about Ms. Irani’s comments and tweets.

Some memes and reactions that erupted on social media with her statements:

"Would you wear a sanitary pad and go to a friend's house?" asks Smriti Irani. Duh. Yes. Most women do. What about you ma'am, would you wear one and go to work, or stay home for 5 days a month? https://t.co/lUC1CXPefu

Smriti Irani must be the only woman in India to get a period leave. I mean she won't take her blood-soaked napkins inside the sacred walls of her ministry building. pic.twitter.com/W0Y0RaSyf7

All of you out there who think "Smriti Irani" is smart, educated, articulate or even knowledgeable about the language she so fluently speaks need to look at this. pic.twitter.com/SwJiujjq2d

Why is Smriti Irani being hyped? She's a High School dropout who tried to lie that she was a Yale graduate. Her portfolio was changed thrice due to her incompetence. She's only in the Cabinet for her motormouth & verbal diarrhoea at events & on TV

hey aunty @smritiirani yes i visit friends, party, cook, dance, do Zumba when i have my period. I go to the Gurdwara too. and yes, horror of horrors, I touch the pickle jar https://t.co/zgjCu3rDxk

Is there some contest going on around making the most ridiculous statements around Sabarimala? Smriti Irani making a comparison with going to a friend’s house with a blood soaked sanitary napkin!https://t.co/Eg3YeWbG5C

What Is Sabarimala Temple Violence Issue? Why Is This Temple So Important? Which Lord Resides Here & What’s His Story?