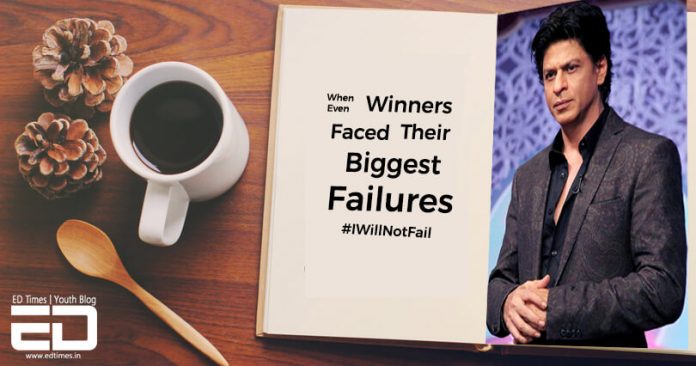 So the next time you think that subject you didn’t get good marks in, or that person who didn’t like your picture on Facebook, and want to give up on life, then just take a look at these people who even after experiencing crushing defeats, came out as winners. Use it as your motivation, as your determination, because success does not come easy. If there is one person in Bollywood who deserves the fame he has achieved, anyone would choose Shahrukh Khan in the blink of an eye.

He is the most revered actor of his generation and the generation after his. Belonging from Delhi, he struggled his way up in the Bollywood and became the “King of Romance” and has been so for a long time.

SRK lives in his lavish house Mannat, has a wax statue, has won several Filmfare and movie awards, and was also awarded the Padma Shri by the Government of India in 2005. However, the Khan of Khans, King Khan is no exception to defeats. Let’s look at some of his failures:

Shahrukh Khan in collaboration with Juhi Chawla founded company Dreamz Unlimited in 1999. The company’s first movie, Phir Bhi Dil Hai Hindustani was a commercial failure. In 2003, conflict broke out between Khan and other partners of the company and both parted ways.

After giving hits like DDLJ and Karan Arjun in 1995, Shahrukh Khan appeared in four movies in 1996. All of them failed critically and commercially. The initial movies in 1997 also flopped. His turning point was Yes Boss, where he regained his ground.

The super criticized and defamed Ra.One was the dream project of Shahrukh Khan, which obviously failed. He himself confessed how it didn’t turn out to be as good as he wanted it to be. He has further disclosed in an interview that he would definitely work on another movie like Ra.One, because he is stubborn and adamant about it.

Although SRK is a charm when he hosts award functions, his success at hosting TV shows has been limited. In 2007, he replaced Amitabh Bachchan as a host of Kaun Banega Crorepati. Later he hosted another show Kya Aap Panchvi Pass Se Tez Hai. Both these shows had limited success and fame. In 2011, he hosted Zor Ka Jhatka: Total Wipeout on Imagine TV. It became the lowest rated show ever hosted by a Bollywood star.

He Wanted To Be A Sportsperson

In Aap Ki Adalat, while promoting his movie Fan, Shahrukh Khan revealed that he wanted to be a sportsperson. He wanted to represent India in sports and play for Team India. He said, “I was good at field hockey so I was looking to make career in that. But unfortunately I got my back severely injured after which I was not able to bend and play. I was disappointed to see my dream crashing…”

Even though Shah Rukh Khan’s career had its ups and downs, he still managed to be the most celebrated actor of India. He didn’t stuck up to it and moved on.

His success story motivates millions, but his failures would motivate them, and us, further.