The Theatre of Dreams welcomed Pogba in style as Zlatan Ibrahimovic managed to put United up top with 2 goals against Southampton.

The debut for the ages, so to say. The 100-million-pound man Paul Pogba was in Mourinho’s starting XI as they hosted Southampton in the Old Trafford.

The match started brightly for Southampton as they started off with some confident passing and didn’t allow United much time on the ball but even then, no teams were able to score for almost half an hour.

Southampton’s Romeu was prematurely substituted by Jordi Clasie due to an injury, which unsettled things a little for the visitors.

Rooney and Zlatan were almost invisible for the major part of the first 30 minutes until both of them sprung into life to combine for a brilliant 1st goal for Manchester United.

Valencia’s pass was well dealt by Rooney, who kept the ball in play an curled in a sumptuous cross for Zlatan, who rose above his marker and scored a thumping header to make it 1-0 to United.

With this goal, Zlatan made it 2 goals in his 2 opening games for Manchester United and 3 in 3, overall.

The half time finished with Pogba impressing the United faithful with some good runs and clever passing and United sitting pretty, playing on the counter attacks.

The second half started well for United, rather. After Martial’s low shot was saved by the keeper, Manchester United were given a penalty for a foul on Luke Shaw by Clasie.

Cometh the hour, cometh the man. And who better than Zlatan to take the penalty and make it 2-0 for Manchester United.

Zlatan made it 4 goals in 3 games for United and that’s all she wrote. Southampton had no answer to United’s goals as their efforts proved in vain compared to United’s killer touch and efficiency.

As the game went on, Pogba started to get in his groove and dictate the game, finally delivering what is expected of him as a quality player. His confident passes and steaming runs, coupled with his intelligence to read the game showed his talent on full display.

Southampton, on the other hand, continued to push forward but United were happy to wait and strike when required. With Mkhitaryan replacing Mata and Herrera replacing Martial, united played a formation to close the game in the final stages.

The only slight concern was that Marcus Rashford didn’t come on to the field, given his display of some exceptional talent last season. Other than that, it was a good, solid performance from United. 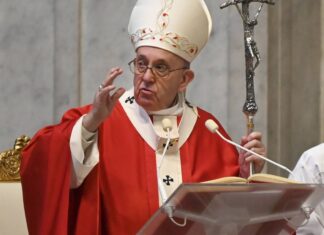 Charlotte Mondal - December 6, 2021
Catholicism is a pretty peaceful and rule-abiding religion so it is quite natural that the nuns and the priests also follow some hard bound...