Draupadi is one of the most celebrated and loved characters of the Mahabharata. She is unapologetic and courageous and exudes strength and intellect. She is the ultimate embodiment of ‘shakti’ or power.

She is gambled away, mistreated, assaulted and humiliated in the epic poem, yet brings the upholders of ‘dharma’ to their knees when she questions their principles of morality. She emerged as an ancient symbol of reform in a staunchly patriarchal setup.

Her veneration thus, as a goddess sees no bounds. Her valour and influence are celebrated till today through Draupadi’s cult of worship. 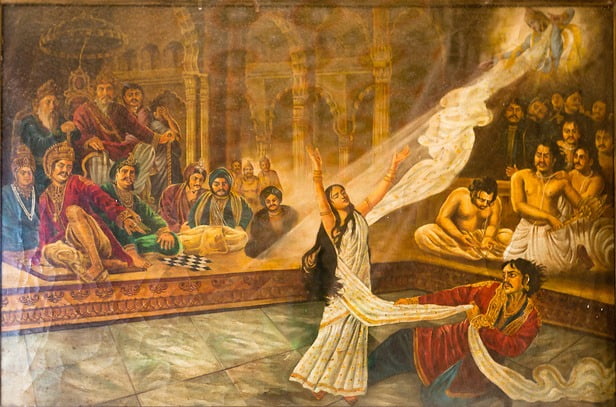 Draupadi emerged as a goddess in the local context of worship in the Tamil community. This permeated the worshipping traditions of Karnataka, Andhra Pradesh as well as those of Sri Lanka. She is referred to as Draupadi Amman and has a cult dedicated to her of the same name.

The cult celebrates Draupadi as a village goddess and is present in small pockets of South India. She is seen as Grama Devatha (village Goddess) or Kula Devatha (mother Goddess) in several among the total of 800 shrines that are dedicated to her. The cult traces its roots to the Pallava Dynasty.

Draupadi’s cult of worship includes the festival of Thimithi. It is a part of the larger festival of celebration of the Mahabharata where tales from the epic are re-enacted and rituals or puja associated with the epic take place.

Some of these rituals celebrate the marriage of Draupadi to Arjuna where the idols of the divine couple are washed with water and milk and beautifully bejewelled.

Also Read: In God’s Own Country There Is A Temple Of Nestle’s “Munch”

Fire is central to her worship through Thimithi. Devotees walk barefoot on fire embers to show their reverence for the goddess and to fulfill their wishes. This specific ritual is performed by men only.

An important part of the cult is the idea that Draupadi is an incarnation of goddess Kali. Legend says that Kali was born to assist Krishna in his bid to destroy all evil and arrogant kings of the world. This also reinforces the notion of the proximity between Draupadi and Krishna.

Draupadi as a queen and as a goddess has revolutionised the study of the epic poem as well as its interpretation. While some consider her to be the cause of the Kurukshetra war, others see her as a victim of male dominance and injustice. However, from within these spurious notions, Draupadi emerges as a true hero.

She defied one and all through her passion and intensity and forever remains immortal.

ED Originals Chirali Sharma - September 27, 2021
Over its history, the Indian sub-continent has experienced various invaders and looters who have stolen precious and exquisite artefacts, jewels, statues, art and more...