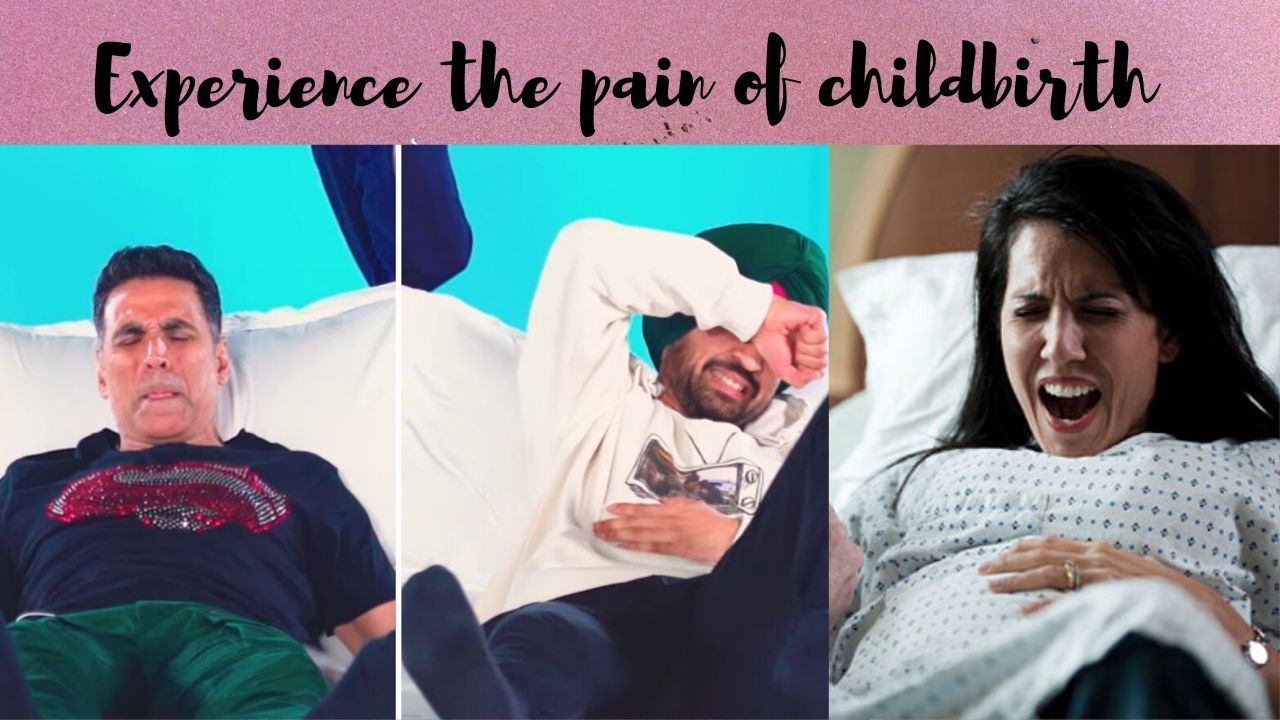 Labour pains are a series of painful uterine contractions that occur during childbirth. Due to these contractions, the infant experiences intense pressure that presses it against the cervix which leads to thinning, stretching and opening of the cervix.

Women all over the world are familiar with this medical term, even if they haven’t experienced it.

Most of us only have second-hand knowledge about labor pains, but now with the use of electro-shock pads, people can feel the pain first-hand.

To promote their upcoming movie, Good Newwz which focuses on pregnancies and a mix-up during Vitro-fertilization, Akshay Kumar and Diljit Dosanjh undertook the labor enduring test.

There are many videos on YouTube where people take the Labour Pain test. These videos may feature soon-to-be fathers who want to understand the suffering of their partners more acutely or people who just do it for the thrill of it. Either way, most of their reactions to the simulations are hilarious and make for a fun watch.

However, this method can be employed to achieve other things besides entertainment and giggles at the expense of someone’s pain. I’m not saying one shouldn’t find humor in unpleasant circumstances, I just want people to take something more from these tests. Most of the comments on such videos suggest that viewers see it as just another funny video when labor pains are anything but a funny ordeal.

There are a lot of jokes made at the expense of pregnant women. Many movies feature scenes where the unbearable screams of the wife in labor makes the man squeamish and awkward. Some jokes have also attempted to equate them with possessed individuals from horror flicks.

This test will prove that you can’t sit mute when your body is subjected to excruciating contractions. People, especially men, can be very insensitive when women try to make them understand what they had to live through during their pregnancy and childbirth.

‘It’s just a few hours, surely, you can do that’

‘Hey, you’ve already experienced it, once you’ll be more used to it the second time around’

‘Labor pain is equivalent to a kick in the testicles’

Such ignorant remarks, even when spoken without any malice, can test the temper of any woman. But this test might put an end to it. Some men think that women are exaggerating their agony about a ‘one-time incident’.

Well, maybe after taking the test themselves, they might finally learn to appreciate and respect women for wading through the nightmare that is childbirth. So, let the women enjoy their Lamaze classes if it helps them in easing their discomfort, stop making fun of it.

Learn What You’re Walking Into

I barely get by during my periods because of painful menstrual cramps, how will I cope with the distress during labor pain?

I don’t have tolerance for things that discomforting to such an extent. I’m sure there are others with similar concerns. Therefore, undergoing such a simulation might be a good idea to give women a rough idea about what to expect during childbirth. They would be better prepared to deal with it and would have better insight for making decisions about childbirth.

Many unexpected pregnancies may also be prevented by this method. Preaching about abstinence or planned parenthood may not reach the ears of couples, but one session of acquainting oneself with the vexation of labour is more likely to have an impact on them.

Afterward, they can decide whether or not using condoms because of silly reasons like ‘it doesn’t feel the same’ is really worth weathering the insurmountable pain.

A big decision that women have to make when it comes to childbirth is whether they want to use epidurals to relieve their pain.

Epidurals are a form of local anesthesia, which help in assuaging most of the pain from the entire body below the navel -including the ache in vaginal walls- pain during labour and delivery. It has some drawbacks such as nausea, itching, lowering of blood pressure, etc. Therefore, some women are hesitant to use it.

The test might help them determine their capabilities and limits towards birthing pains. The real birth may even more troubling so the test can assist them in coming to a better conclusion. If they find it very taxing, epidurals are the way to go.

The simulations are still not completely accurate to gauge the complexities and tension that accompany childbirth, but at least people can gain some cognizance about the strenuous situation. This is why I believe everyone should try it.