We live in an era where information is the most crucial currency and technology drives the world round. While we see tech seeping into all sectors, a major lag is felt in the arena of politics and governance.

Technology holds immense potential for changing the landscape of this dynamic sector, and its need is largely felt in the wide communication gap between the masses and their elected representatives.

In recognition of this major communication lag and the need for an online platform to facilitate reach and interaction of outfits working in governance and public interest, the idea of Digital Parliament was conceived.

Digital Parliament is an innovative tech-based platform for social interaction between stakeholders and associations/communities/unions/political parties.

Created with the intent of bridging the gap between political parties and the citizens, the platform intends to serve as a comprehensive, elaborate yet easy to use digital gateway for the tech-enabled young India to become an informed and active participant in politics. The app has something to offer to all stakeholders.

From the youth of today to the top executives in the corporates, all are using digital tools more rampantly which makes going online an ideal solution. It was founded by a driven group of people trying to navigate and understand the political system.

Digital Parliament is conceptualized by Ms. Harsha Mukerjee, Mr. Rajesh Soni and the technical outfit is given by Mr. Shridhar Gune.

As a part of the project, Digital Parliament’s flagship talk show, Youth Questions, will be launched on 14th June, 2020. Hosted by the founder, Ms. Harsha Mukherjee, Youth Questions is laying the foundation to connect with the leaders and to discuss things that matter for the “future of today”. 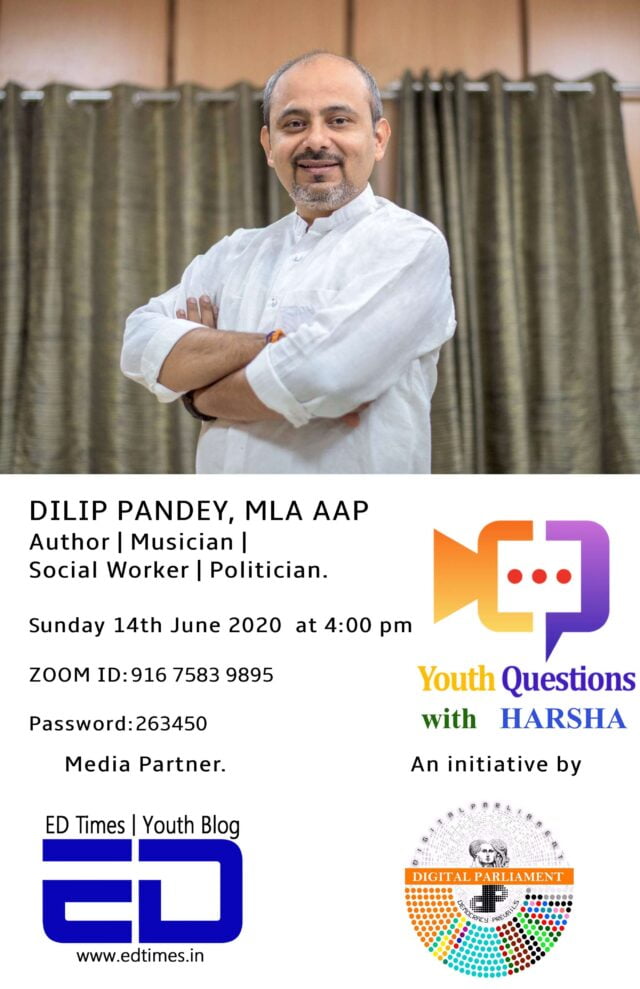 The weekly talk-show has been envisioned as a candid interaction with politicians, trade unions leaders, social workers, etc, which will take place over Zoom. A recording will be available on the YouTube channel of Digital Parliament as well.

For the first session, Mr. Dilip Pandey, MLA from the Aam Aadmi Party will be the guest. An author, musician, social worker and politician, Mr. Pandey wears many hats. A computer engineer by profession, he entered politics after participating in the Anna Movement.

He believes in the transformative power of “Jan-neeti” and has committed his life to serve others. He served as the Co-Convener of AAP during the 2015 Delhi Assembly Elections. Currently, he is the Chief Whip of the party and a DDA member.

Tune into Youth Questions on Sunday, 14th June 2020 for an exclusive tete-a-tete with Mr. Pandey, hosted by Ms. Harsha Mukherjee.

ED is proud to be their blog partner.

How To Get Verified Information In Times Of Fake News – Webinar

Finance Rishita Sengupta - May 28, 2022
According to recent news, the Indian Rupee has taken a hit against the US Dollar. On May 17 it hit a fresh all-time intraday...