Home Politics Did We Unnecessarily Glorify India’s Ambassador To The UN, Syed Akbaruddin? 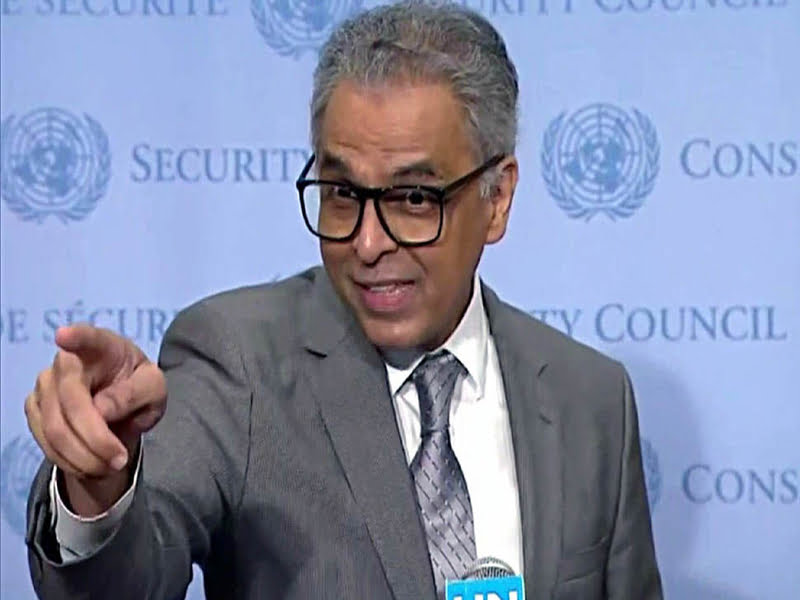 India’s recent move to revoke Article 370 which granted special status to Jammu and Kashmir didn’t go down well with Pakistan and as a result, it downgraded diplomatic ties with us.

Although this matter doesn’t concern Pakistan-occupied-Kashmir (PoK), Pakistan called it an “internationally recognized dispute” and wrote a letter to Poland, the President of the United Nations Security Council (UNSC) for this month.

Pakistan is like an incompetent kid who first picks the wrong battle, later sulks on realizing that he can’t win and therefore, as a last resort, asks his mother to fight for him.

In this case, the mother happened to be of a different nationality but came through all the same.

China asked the UNSC to hold closed-door consultation on the Jammu and Kashmir issue at the behest of Pakistan. The last time this matter was addressed by the UNSC was in 1965.

The informal meeting lasted for over an hour wherein barring China, the permanent members were of the opinion that it is a bilateral matter between New Delhi and Islamabad, and should be dealt with as per the UN Charter.

Much to the disappointment of China and Pakistan, Poland didn’t make any press statement after the meeting ended.

It was clearly a diplomatic win for India.

Also Read: What Does Removal Of Article 35A and 370 In Kashmir Mean: Good Or Bad For Future

It wasn’t until India’s permanent representative to the UN, Syed Akbaruddin addressed the media that Twitter erupted with joy.

Here are some of the reactions that glorified Syed Akbaruddin and how. 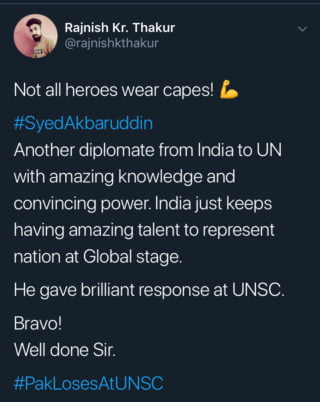 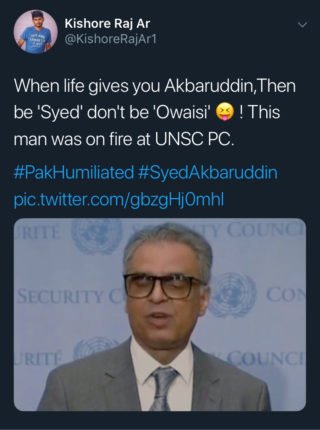 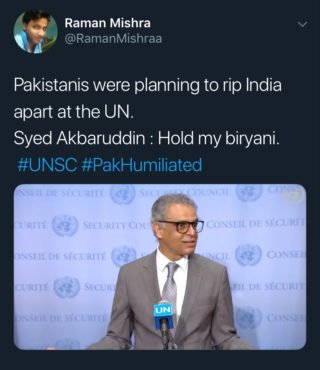 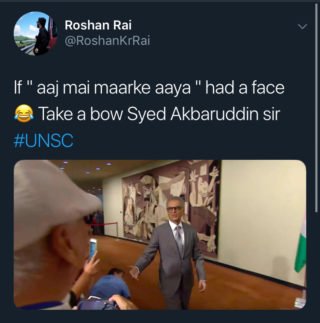 However, let me shine some light on why I think people over-hyped Syed Akbaruddin’s media address.

He began his address by saying,

“I am a newcomer with you, so please cut me some slack. This is the first time I am interacting with you.”

I would’ve cut him slack as he asked for it exactly thrice, had he not looked like a student who tried to cram the entire syllabus the night before the exam.

He was evidently nervous and under-rehearsed as he ate up a few of his words while reading his address from paper and also interrupted the journalists when they asked their questions.

Ironically, he even asked a journalist to relax before asking his question.

“I have repeatedly said that we are ready to address this issue in a bilateral manner. We are committed to the Simla agreement. It’s now for Pakistan to make the commitment, too. Stop terror to start talks.”

The above statements sum up all the ‘different’ answers he gave to around 6-7 questions asked. Need I say more?

He constantly asserted in a very animated manner that he was generous enough to answer all questions unlike his Chinese and Pakistani counterparts.

If this wasn’t enough, he also categorically stated that he answered questions by three Pakistani journalists, was “gender neutral” and wasn’t biased towards the Indian journalist.

Also, he mostly answered the questions either with a smirk on his face or with too many hand gestures, including pointing a finger at the reporters.

He was asked when India will begin a dialogue with Pakistan, to which he said,

“Let me begin by coming across to you (three Pakistani journalists) and shaking your hands.”

I still can’t wrap my head around the fact that people on social media were blown away with this response. They didn’t even realize that the ambassador used symbolism to simply dodge the question.

The little time he left himself between saying, “I will answer all questions,” and “We are committed to solving the issue bilaterally,” wasn’t utilized effectively.

He served a lot of platitudes and nothing quite substantial, especially when he was asked twice about the apparent restrictions imposed on the people of Jammu and Kashmir.

Given that the UNSC meeting’s outcome was in favor of India, he should have been sharp and articulate in his responses, but instead, he produced a lot of rhetoric.

Social media often drowns us in a deluge of information and as a result, we react rather than respond.

In their quintessential over-excitement to hail Syed Akbaruddin a hero, netizens overlooked how his brief address and responses had more symbolism than substance.

In this culture of hysteria, if we get swayed by anything insubstantial, then perhaps the meme’s on us.

Sources: The Economic Times, The Times Of India, YouTube

In Pics: This Is How Countries Reacted To Article 370 Being Repealed By India