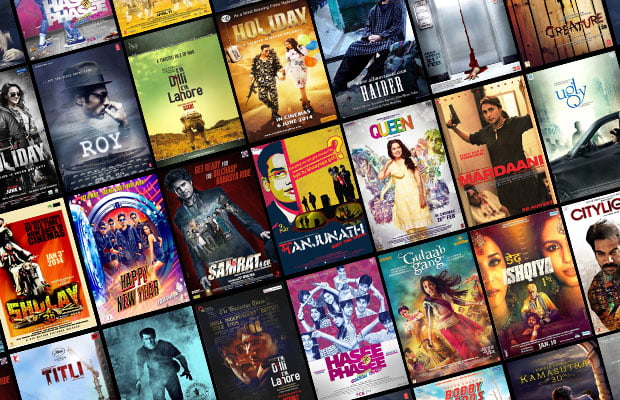 The countdown to 2015 has begun and so has the celebrations all across. Year ending reports are on its way. So, let’s pick our paper- pens and sit down to try and analyse the year gone by and how we perceived it to be.

Bollywood 2014, was all about – more entries to the ‘esteemed’ 100 crore club, stories with content gaining commercial value, nonsensical comedies witnessing empty halls and phenomena being relived. Variety was once again the spice of Bollywood, from rom-coms like 2 States to horrors like Creature 3D; action flicks like Bang Bang to content driven Queen; sequels like Dedh Ishqiya to remakes like Khoobsurat; satire comedy PK to life’s truth Mardaani. But hidden behind these genres and names are some threads (trends) which run through majority of the films. Take a look at what defines Bollywood 2014 for us- the biggest trends of this year which differentiated this eventful year from the rest.

While the heading may seem a pun on the success of Kangana Ranaut’s Queen, it makes a stronger point – Women are here to rule now. Brave roles for glamorous divas were penned down and our actresses made the films entirely their baby.  Kangana twinkled in Queen and Revolver Rani, Priyanka sparkled in Mary Kom, Madhuri and Juhi were exuberant in Gulab Gang and Rani proved the mettle of ladies in Mardaani. They clearly stole the thunder from the rest of the cast and defined their films.

Alia Bhatt, just a film old by the start of the year, gave three back to back hits. Highway, 2 States and Humpty Sharma ki Dulhania- she was clearly the actress that shone in the year gone by. The strong performance is still talked even after so many months; with almost no reference to the male co-stars.  It’s evident from the audience response to such shades and characters of women that it’s time the leading ladies set the cash register ringing breaking the male chauvinistic code. Until last year, Khans and Kapoors ruled the industry and no one was near them. Not anymore, the younger generation this time set ablaze the box office. Alia Bhatt, Parineeti Chopra, Shraddha Kapoor among the ladies scored a big with their hits like 2 States, Highway and Humpty Sharma ki Dulhania, Hasee toh Phasee and Ek Villian. Among the boys Varun Dhawan, Arjun Kapoor and Siddarth Malhotra were judged serious contenders to challenge the superstars. Many youth oriented films were made which worked solely because of their fresh quotient. Karan Johar did not have a single ‘A-list actor’ films this year and yet his production house earned both money and reputation.  The Gen Y has set their footsteps are here to rattle the superstar positions. 90s are back! On one hand where a new lot is entering the stage, the old ones are re-entering it, making it difficult for the present. Madhuri entered dancing to the tunes of Humari Atariya and made a solid comeback with Dedh Ishqiya and Gulaab Gang. “No.1”, Govinda was a delight to his fans when he dazzled the screen, in his usual avatar with Kill Dill and Happy Ending. Even Juhi Chawla chose to come to foray in a negative role with Gulaab Gang. No one left the chance to try their luck again with the Silver Screen. Rekha also tried, but her film Super Nani crashed at the Box Office. Making a comeback is the “In thing”. The television was ruled by the Pakistani Channel, Zindagi and so was the silver screen. Pakistan has always loved the Bollywood stars, but tables turned with Bollywood going Pakistani. Many Pakistani faces were seen on the cinema halls this time. Fawad Khan the heartthrob of Pakistani TV debuted opposite Sonam Kapoor in Khoobsurat and the success of the film is a testimony to how he ruled the hearts of the Indian women. Raja Natwarlal and Creature 3D also saw Humaima Malik and Imran Abbas trying to impress the Indian audience. The latest to enter this list and I would say the luckiest has been Mahira Khan. Striking the chord with her serial Humsafar; she has bagged the opportunity to be paired opposite King Khan. Jealous? The “Soap Queen” Ekta Kapoor made it big in Bollywood and brought along with her soap opera actors. Seven years ago, if you were doing TV, you were doing just that; but now the thin line between these two mediums has completely vanished. Big production houses like Bhatt Films, Dharma Productions and Bhushan Kumar gave television heartthrobs and beauty queens, the opportunity to shine in Bollywood.  Siddharth Shukla, Jay Bhanushali, Barun Sobti, Himansh Kohli, Suvreen Chawla and Monali Thakur all debuted this year. This is just the trailer, there’s a lot more to what Bollywood 2014 teaches us. Till then tell us what you think of these trends and we are sure to make your wait worth it with the next in series. Kyunki, Picture abhi baaki hai!