Amid the excitement of newly transferred cheetahs from Namibia, Africa to Kuno National Park in Madhya Pradesh, some pressing concerns are making nearby villagers worry. Villagers of Sheopur district, especially those of Bagcha village, have started to complain and protest against possible displacement due to the shifting of the cheetahs.

On Saturday, 17th September, eight cheetahs brought from Namibia were released into a quarantine enclosure at the Kuno-Palpur National Park. The aim behind this action was to re-introduce the feline species in India after it had gone extinct in 1952. But local people are apprehensive about land acquisition and the big cat itself.

Sheopur’s Bagcha village inside the 748 square feet national park had been marked out for relocation after the cheetahs’ arrival. Residents of the village have severely opposed this decision, given that the names of around 70 villagers were missing from the list of beneficiaries.

Guttu Adivasi, a Bagchi resident, said, “Whether you bring cheetahs or lions, we want our rightful share. We are leaving our birthplace, either we all leave together or nobody will”. Gutti’s resolution is to prove to the district administration that his son, Rambabu, 19, is alive. Rambabu had been removed from the list of those getting benefits after being marked as ‘dead’.

Read More: This Woman From Kerala Cut Off Her Own Breasts In Protest Against Breast Tax or Mulakkaram

Similarly, Shrilal Adivasi has been a resident of the village for the past two decades and yet could not find his name on the beneficiaries’ list. “I came and settled in Bagcha about 20 years ago when I married Omvati who was a resident of Bagcha…but despite living here for over 20 years, I’m not being considered a niwasi [resident],” he said.

Bagcha village is on the edge of Sheopur district’s Vijaypur block. Mainly Sahariya Adivasis under the Particularly Vulnerable Tribal Group (PVTG) live there and rely on sustainable forest produce for their livelihood. As per the benefits of displacement, each family will be provided with an Rs.15 lakh relief package, land for agriculture and house, and facilities like road, drinking water, etc.

While some people are worried about land troubles, others are slightly optimistic about increased tourist footfall and enhanced business. But mostly pointed out that hotels and other hospitality outlets will be run by wealthy outsiders, leaving little benefits for the local people, who will work menial jobs. 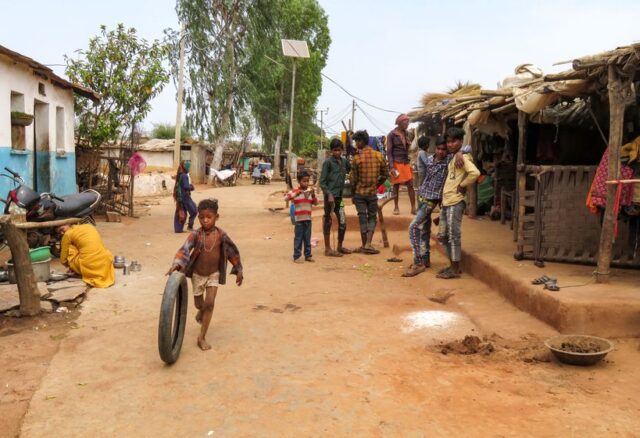 Surat Singh Yadav, who runs his tea stall on the road leading up to the sanctuary, believes in increased employment opportunities due to the new animals’ arrival. “Land prices are going up.. those having legal title of land are asking for higher prices. There is a temporary jump in business due to the PM’s programme but I can not say about the future,” he said.

Radheshyam Yadav, a street vendor selling tea and snacks on the Sheopur-Shivpuri road, expressed apprehensions. “What will happen to my small food outlet when the remaining four-five villages are shifted for the park? We are already affected financially because of the relocation of 25 villages for the Kuno Park over the last 15 years,” he said.

Why Is Media Not Covering Meghalaya Farmer Protest Over Dam Construction On Umngot River?