A new day and yet another new hashtag trending on Twitter!

Why is it so important? Well, what would you call it when it involves names like Saif Ali Khan, Dimple Kapadia, Sunil Grover, Kumud Misra, and many others?

What Is This New Show?

Tandav is the name of the show that is creating buzz for all kinds of reasons. It was released on Amazon Prime Video on the 15th of January this year.

IMDb chose to describe the TV series as the portrayal of the power play that ‘takes you inside the closed, chaotic doors of power and manipulation and uncovers the darkest lanes of Indian politics’.

Although the show failed to garner any critical acclamation, it did grab hundreds and thousands of eyeballs with its entanglement in contentious topics of religion and caste.

It hardly takes a minute for the Twitterati to take offence on anything. This time was also not a departure from the usual ritual of disliking and complaining against something that challenges a certain set of ideas and notions.

The program seems to have anti-Dalit and communalist elements in it. Twitterati also claims that Tandav has hurt Hindu sentiments. The accusation does not stop there.

Netizens indicted the show makers for making fun of Lord Shiva and Lord Ram and commiserating with the Muslims. 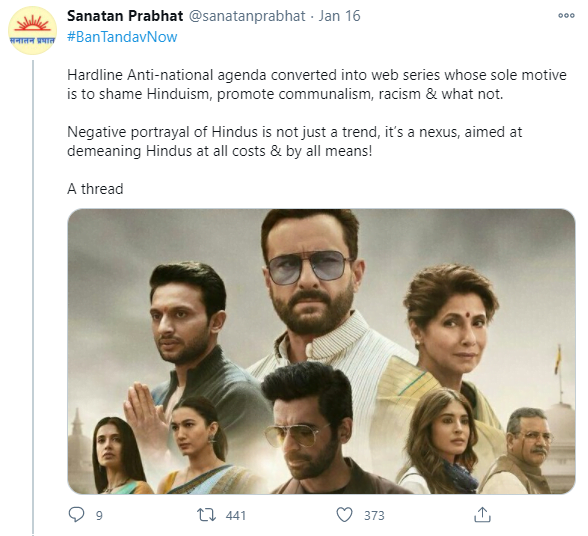 In the name of creative liberty people like @AliAbbasZafar are trying to create a rift among various castes. But on whose behest?

What Exactly Is The Root Of This Controversy?

A sequence in the series shows Mohammed Zeeshan Ayyub playing Lord Shiva during a stage performance. The play appears to have a modern take on religion with some social commentary on the present politico-religious situation, with social media taking the lead.

Also Read: Why Is The Nepali Indian Community Petitioning Against The Amazon Prime Show Paatal Lok?

First of all, Mohammed Zeeshan Ayyub, dressed as Lord Shiva, did raise a few eyebrows. After all, he is no Salman or Shahrukh Khan.

The scene that has caused all the trouble is the one where Zeeshan while holding the Trishul, says “Azaadi, what the ****?”

Although he later explains his reaction as Lord Shiva that Azaadi is not a bad thing and that the students in the college around whom the plot thickens, want Azaadi in India and not from India.

Why someone needs to take help of Hindu gods for making a movie ?#BoycottTandav pic.twitter.com/3QIKerxyTM

No matter how much explanation and justification the makers try to give, making Zeeshan use abusive language while dressed as a Hindu mythological character is too much blasphemy for many Indians to handle.

Is This Outrage Normal?

Honestly, there is no right answer to this question. Every person is entitled to their opinion, and freedom of speech must ensure that.

Some of the scenes and dialogues could have been better woven and more sensitively inserted, but that is no justification for banning the show and calling out the makers and actors.

When you demand to ban a show, you are only placating your emotions for a moment. At the same time, you take the bread out of hundreds of mouths, and you do not even realize it.

The best solution in this situation is that if you do not like something, please do not watch it. Live and let live can be the silver lining here.