Home Entertainment An Open Letter To Payal Rohatgi To Stop Spreading Her Bigoted And... 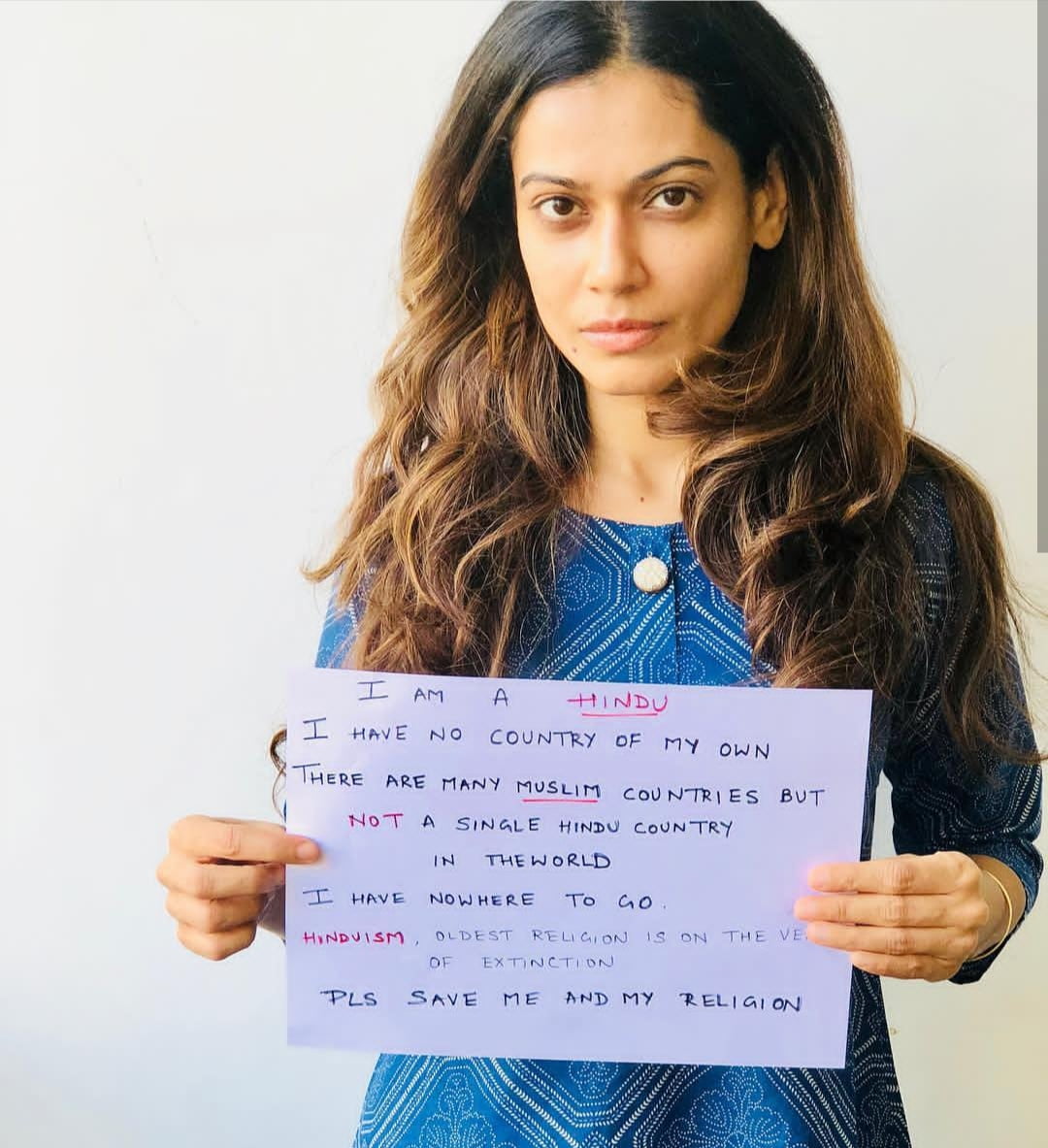 Bigg Boss fame Payal Rohatgi has been in news for all the wrong reasons, ever since she has been trying to fetch herself fame by imposing her communal and toxic beliefs through Instagram posts and tweets.

Very recently, the model commented on Article 370 and how Kashmiri Muslims should be “evicted” from Kashmir. Actress Gauhar Khan took to Twitter to call out her bigotry which led to a Twitter spat between the two.

However, what came out to be more disturbing in the clash between these two ladies is when Rohatagi blamed Gauhar for propagating ‘love-jihad’ during her relationship with ex-boyfriend Kushal Tandon.

The two were last seen together in Bigg Boss where the couple engaged in a romantic relationship. However, they called for a split after a year of dating.

Rohatgi accused Gauhar forcing Tandon to change his religion. She was later seen quoting articles from Hindustan Times as a proof for her grave accusation.

Stooping down to commenting on someone’s personal life is itself a matter of shame but doing that without proper research speaks volumes about the woman who has been proclaiming to “have a brain”.

Hindustan Times itself reported Kushal Tandon who denied any such claims about Gauhar persuading him to change his religion. Many media reports also quoted the reason for their break up to be Kushal’s alcoholism.

Despite any claims, it is not fair to judge or use a couple’s private space and talk about it on social media.

Later, Kushal even came to Gauhar’s rescue and tweeted:

It takes a person to fall in love to realize how pure and chaste is the union of two people who accept and love each other despite the caste and religious barrier that the society imposes on them.

This is not the first time when Payal Rohatagi spattered her filth on social media. Her tweets are a threat to modern India trying to rub off the lines of communal distinction.

While the entire world is battling against Islamophobia, this woman has been spreading communal hatred against Muslims in the garb of being a staunch Hindu.

Related: Why Is Lok Sabha TV Not Sacking Journalist Jagriti Shukla Even After She Is Openly Inciting Hate Against The Kashmiris?

She has on multiple occasions even used slogans like “Nathuram Godse Zindabad” and justified the murder of Mahatma Gandhi.

I wish someone could teach this woman that feminism and empowerment come from freedom of choice. A woman wearing a Hijab can be as empowered as a woman in shorts because it is her choice to wear whatever she wants to wear irrespective of her religion.

However, I am not surprised when she mocked a woman for wearing a hijab while doing yoga, ignoring her efforts and her power to prove people like her that hijab doesn’t restrict a person’s choices.

Rapists and molesters don’t wear a mask of religion when they commit this heinous crime. Associating rape with a religion is a matter of shame for any person and displays his/her ignorance.

I am an Indian, a Muslim and a feminist. I thank my stars for having Hindu friends that do not even care to mention their religion.

It is in matters like these when people like you force us to remember our religion only to remind you of our solidarity as humans and most of all as Indians.

Most people that I am close to, are Hindus who are proud of their religion but equally respects others beliefs. Unlike you, they do not demand a “Hindu Rashtra” and disrespect millions of minorities who chose their country over their religion during partition.

Do not mask your regressive mindset with the tag of being “a proud Hindu” and do not defame Hinduism that promotes brotherhood and love.

I am not sure about the kind of nationalism you follow and neither do I find it appropriate to comment on your nationality or patriotism; but for me, my nationalism comes from my respect for the solidarity of the nation.

The freedom that Gandhi and the rest of the freedom fighters bestowed upon us and the constitution that respects each and every citizen of the country irrespective of the communal lines that Britishers drew to rule.

I realize the fact that it took us 72 years of struggle and will take years in the future to whiten out any line that divides us and so I value it.

I value the efforts the country has taken to do away with the disparities, colonization left behind and so I find every person like you, a threat to the secularity and essence of our country.

The fact that you are a celebrity with thousands of followers makes it your moral obligation to choose your words wisely and not spill your toxic mindset on the people of my country.

However, if you’re doing it for your long lost fame and celebrity status then here I give you the fame that you have been desperate for. Kindly do not incite people against each other to serve your personal interests and your political ambitions.

A citizen who loves her country.

From Pseudo Secularism To Pseudo Nationalism : Indian Political Parties Have Come A Long Way To Divide And Rule